At Nalcor’s Annual General Meeting last week, CEO Stan Marshall offered up a view on Muskrat not heard before.  He has chosen to reframe the Muskrat Project as a combination of a good generation project saddled down by the burden of much too costly transmission systems.  Stan further suggested that had Muskrat energy been sold exclusively via Quebec transmission routes, it would be considered an attractive project, the envy of those other provinces still building their questionably expensive hydro projects.

In the PlanetNL17 post, entitled Exploding Transmission Costs a Terrible Blunder, the cost of Muskrat Project transmission was analyzed and found to be just as stupidly expensive as Stan says.  It’s nice to agree with the utility occasionally.  His assertion that Muskrat generation could be economic, however, is a long way from reality.  This post does some quick calculations to show that Muskrat Falls generation in its simplest guise isn’t viable in any market.

Estimating the Cost of a Muskrat Export-Only Project
Stan Marshall explained the best economics for Muskrat would’ve come from an interconnection with Churchill Falls and exporting all energy to or through Quebec.  In this scenario, the Labrador Island Link to the Island and the Maritime Link from the Island to Nova Scotia would not have been built.  That’s a lot of useless baggage removed but what’s left is still very expensive.

The main asset in this scenario is the Muskrat generation station.  The direct construction cost before financing charges is a known number at $5.5B.  That number may still have potential to swell but we’ll leave that aside. 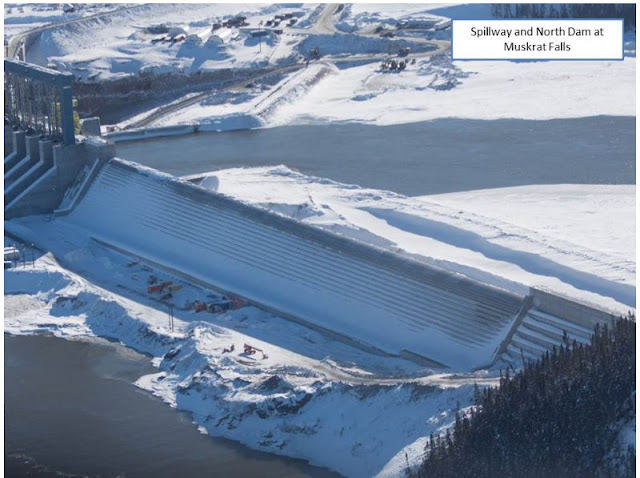 The Muskrat generating station needs connection to the grid at Churchill Falls to export the power to other jurisdictions.  This exact line was in fact built for the overall Muskrat Project at a capital cost of $0.9B.  This brings the total base construction value to $6.4B.

This analysis assumes the existing 735kV transmission lines running westward through Labrador and then through Quebec could accommodate the extra power from Muskrat during periods when Churchill Falls itself is at or near maximum output.  This is a key question the PUB needs clarity on to evaluate export opportunities.  Upgrades could add a lot more cost and may not be worth the trouble.

We’ll go lean and assume zero upgrading is needed to the existing transmission system but the threat is real that congestion on the lines may limit the potential sales opportunities on many winter days.  When the original Lower Churchill concept was mainly Gull Island with the possibility of a Muskrat add-on, an entire transmission upgrade through Labrador and Quebec was a given – what is needed just for Muskrat energy is unknown.

Annual Cost to be Recovered
As most know, the Muskrat generation and Churchill transmission interconnection were not amortized in a conventional manner.  Instead, the costs were heavily and cruelly backloaded to later decades in the 50-year financing term.  This approach to rate design would not be permissible if Muskrat were an export-only project not for domestic use.  At minimum, conventional cost of service calculations would apply eliminating the backloading.  In addition, financiers may limit the term to 35 years but again we’ll leave that detail out and stick to a 50 year term for this scenario.

Conveniently to this analysis, the Labrador Island Link uses a conventional cost of service financial methodology.  The LIL, having a base construction cost of $3.7B, computes out to having a $380M annual cost of service in 2021, inclusive of financing costs.

Applying the same ratio of annual cost to total construction cost, Stan’s Muskrat for export scenario, having a construction cost of $6.4B, comes out needing about $650M annual revenue requirement to be a passable project.  Considering the project may have higher financing charges than for the LIL, a lower debt to equity ratio, and no Federal Loan Guarantees, the true costs are likely to be a good bit higher but again, we’ll simply set that aside, giving Stan’s notion a better chance at feasibility.

Required Selling Price of Energy
For this analysis, it would be reasonable to use the same firm output of 4.6 TWh as is expected to be delivered to the Island grid.  Losses via transmission through Labrador and Quebec to US markets probably won’t be any less.

Keep in mind, if there are periods in the winter where transmission congestion prevents selling, and Muskrat has near-zero storage capacity, total sales will suffer.  Presumably Stan would have gotten a clear water management agreement to coordinate flows and potentially store energy in the Upper Churchill.  Hydro Quebec has flat out rejected the simple ponding of energy concept Nalcor tried to impose but let’s assume Stan’s concept would have included every accommodation possible from HQ to maximize energy production and sales revenue.

This is not the only selling cost, however.  HQ transmission fees must be paid that are presently about 1 c/kWh and are likely to escalate significantly as their asset renewal programs become more intensive.  Additional transmission fees await in other markets.  The minimum wholesale price needed to be paid is likely in the range of about 16 c/kWh in Canada or about 12 c/kWh USD for entry via New York.

Redo the numbers at higher equity, over a 35 term, with higher financing charges and no FLG probably drives up the minimum average required selling price 30% or more.

Cost Far Exceeds What Customers Are Paying
We can keep this quite short.  Wholesale energy contracts are coming nowhere close to this level.  In Canada and the US, major new wind power sites are being constructed at 4 c/kWh or less.  In the sunny US southwest, utility scale solar has also broken below this threshold.  Any jurisdiction now has options to build their own generation facilities and will typically do so close to their major load centers therefore avoiding upgrades to transmission infrastructure.  Why would they import power at several times the cost and incur additional costs in transmission upgrades in their own state?

Not only is high cost long-distance hydro a non-starter.  Publications like Bloomberg New Energy Finance are advising that renewable energy with modest battery support are likely to put a full stop on the construction of natural gas fired peaking plants in the US despite low gas prices.

And that’s just the economic picture.  Why too would they choose to be dependent on a long-distance supplier leaving them prone to transmission reliability risks and dependent on external governments and their agencies that are known to be at least a little bit politically volatile?

The chances of getting firm power contracts at the high breakeven rate needed for Stan’s Muskrat export concept amount to exactly zero.  At best, only a tiny percentage of power could be sold into spot markets during volatile peak demand periods, however, even those events are becoming less and less frequent as the electricity market further decouples from natural gas.

Export to the Maritimes
Stan also dangled to the media at the AGM that Nova Scotia and New Brunswick have 1700MW of thermal generation in need of replacing with greener alternatives in the future.  Here, Stan may be reaching beyond Muskrat to whisper that Gull Island would be the next great development to meet this need.

The reality is those provinces will be no more interested than American markets in paying a higher price than is necessary.  Surely, they will have learned from our Muskrat blunder how not to go about revamping their utilities and will consider a wide gamut of options.  These include load reduction through conservation programs, and then adding local wind, solar, battery, or other storage.

In addition, they will place much of that new infrastructure near their major load centres and terminal stations to minimize the cost of new transmission – that very thing Stan had pointed as definitely being too costly.  To import energy on this scale, major transmission upgrades all the way from Churchill Falls to Halifax would cost many billions.  It’s almost certain the cost of transmission alone would exceed the cost of local alternatives for supply.   Neither Gull nor Muskrat could achieve payback in competitive markets – all they could do is bleed massive losses.

Deliberate Distraction from Reality
The only way energy can be sold into other jurisdictions is to compete at the price of other energy options.  The most economic version of Muskrat as notionally suggested by the Nalcor CEO last week would probably wouldn’t get 20% of its required revenue.  It would be an unmitigated economic disaster only slightly less awful than the actual version of Muskrat being brought to completion by the CEO.

We can conclude easily that Stan’s notion that Muskrat is a good generation project is a comment made in extreme ignorance of reality.  After three years on the job, Stan Marshall really should understand the economics of Muskrat and the North American energy business much better.

Given that his predecessor demonstrated equally poor economic judgement (or worse), it appears such core relevant skills are not a required part of the job description.  The absence of these core skills in the CEO position is something for which Government and select politicians need to be held accountable for.  The action of the crown corporation CEO is undoubtedly the product of their orders.

It seems Stan, like his predecessor, is ready at the Premier’s beck and call to deliver political points.  Sounding off that Muskrat is a good project is just Stan doing his duty as the loyal supporter of his boss.  But Stan is just the warm-up act.  Get ready for the main event when Premier Ball calls an election and finally reveals his election platform.  Will he finally reveal something meaningful about rate mitigation for Muskrat?  Will he grandstand on developing Gull Island?   Or will he resist critical analysis on these issues by simply putting off decisions and hoping others will solve the problems later?