TOWNIES vs BAYMEN – WILL TEMPERS FLARE?


The matter of backup power needs on the Avalon, as analysed in PlanetNL23, brings into focus a bigger issue about fairness to the many off-Avalon ratepayers.  Nalcor’s Reliability and Resource Adequacy Study confirmed that Muskrat energy is to be delivered specifically to the Avalon end of Island grid to meet Avalon power needs.  The future addition of new Combustion Turbines (CTs) is also a response to  an Avalon-specific risk issue. The issue is not a new one – just an ignored one.

The high cost Holyrood Thermal Generating Station existed principally to satisfy Avalon winter power needs while the off-Avalon portion of the Island Interconnected System (IIS) was essentially self-sufficient on low cost hydro-power.  Despite this inequality of need and inequality of cost of power, all IIS ratepayers pay an equal rate.  With Muskrat rate increases just around the corner, it’s time to put this issue under the spotlight and propose a fairer allocation of costs.

Backgrounder
The entire Island has been treated as one homogenous energy market for decades.  Whether a customer lives in an easy to service urban area or in a distant remote community, if they are on the IIS, all customers within a specific class (i.e. residential, commercial) pay the same rate.  The distinctions in service cost across different parts of the territory are completely blurred.

In recent decades, other jurisdictions have abandoned the large highly integrated monolithic utility structure in several ways.  In some areas, generation, transmission and distribution operations have been separated out as independent businesses.  Further competition can be enabled as monopoly operators are eliminated or broken up.  Large geographical zones can also be subdivided to more accurately reflect the true cost in different service areas.  Proper segmentation of service areas can reveal more accurate data to guide customers, utilities and regulators to identify opportunities for improvement.  This post concentrates mainly on the last point: segmenting the Island into more than one rate zone.

This post comes with an up-front warning that this issue seems to have avoided discussion and analysis for many years, and it is sure to stoke controversy and provoke more questions than answers.  A detailed study would surely be warranted to identify boundaries and to calculate cost of service in previously undefined areas.  In lieu of extensive data, the analysis is kept to a high level.

A Fair Rate Idea That Won't Shock You

Avalon CTs and Holyrood
While preparing PlanetNL23, the unfairness of the single rate zone that is the IIS kept rearing its ugly head.  It started with thinking about the massive new CTs that are so clearly needed as backup to the Avalon region in the event either Muskrat Falls generation or the Labrador Island Link has a winter-time failure.

The first question of fairness is whether all Island ratepayers should share equally in paying for the Avalon backup CTs.  How is billing an extra 1.5 c/kWh to all ratepayers across the IIS fair when only those on the Avalon receive a direct benefit?  Wouldn’t off-Avalon ratepayers be dead to rights to demand that such a cost not be put on their bill?  Shouldn’t Avalon ratepayers pay the full impact for the CTs instead?

The next and biggest question of all is the enormous cost of the Muskrat Project.  If it is principally for the Avalon, isn’t it radically unfair to allocate its costs equally Island-wide?

Defining the Zones
The critical Avalon-zone is generally the area served principally by the Sunnyside Terminal Station and simultaneously dependent on Holyrood winter energy supply.  NL Hydro and Newfoundland Power would have to clarify the absolute boundaries but it’s assumed to be south of Sunnyside as depicted in the transmission map below. 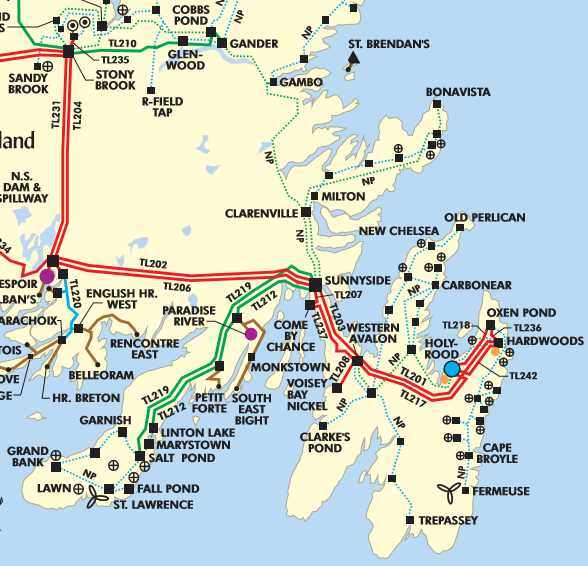 
Splitting off an Avalon zone will divide the Newfoundland Power service territory as shown another map below.  There could be additional splitting of the zones although too much change at once would be very challenging to implement.

The first extra division to propose already exists in the remote areas of the Island where distribution is delivered by NL Hydro rather than Newfoundland Power.  Hydro tracks costs in these rural regions and they are known to be significantly more costly to administer than the rest of the IIS (evidence of this is easy to find in the GRA documents).  The NL Hydro served area could easily become its own rate zone area. 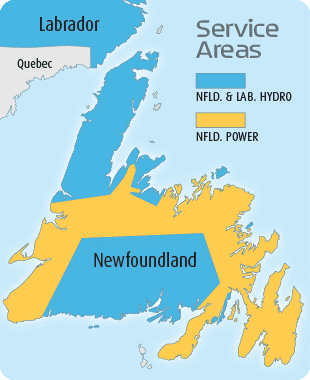 Distribution Service Areas (source: Newfoundland Power)
While these off-Avalon zones should be relieved of Avalon energy cost premiums, it is only fair for them to pay their actual cost of service which is likely to be higher than the average on the Avalon.  It’s also possible that in a full PUB rate-design hearing examining rezoning, a small incremental portion of Avalon energy sources could be found to be essential to the reliable operation of the balance of the Island.  Given both issues, off-Avalon rates may not decline much or at all, but they also wouldn’t be unfairly subjected to major cost increases levied for system upgrades they didn’t require.

The proposed rezoning and reallocation process could deliver rate stability and fairness to most off-Avalon ratepayers.  This group does not need Muskrat rate mitigation.  They just need a fair deal for the system costs as they use them.  Rezoning is a key unused tool to help refine policy for the region to the benefit of ratepayers.

As covered in PlanetNL11, the appropriate rate mitigation tool for the Avalon region is a full prudence review of the Muskrat Interconnected Project.  The Commission of Inquiry has already revealed overwhelming evidence that Muskrat was the wrong project at the wrong time to meet the wrong needs.  As former Premier Tom Marshall said from the stand at the Inquiry last week, there is no reason the PUB cannot be authorized to conduct a thorough review – a prudence review.  It simply must be done.

Doing so as part of the PUB’s recently initiated Rate Mitigation hearing process would provide a fair cost estimate for a legitimate solution to replace Holyrood.  A prudence review would develop legitimate system planning alternatives that were expressly avoided or unfairly sabotaged by Nalcor.  It would also be based on a real load forecast, not the inflated imaginary forecast Nalcor touted to justify an oversized expansion project.

As presented in PlanetNL21, Conservation and Demand Management should have been front and center and was the least cost tool to mitigate Holyrood costs and might have potentially decreased rates in the long-term.  As noted in that post, however, backup CTs would add back some extra costs.  The anticipated bottom-line had such an alternative been adopted in a rezoned Avalon might have been rate stability or a subtle rate increase only.

Antidote for Political Interference
By maintaining a single Island rate zone, all data is stirred into one bucket in a way that has made decision-making and identification of needs and opportunities very inefficient and inappropriate.  Bad utility decisions get approved because the rate impacts are low when spread among all ratepayers.  Separation of rate zones would give bad decisions less place to hide.

The single Island-wide rate zone is also ripe for political interference.  The proposed division of rate zones would make it more difficult for politics to force bad decisions on the operations of utilities and the public would smell a rotten egg much more easily.

The creation of at least two zones would also lessen the preference-bias for decisions that benefit the Avalon at the expense of others.  The Avalon is the home of centralized Government decision-making, utility executives, and most big business and political influencers.  By segregating the utility system, pro-Avalon-bias will have a harder time getting traction.

Splitting the IIS is not only an important opportunity with great potential to better manage our electrical utilities in the long-term, it can also stimulate critically needed political discourse in the short term.  While stirring up old Townies vs Baymen animosities wouldn’t normally be encouraged, a bit of a tussle where Muskrat and electricity rates are concerned just might be the thing to ignite meaningful political debate.