The DARK-NL investigation being undertaken by the Public Utilities Board is playing an important role and not just by getting to the root cause of the Province-wide power outages last January.

Robbed of the protection a narrow reference afforded Nalcor, during the 2011 PUB review of Muskrat Falls, the Crown owned corporation must now answer new questions posed both by the PUB, interveners, and others relating to security of supply after Muskrat is commissioned.

The new information illuminates the deficiencies in Nalcor’s filings with the PUB, in 2011, and exposes key aspects of a plan which ought to have been released at that time.
The Public may now finally understand Nalcor’s true intent for the Province’s electrical system when the interconnections with both Labrador and Nova Scotia are completed.

Let’s begin by asking: what has been identified as substantially different from the plan first proposed by Nalcor, in 2010, and what are the implications?

One of the major issues with the original Muskrat Falls PUB review was that it was intentionally restricted, by the Government, to the island supply case only.  It did not consider the Maritime Link interconnection and delivery of 167 MW to Nova Scotia including during “peak” periods. Nor did it acknowledge the potential additional revenue from the export of surplus energy.

The original PUB Inquiry was useful for its analysis of the project as well as for the transparency it provided. But the process, without inclusion of the Maritime Link, was seriously undermined because the plan the PUB was asked to evaluate was not the one Nalcor had in mind.

Questions addressed to Nalcor, in relation to the Maritime Link, were not answered; they were deemed by that Corporation outside the scope of the reference question.  As a result, concerns regarding the ability of Muskrat Falls to meet peak winter demand on the Island, and supply 167 MW of power to Nova Scotia, failed to get the notice such a fundamental issue warranted.

The implications of this issue for higher costs to consumers and unplanned thermal (oil) generation, in order to meet our “peak” power requirements, are significant. As a priority, Nalcor should answer immediately the impact this commitment to Nova Scotia will have on Island electricity rates.

The Exhibit, below, is proof that Nalcor did not want to expose a major weakness in its case when it argued Muskrat was the best alternative. The revelation would have skewered the project as the lowest cost option.

Consider this question posed to Nalcor and its response: 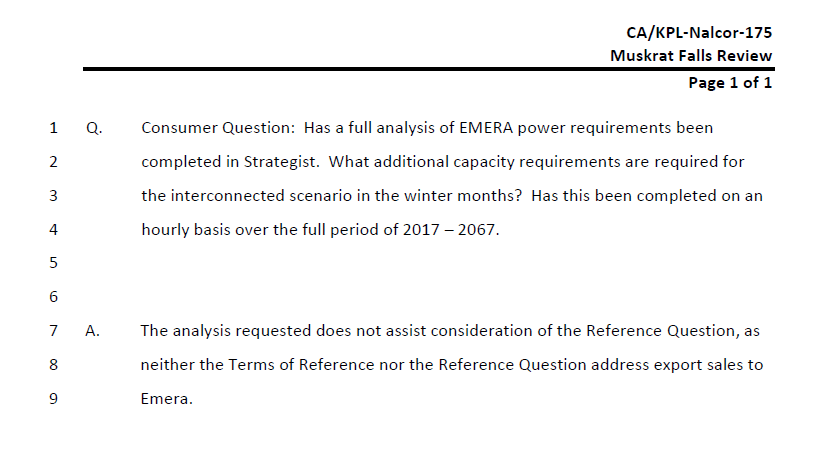 Though Nalcor refused to acknowledge then that the Nova Scotia Block was a key issue to in the Island’s winter demand forecast, one also central to the issue of the project’s viability,  it was assumed by the Author that Nalcor had, at least, included the commitment in its analysis of the project.

The assumption, taken to its logical conclusion, suggests the LOLH reliability calculations  (a resource planning model used by Nalcor) presented to Manitoba Hydro International (MHI) and the PUB included delivery of the 167 MWs to Nova Scotia; it was also assumed that the timing of those obligations were accounted for.

The issues are critical because, if Nalcor is forced to burn additional oil in order to meet ‘peak’ demand in winter, the earlier requirement for new generation could materially add great cost to the equation used by Nalcor’s accountants (Cumulative Present Worth Analysis (CPW)) in order to conclude Muskrat Falls is the lowest cost option.

Described another way, although the Maritime Link was excluded from the PUB review, the Author assumed that the Nova Scotia Block was accounted for by Nalcor, Manitoba Hydro, Navigant and the PUB to determine that Muskrat Falls was the lowest cost option.

The assumption was wrong.

Nalcor recently posted on its web site answers to questions raised by Mr. David Vardy¹ and others, including this one, which bears on the subject under discussion:

The months January-May represent the period of ‘peak’ demand.  The acknowledgement, by Nalcor, that only 673MW, not the 830 MW capacity will be available, confirms a serious omission in its representations not just to the PUB, but to its own Consultants.

The reply to Vardy’s question verifies that the work completed by Nalcor and validated by MHI and Navigant, as third party expert verification of Nalcor’s analysis, was not reflective of the true plan the Agency had in mind.  The revelation undermines three years of public debate, in which the arguments presented for the project were grounded in analysis based upon the wrong information.

Little wonder that the PUB stated in its Report To Government that “(t)he information provided by Nalcor in the review is not detailed, complete or current enough to allow the Board to determine whether the Interconnected Option represents the least-cost option….” !

No longer protected by a limited reference question of its own design, Nalcor must now answer the PUB’s concerns regarding the adequacy of power to meet the Province’s needs after the commissioning of Muskrat Falls.  Nalcor cannot answer questions selectively this time; its information must be based upon the entire project, including those commitments made to Emera of Nova Scotia, which have been confirmed by the UARB in that Province.

The Exhibit below was issued by Nalcor in response to a question from the Consumer Advocate.  It provides a glimpse of the post-Muskrat plan. 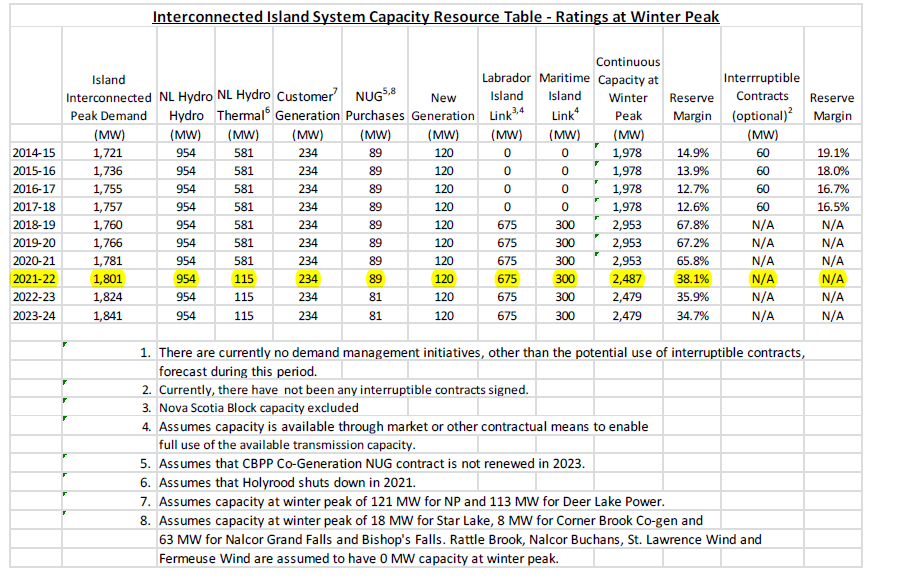 The Table demonstrates that we will be dependent upon Nova Scotia to provide up to 300 MW of capacity to meet the required contingency levels at "peak" demand.  While the Table contains a lot of data, I would refer you  specifically to the column titled “Maritime Link” in which a 300 MW capacity from the Link is indicated commencing 2021-22.

Nalcor has not verified if firm contracts have been executed which permit this supply; nor has it confirmed if any additional costs for this power will have to be borne by the NL rate payer.  If additional costs apply to its procurement, we need to know if they are already included in Nalcor’s rate projections.  Note 4 of the Exhibit, attributed to this power allocation, is hardly definitive.

Within the original Muskrat Falls Review, the amount of oil consumed for thermal generation post-Muskrat was limited.   Nalcor must now also disclose how much oil will be burnt each year in order to meet our demand requirements.

In summary, Nalcor must clarify:

1)       If, post-Muskrat, we will be burning oil, in Holyrood, to meet our obligations to Nova Scotia.
2)      If the Island ratepayer is responsible for the additional oil generation.

3)      When the additional fuel is added, is Muskrat Falls still the lowest option…was it ever?

4)      If 675 MW is still coming from the LIL.  The number seems to neglect any allocation of Muskrat Falls’ capacity to Labrador Mining.  The 75 MW allocation to Alderon will exacerbate the power shortfall on the island.

Finally, we must challenge the Government and Nalcor for spending resources on MHI, Navigant and the PUB to review a scenario that was meaningless for any purpose, except possibly to permit them to ‘sell’ the project to the public.

The people of Newfoundland and Labrador have been exposed, perhaps, to the greatest ‘Snow Job’ in our history.  If the consumers of the province are expected to pay additional rates to meet the delivery of 167 MW to Nova Scotia, the proposition is worse than a deception; it is a corruption of governance.

The PUB should be mandated to investigate the matter.

The full truth needs to come out.


[1] Dave Vardy should be commended for his personal effort in raising questions to Nalcor regarding the Muskrat Falls.  He has done a yoeman service to the Province in raising awareness of issues such as the one discussed in this piece.


To recent readers unfamiliar with "JM", I would say that, while circumstances require his anonymity, his credentials are his professional expertise,  his technical knowledge of the Muskrat Falls project and the high level of analysis he brings to the subject.