SOCIAL PROGRAMS TO BE CRUSHED BY MUSKRAT SUBSIDIES

PlanetNL2 – Muskrat Will Cause Monumental Government Debt and Social Pressure
In last week’s inaugural PlanetNL, the post-Muskrat rate hike was predicted to rise quickly into the 30-35 c/kWh range and then to continue to spiral upward as the market continually fails to deliver required revenue.  This pricing model should be considered theoretical because it’s too insane to think the Government would actually allow rate runaway to happen and not attempt to intervene with a better alternative that can preserve stability of the market and the survival of the utilities that serve it.

Logically, Government must limit rates to some sustainable level that ratepayers can bear.  They must also not allow the bankruptcy of NL Hydro and the Nalcor companies as this would lead to the evisceration of core Government assets to outside interests.

Government has little choice but to lean heavily on the public purse of the taxpayer to make up the shortfall in utility revenue. 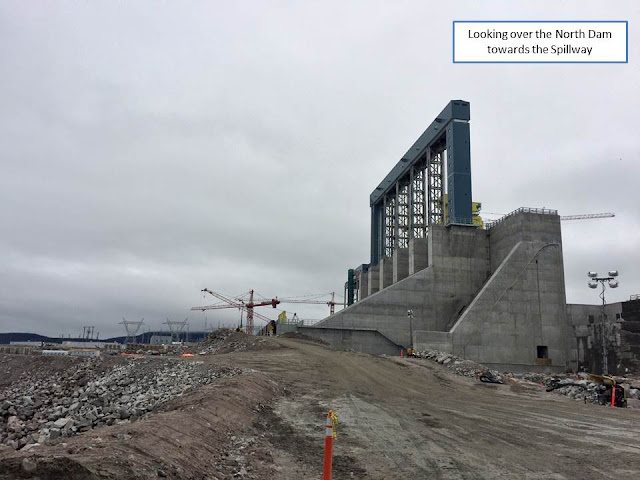 Government on the Hook
Government has the exclusive authority to decide what rate the market might reasonably bear and then accept that the difference must be provided by an operating subsidy.  Two months ago, Premier Ball indicated in an article published by The Telegram that his Government is aiming for a domestic rate of 17 c/kWh and he acknowledges a $400M deficit that Government will have to pay.  A link to the article is provided below in the References section.

The 17 c/kWh level is still 70% higher than rates of recent years and sure to cause substantial energy sales contraction as consumers of all types adapt by reducing consumption and fleeing to non-electric or highly efficient electric heating options.  As explained in PlanetNL1, NL Hydro production and sales would likely plunge from 7000GWh to 5000GWh thereby eliminating any domestic demand for Muskrat Falls power.

Allowing that industrial customers will get negligible increases on their already deeply discounted rates, the total island system utility revenue will rise from $700 M to about $800M.

This increase of merely $100M will come into effect with the proposed 13% Hydro rate increases in 2018 and 2019.  Revenue growth from rate increases will be effectively exhausted before Muskrat start-up in 2020.  Muskrat payback shall evidently be allocated 100% to Government.

Measuring the Revenue Chasm
The required utility revenue inclusive of Muskrat payback was shown in PlanetNL1 to be at least $1350 and possibly up to $1550M even with Holyrood fuel savings factored in.  Choosing a value in the middle at $1450M and then subtracting the maximum realistic ratepayer revenue amount of $800M leaves an annual shortfall of $650M.

To reduce this deficit, the NL Hydro and Nalcor electricity lines of business will be asked to look inside their operations for opportunities to reduce costs or raise revenues in their other markets.  Labour costs will be the biggest target with possible tactics including a salary freeze, wage rollbacks and some layoffs or attrition through retirements.  As over 90% of Hydro revenue occurs in the Newfoundland island market, little will be gained by attempting to raise rates elsewhere.

In total, Hydro and Nalcor could scrape together at most a few tens of millions in operational savings and revenue adjustments leaving Government to face a minimum subsidy in 2021 of $600M.  How then does Premier Ball have it measured at $400M? 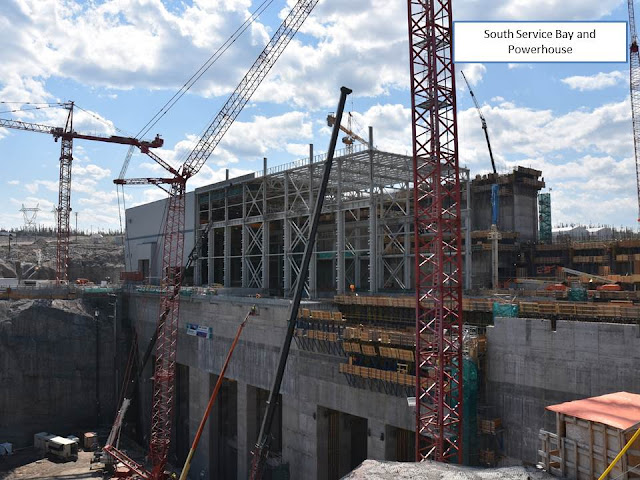 Giving Up Dividends
Nalcor has a formal 50-year Muskrat operations cash flow forecast of all dividend income anticipated to be delivered to Government as return on equity: this document, updated by Nalcor since the June 23, 2017 Muskrat project update, was recently obtained through a Request For Information (ATIPP) - a link is provided below.

Before assessing the expected dividends, recall that the Muskrat project was initially promoted to the public as a project ratepayers would affordably pay the entire cost of through reasonable and fair rates while the export cash flows were supposed to be the gravy that would make Government rich.

In the first instance, ratepayers will not find 17 c/kWh affordable and fair.  It will be the highest electricity rate in the country.  In the second instance, in the first year in which payback is required, 2021, the total dividend estimate of $185M is not especially rich.  It’s barely 1.5% on total capital and just 4.6% on the Government’s $4.0B in equity.  These are unimpressive returns.

What’s worse is that Premier Ball seems to be indicating that his Government will decline to accept the dividends – this appears to be how he limits the required subsidy to $400M.  Reading deeper between the lines, if no earnings are returned from the project, there will never be payback on equity: Premier Ball is tacitly acknowledging that Government’s $4.0B equity investment is going to be a complete loss.

Readers are cautioned that while the forecast of dividends does show substantial earnings increases over time, which may encourage them to think the subsidy is temporary, be aware that the Muskrat Power Purchase Agreement (PPA) payments are rigidly set to escalate at a near identical rate.  If electricity rates are to be held to inflation to protect ratepayers, the higher dividends are needed to meet the higher PPA payments.  The $400M subsidy is likely a permanent requirement. 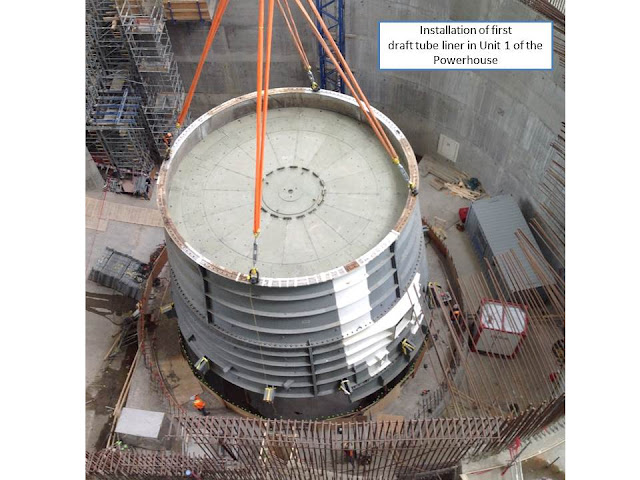 Mega-Debt: The True Cost of Muskrat
The Province’s $4.0B equity investment has bigger problems than just being written off without payback, as terrible as that is.


This $0.5B extra cost within the Treasury is a nasty hit but there are far more costly burdens waiting to happen.  Absent dividend income to pay back the equity investment, a complacent Government will simply borrow more money to pay the subsidies and the growing annual interest costs.
Long-term financing interest cost sensitivity is huge. The difference between the interest and inflation rate is key to estimating overall present value costs and while presently the Province’s credit rating may allow it to borrow at the low end of the interest spectrum shown, the premium over inflation  will rise substantially if the credit rating declines as it surely will.
The chart following summarizes the estimated present value of the subsidy and the lost equity.  The low end 2% interest premium range is not truly credible for the long haul.  A net loss of $50B or greater would be quite possible. 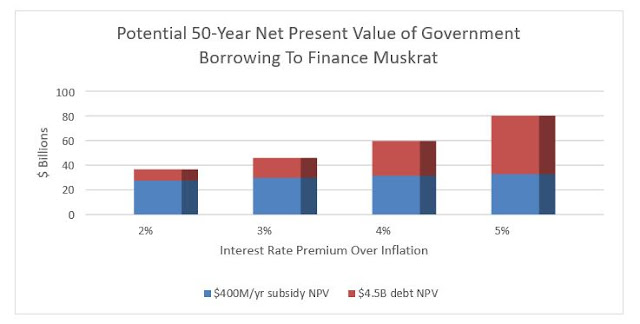 Severe Societal Consequences
The impact on the Province and all citizens of a $50B loss is largely beyond the scope of this analysis.  One thing is for sure: other program spending in all Government line departments will be severely squeezed.

Government can’t go on as the big spender and the big borrower.  The Muskrat PPA and contracts are entirely inflexible – Government must contribute whatever subsidy is required or else default and lose everything.  A Government committed to subsidy will instead look at its spending and would be compelled to slash and burn everything else and raise taxes and fees to untested levels.

The implications are overwhelming and public consideration of such a severe worst-case scenario is rare.  Attempts were made to write about it here but deleted – the consequences are inconceivably terrible and there would be better authors to prepare such an overview.  As it is not the recommendation of PlanetNL to go down the road of operating subsidies, it makes little sense to write about how terrible that might be anyway.

As very capably detailed by a recent report of MUN’s Harris Centre, the province already faces tremendous challenges with aging demographics and the expected population decline of rural regions (both will contribute to energy sales decline by the way).  Those challenges multiply under the weight of long-term Muskrat subsidy and loss even if not to the magnitude of $50B if a loss-saving intervention should occur to the project.

The Harris Centre researchers might wish to consider revisiting its models in their next revision to include a considerably harsher economic scenario than they have allowed for.  One key area to explore is the effect on the Avalon where presently they presently predict modest growth in the next two decades.  As the center of Government and the principal economic region it stands to reason that it would have the most to lose when Government is forced to enact harsh budget austerity measures to slow the growth of debt.  The Avalon region could conceivably suffer the worst impact of all if the researchers input the appropriate variables into their model.

The first is overwhelming pressure on ratepayers leading to the bankruptcy and loss of NL Hydro and all Nalcor-LCP subsidiaries and their assets – a terrifying prospect in itself.

The second is long term operating subsidy leading to the horrifying financial ruin of the Province and many of its people.

Neither can be allowed to happen.

The real alternative needing urgent consideration is how to end this useless nightmare of a public utility project.

Next Post
The complete financial write-off and cancellation of the project is presented.  It’s no free ride but it’s the least worst alternative. 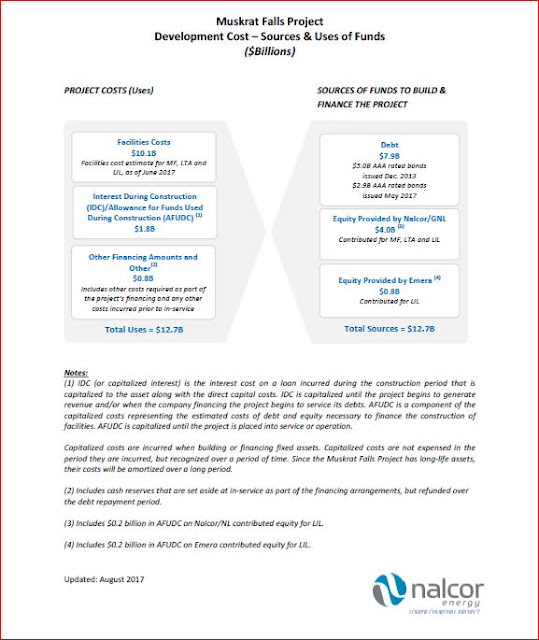