When it comes to auditing the risks and shortcomings of the Muskrat Falls project, and the incompetence of Nalcor, EY is no Liberty Consulting Group.

Plain-speaking Liberty, employed by the PUB to analyse the cause of the breakdown in service during DarkNL, persistently offered a clear narrative of what reforms might effect change.

In contrast, EY’s prescription for Muskrat is so couched in practised opacity and bathed in bureaucratization that often only the innocuous is illuminated. The Muskrat Falls Report entitled "Assessment of Implementation of EY Interim Report recommendations" is essentially a document for politicians to point towards. It is strong on neither engineering nor cost-accounting. 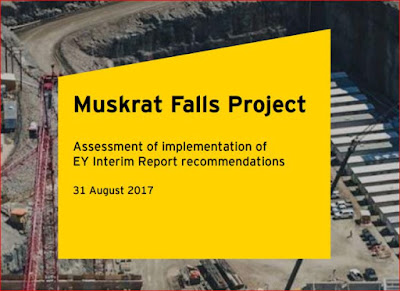 A gullible Minister of Natural Resources dwells on what can only be insincere approvals by EY about the effectiveness of the Nalcor Board and the Oversight Committee — which can’t write a publishable Report, none having been written since March and few before that date.

Nalcor’s management change — involving VP Gilbert Bennett, following the appointment of Stan Marshall and the disclosure of both egregious cost overruns and the two-year slippage of the schedule for the powerhouse — is given the exalted status of “bifurcation of the project”.

EY’s flourish even expresses concern for unused contingency funds — as if the project might suddenly be threatened by an act of prudence!

This is the kind of fluff that is perfectly suited to Minister Coady who, reporters noted, finds the Report “reassuring”.

In its 2016 Interim Report EY stated that, "The Review has been based on data and information provided by Nalcor. EY has not sought to independently verify this data. EY has had access to the Nalcor team; we have not had direct access to contractors. EY has not conducted any engineering review, physical inspection or validation of construction process." (p.7)

In all of these areas, nothing has changed about EY’s approach to the Muskrat Falls review.

Had EY bean counters taken up kayaking, they might have observed far more than they gleaned from document retrieval.

A recent trip by this blogger down the Churchill River exposed multiple new shiny trucks for an archaeological crew and a $1,900/hour (+ gas) helicopter on stand-by that could have easily been substituted with a boat and motor for a brief (almost) flat water trip upstream.  Where is the concern for cost?

The same trip exposed water-ponding at the North Spur, engineering and inspections having failed to notice the need for additional basic culverting.

Sandy hillsides exposed deep grooves over a wide area where, having been shorn of trees and ground cover, erosion by rain water was already strikingly evident.

Imagine what a good inspection of the whole project might have yielded!

The inadequacy of an already revised maintenance and operating budget was my first thought.

Worrisome, too, is the possibility that Nalcor helped write the EY narrative or at least influenced key parts of its content.

Nowhere is this deference more evident than in EY’s assertion of three additional risks for which it notes there is no contingency allowance. EY says the risks are:

Those issues could only have come out the mouths of Stan Marshall and Gil Bennett.

Significant protest is indeed a risk, though its impact to date — compared, say, to an ill-suited crony-based management team, with almost no civil works megaproject expertise — hardly even registers on the $12.7 billion estimated project cost.

On the other hand, risks #2 and #3 cited above, are not risks at all in the context given by EY. They simply constitute public policy choices.

EY had no business giving “soil removal” or “unforeseen directives” the characterization of risk — regardless of the ineptitude with which Nalcor perceives the Premier. As such, they are completely within the domain of the provincial government. Put differently, Nalcor was not elected, nor is it fit to be in the public policy making business.

The Natural Resources Minister didn’t publicly correct EY’s error, but she parrots the firm’s lines anyway and the mainstream media quotes them. Their job is done.

Still, the utility of EY’s meagre analysis is represented by the warning that “the Project retains a high level of inherent risk”. The firm states that this is the case as it proceeds towards the execution of “a series of complex and significant activities” which will command a “high planned spend rate”.

The firm cites as examples construction at the North and South Dams, continuing power plant installation, turbine and generator installation, HVdc commissioning, and the approaching winter.

Looming too, but only specifically mentioned in EY’s first Report, are those Chinese-made turbines and generators whose successful function awaits announcement only after every dime has been spent.

EY’s recommendations may make sense, except that they are inadequate. And this is where the engineering deficit of EY is horribly exposed.

EY needed to instruct Nalcor as to the virtues of making fundamental management changes in anticipation of the growing amount of complex work and a crowded schedule.

EY states that, since bifurcation of Gil Bennett’s original job, “management bandwidth available to the Project [has] improved the depth and rigour of the project controls function”. This is hardly a ringing endorsement of management’s skill-set — especially at this late date.

In that same context, EY must know that the completions contract for the powerhouse will involve up to three years of tedious work — much of it within a confined area. The work will require a level of technical management expertise that Nalcor does not now possess.

All that said, that “EY did not conduct any engineering review, physical inspection or validation of construction process” is surely one of the indictments of this Report. Evidently no lessons have been learned from New Brunswick’s Mactaquac Dam, where faulty concrete has that province contemplating demolition after only 45 years of production.

Unsettling, too, is that EY was not given a mandate to confirm Nalcor’s forecast cost and completion dates for the project:

And EY makes no mention of either the North Spur stability problem or the continued absence of a water management agreement.

While the remaining “high level of inherent risk”, to which EY refers, needs greater analysis (which will be addressed in a later post), there are few (knowledgeable) engineers who believe that the current estimate of $12.7 billion is achievable.

Perhaps none of those issues matter, anyway. At this level of project cost, apart from the integrity of the North Spur, the only real issue is whether the sanction of the Muskrat Falls project was underpinned by criminal fraud.

‘Can’t be stopped’ is Dwight Ball’s and Stan Marshall’s unproven assertion about the project — to which they will brook no opposition.

How about a more chilling observation, to which no reply is needed?