MUST THE PEOPLE OF HV-GB AND MUD LAKE LEARN TO LIVE IN HARM'S WAY?

Dr Stig Bernander, someone I have the utmost respect for as a technical expert and as a very decent and moral man, continues to try to save us from ourselves at the North Spur.
His most recent contribution - Summing Up of North Spur Stability Issues -  gets right down into the weeds. He demonstrates that based on the little data that Nalcor has, something as basic as filling the reservoir may well trigger a failure of the North Spur.
Fairly basic stuff to overlook or not worry about.

Imagine that – a well motivated older man, who has earned the right to have nothing more on his mind than trying to pick out the perfect gift for his grandchild, is torn up over what he sees as a pending catastrophe at the North Spur and Stan Marshall is up in Labrador singing “All is Well” to the local citizenry who are not in a position to say “BS” and prove it.


All because Nalcor has not done its homework and hides behind the lack of data and proper analysis.
The image below outlines the problem.


You are looking north from the south side of the Churchill River.


The Upper and Lower Muskrat Falls (yes there are two) are shown at the bottom. The white line above the yellow dashed line is the Trans Labrador Highway at about 90 meters above sea level.


All (I repeat all) the many square kilometers within the dashed yellow line are most certainly underlain by various amounts of sensitive glaco-marine clay including Quick Clay that can suddenly turn to watery mud.


The Google Earth image was taken in June 2015 and the amount of land disturbance is clear (with more since).


The proper and only sure-fire way of getting data is to drill boreholes and retrieve cores of the various underground strata. No boreholes no core – no core no reliable data – no data no reliable studies.


I have divided the whole area into three different risk or “uncertainly” zones based solely on the presence or absence of soil data.


Zone One is the “best” grading up to Three which is the worst – none of them are good. 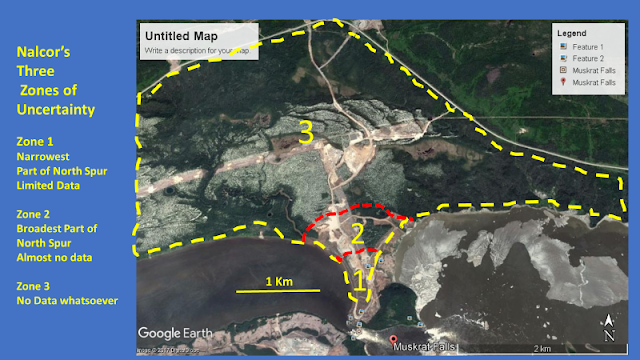 Zone 1 – area of limited boreholes giving limited data coverage especially as the underground conditions in this area are known to vary quickly from place to place where a borehole will encounter a say 2 meter sand at a certain depth but one nearby will see nothing but clay at that depth.


Zone 2 – area of almost no boreholes


The whole very large  Zone 3 area is a sloping upward time bomb of sensitive marine clay ready to let go at any moment for innumerable potential reasons – including a failure of the North Spur itself in Zone One in the case outlined by Dr Bernander in his latest report - the specific trigger will be predictably labelled as “unpredictable” in the post mortem on any disaster -- when all and sundry are running to cover their asses.


Speaking of which reminds me of an article I read in Psychology Today a year or so ago on how the residents of Oso Washington State learned to live with the risk of death by landslide.


And lest I be misunderstood, I am not suggesting that the residents downstream of Muskrat are like the homeowners of Oso. No, the poor people of HV-GB and Mud Lake are having risk forced on them.


No, it’s all those who are “in on” Muskrat that have to have build up their – “No problem at the North Spur” defense mechanisms.


I mean, seriously, how can all those top Nalcor people sleep at night with the North Spur hanging over their heads? What am I missing?


The Oso Mud Slide: Why Do We Live in Harm's Way?


Did I hear you ask “What about the insurance?”


Nice (if amoral) try but I have it from the highest authority that there is a $23 million cap on Nalcor’s loss coverage at Muskrat Falls.
Posted by Des Sullivan at Monday, December 04, 2017