If there are still surprises hidden deep within Nalcor’s crumbling walls, recent information obtained by this blogger under ATIPPA has brought at least one more of them into the light. (Another is that the once-limp Muskrat Falls Oversight Committee is exhibiting serious signs of life!)


Documents obtained from the Oversight Committee suggest that Nalcor may have maintained a secret “Management Reserve” budget for a category of risk known as “Strategic Risk”. The Reserve was kept out of the estimates for the project and placed under the control of the “Gatekeeper”, presumably the former Nalcor CEO, Ed Martin.

Nalcor evidently understood that such an allocation had important budgetary implications for the project - and for their ability to sell the scheme. But its importance was too great to let the public know anything about it.

The fund was not revealed to the PUB during examination of the DG-2 estimates — or later.
But, in addition, Nalcor also did not disclose any allowance for Strategic Risk in their DG-2 estimates, DG-3 estimates, or any estimates provided to the public prior to 2016.

Why would any category of project costs have been kept secret, or excluded?

Let’s begin here. If real “oversight” had been provided from the very beginning by a skilled and independent review group — rather than by compliant public servants — the public might have received some measure of protection from Nalcor  officials and their PR Machine, who persistently shielded the public from the critical information to which they were entitled.

Professionals with real expertise and an intricate knowledge of heavy civil construction, mandated to assess assumptions, analysis and management decisions made by Nalcor, could have saved the province millions, or even demanded that Muskrat be halted. In contrast what we received was the “token” act of oversight — put in place under Premier Tom Marshall.

That conclusion literally jumps off the pages of correspondence from Independent Oversight Committee Member, Jason Muise, P.Eng. to fellow Committee Members. You might remember that Muise was one of the independent members appointed by the Premier in April 2017.

Evidently, Muise has been asking some very probing questions of Nalcor, though if the 450-page tome that comprises the response to my ATIPPA request is proof of anything, he has received few answers.

Still, it seems Muise has extracted at least some of Nalcor’s secrets. If correct, the very idea of a secret “Management Reserve” to account for unallocated “Strategic Risk”, i.e. that it kept out of publicly-revealed project estimates, is the biggest bombshell we have heard since the “Anonymous Engineer” spoke of concerns about jiggery-pokery with the estimates. .

Muise zeroed in on how Nalcor managed its “Risk Management Plan”, which was divided into both “tactical” and “strategic” risk categories.

“Tactical” risks were described in his letter as those uncertainties associated with “the base capital estimate” including scope omissions, construction methodology, issues of performance, and price escalation. “Strategic” risks, on the other hand, were defined as those outside the controllable scope of the project, including regulatory and financial. At issue is this latter category.

In his letter to the Oversight Committee, Muise made reference to a Nalcor document that gave “guidance as to how strategic and tactical risks should be allocated in the Cost Estimate for the project”. He noted that “tactical” risk had been included in the “Original Control Budget and every revised budget… over the last four years.” He added that “… it was contained within the DG-2 Estimate… provided to the PUB… in 2012.” The allocation was $526 million or “about 16% of the estimate at the time.”

Then Muise unleashed his shocker. He told the Members of the Oversight Committee,
“However both the Project Controls Management Plan and the Risk Management plan clearly references that the Strategic risk would be covered by a “Management Reserve” which was owned not by the Project Team, but by the Gatekeeper of the project (ie; CEO of Nalcor).”

This assertion is demonstrated in the following exhibit contained within Nalcor's “Project Controls Management Plan” (see Figure 14 below). 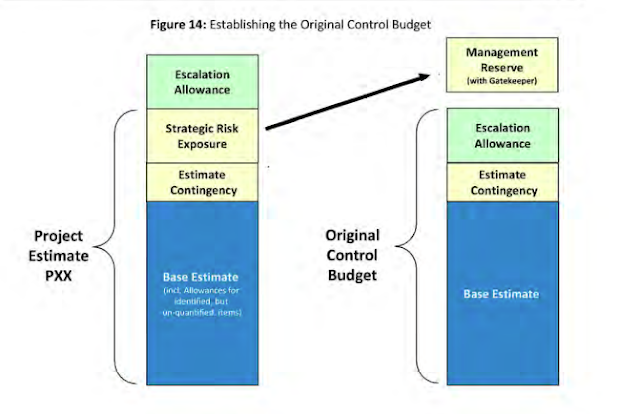 Muise mused about the allocation and observes:

“I do not believe that any cost estimate provided to the public included any allowance for Strategic risks, and I have never heard of a “Management Reserve” until I read the attached document. It is unclear if Nalcor ever maintained a “Management Reserve” outside the control budget at any time since the project was sanctioned?”

Muise correctly noted that at DG-2 (when Nalcor was trying to do a snow-job on the PUB with project estimates that were preliminary - at best having a high margin of error) they had not included a reserve for Strategic risk. He suggested that this was due to “the potential upside offered by the FLG (Federal Loan Guarantee)” which many members of the public will recall Nalcor talked up with great effect. The FLG caused the project savings because the ratings assigned to the debt by the Bond Rating Agencies were the same as those of the Federal Government.

Muise also stated that at DG-3 the potential upside offered by the FLG was also included in the comparison analysis giving Muskrat an advantage over the Isolated Island option. In contrast, complete silence followed the failure to include an allowance for Strategic Risk in the DG-3 costs.

That the “Gatekeeper” — the CEO of Nalcor — potentially held a secret Reserve Fund for Strategic Risks - keeping it out of the project Budget - is certainly a new revelation. But the revelation that Nalcor failed to account for adequate risk-related costs is not.  The problem has received attention by at least three parties.

Within the ATIPPA release, Muise noted that the Independent Engineer, acting for the Government of Canada under the provisions of the Federal Loan Guarantee, viewed the contingency fund as too low in their November 2013 Report. Section 5.1.5 of the Report discusses the Contingency used in Nalcor's financial model. On page 86, the Independent Engineer comes to this conclusion:

The Independent Engineer continues with comments that unequivocally state, based upon “similar projects… reviewed,” that Nalcor's contingency allowance is “aggressive”. Here is an excerpt with the the direct quote: 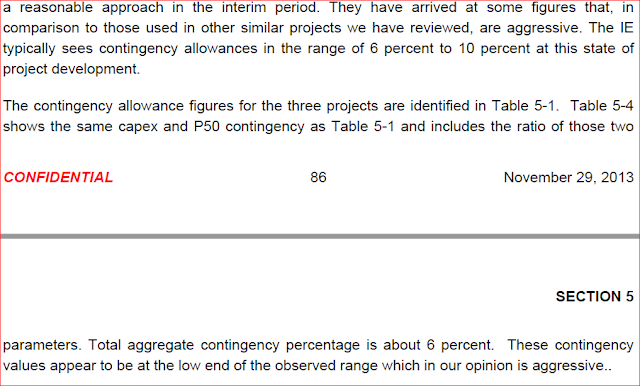 More precisely, the EY Report stated in paragraph 1.3 on page 1: “… the 2015 Forecast is not reasonable.” On the  matter of Strategic Risk, the Firm added its observations in para 1.5. The Firm's recommendations followed in para 1.6 and are shown, in part, in the following excerpt: 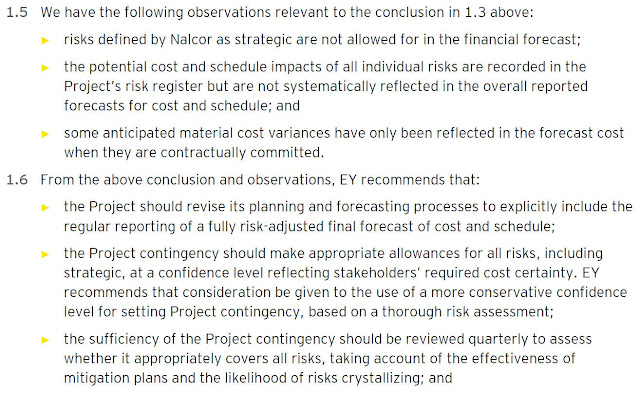 Indeed, within the 2016 report, EY concluded that “the crystalisation of risk classified as strategic was the main driver for the cost increases seen to date on the project”.

Of course, neither of those two citations caused a public stir as much as that did the now-infamous 2013 Risk Assessment Report conducted by SNC-Lavalin. The Report is infamous because it did not come to the attention of the public until current CEO Stan Marshall reported its existence to the Ball Government in 2017, and because Ball stated that it had been delivered to former Nalcor CEO Ed Martin, though he denied having received it.

“I hadn’t seen it. I hadn’t received it. It hadn’t been transmitted to me. So, you know, I have no recollection of anything like that,” The Telegram reported Martin as saying during an interview on June 27, 2017 — leaving some to wonder if he had received it with clenched fist. The CBC also quoted Martin as stating that he had no personal knowledge of the SNC-Lavalin Report.

The SNC Report and the others by the IE and EY, taken together, comprise substantial evidence that Nalcor may have engaged in practices that were designed to keep the project cost estimates, at sanction and after, unrealistically low.

As if to underscore this assertion, Muise noted that the financial impact of the risk, as SNC had assessed it, “was an order of magnitude higher than the contingency allowed by Nalcor within the DG-3 estimate.” Though that figure was slightly higher than the 2013 estimate, Muise asserted, “it did not reflect a contingency at levels recommended by SNC-Lavalin some 6 months prior.”

Having read the “Project Controls Plan”, Muise’s discovery that a separate “Management Reserve” had been omitted from the original project Budget gives authority to allegations that Nalcor may have fudged the project costs from the very beginning. Little wonder that the Independent Oversight Member expressed his frustration to the other Board Members. Here is Muise again:

“Like most followers of this project I am deeply troubled by the allegation that this report was presented to senior Nalcor management back prior to financial close of the project. But I am also troubled by the notion of a “Management Reserve” which was documented to be held by the CEO of Nalcor, but to my knowledge never communicated to the Public, or included within the financial reporting. I would like Nalcor to offer commentary on this “Management Reserve”, however I acknowledge this historical review may be outside the remit of the Oversight Committee.”

In a concluding epistle, Muise told the Committee:

“Clearly we must all agree that future reporting by Nalcor must meet recognized accounting standards for project cost control. We must also agree that for the Oversight Committee to serve any real value, that Nalcor need to provide full transparency on the future project forecast to complete, which is inclusive of any and all elements which will contribute to the final cost of the project, and have a potential impact of rates to the Newfoundland consumer.”

If a sense of frustration pervades Muise’s missive, it is one shared by many who have followed the Muskrat Falls saga. Obviously, knowledge of a “Management Reserve” was known to more than a few within Nalcor, the matter having shown up in Nalcor’s “Project Controls Plan”. This is clearly a matter for the Commission of Inquiry.

But such an assessment does not assuage the very real fact that, from the very beginning, few gave a damn — and few still do, from the CEO on down — that the public deserves to know the truth on a timely basis. Such information still has to be extracted by a process equivalent to rummaging in the dark. And, by the way, it’s not as if Nalcor was the one that pressured the Government to create an Inquiry so that it could tell all!

Finally, this new revelation should serve as a reminder to the public — and this is especially directed at former Premier Tom Marshall — that no matter how much they trust their politicians, token efforts at oversight will never stand the trial of discovery.