Crown corporations are established for a multitude of political and public policy reasons. Most, ostensibly, fill market gaps in services and activities “ignored by for-profit private organizations” and therefore deemed the responsibility of government.

A Paper by Philippe Bergevin on the website of the C.D. Howe Institute (from which the quote above was drawn) examines risks posed by the Crown Corporation model. It suggests that whether Crown corporations are “relevant” or if they serve only to “complement or displace private activity”, their policies should be limited in ways “to more clearly align them with the institutions’ core mandates and the defensible features of their economic rationales”.

This means, essentially, that a Crown corporation’s mandate should serve clear public interest objectives and not engage in overlap either within or outside the institutions of Government.

This Post is not intended to argue the larger issue of Crown corporations' suitability or their risks. Rather the intention is to illustrate, based upon recent information obtained under ATIPPA, how our failed Crown corporation, Nalcor, continues to defy its limited mandate by assuming a larger role; one  incompatible with notions of “core mandate” and the process of keeping government programs efficient and aligned. Ultimately this is the responsibility of the Ball Government, except that it refuses to rein in the Crown corporation, even though the Liberals are well into the third year of their mandate.

Since 2010, Nalcor has been duplicating well-known grant programs, some of which were government-funded prior to Nalcor’s existence.  Nalcor allocates roughly $1,000,000 anually for sums in varying amounts to a plethora of organizations. Most agencies to which it makes donations have nothing to do with its core mandate. Besides, unlike a private entity whose mandate includes community engagement (which we all applaud), Nalcor is using the very same money needed by government departments, often in competition with them.

Nalcor sprinkles public money to groups as diverse as the Atlantic Ballet Theatre, Atlantic Journalism Awards (transparency in its own shop is a greater priority); other include the National Arts Centre, the Red Cross, SPCA, a long list of Fire Departments. From Memorial University to the Petty Harbour Mini Aquarium Nalcor finds a reason to share wealth that is not its own and has no mandate to share. Even the Bay d'Espoir Happy Tree received a donation in 2015; the list goes on.

Let's be clear. All the groups on Nalcor's donor Lists are important organizations contributing to Canda's and NL's economic and social fabric. We want all of those groups to succeed. But there is a place for everything and Nalcor is not exempt from the rules that apply to other areas of government.

Anyone who performs a broad review of Nalcor's gifting program will easily see that it encroaches on the social agenda of departments like Health, Education, Municipal Affairs and Culture which have — or used to have — structures for assessing worthiness. Many of the recipients are (and should remain) the preserve of the private sector.

I don't think the public needs reminding, but Nalcor might, that it is not one of those.
If Nalcor made limited and justifiable monetary awards to groups engaged in renewable energy research or involved in energy conservation, as two examples, no one would take issue. But, evidently, that approach would not sate that Crown corporation’s agenda.

The chief recipients of this funding should be aware — like all members of the public — that Nalcor has taken the province into a financial abyss. To that point, those are funds that Nalcor must borrow, money that it has no capacity to repay; money that is added to the public debt year after year.

Why would Nalcor persist in this practice? To create a stronger social fabric? Because it believes that the elected politicians in the Legislature are doing a poor job of responding to the needs of diverse community groups and that they can do better?

Nalcor has always wanted to be the “big guy” in town, to be pervasively influential. It was Danny's brainchild; Dunderdale asserted the Crown as a place to find "international experts".  Not just from the government, it wanted a mandate from the public for its “energy warehouse”, too. Of course, Nalcor had no more skills than any other government department; probably less. Given far too large a mandate, too much latitude for screw up, it was pampered with too much money, too. Without either oversight or direction, it should a surprise to no one that it can't get basic public policy right either.

Imagine that the Liquor Corporation interpreted its mandate in the same way Nalcor does? The Newfoundland and Labrador Housing Corporation, too? Or that some other Crown corporation arbitrarily chooses to take from its budget and fund an array of charities, fire departments and arts groups that are the strict purview of line departments or the private sector?

Is this chaotic and highly selective method of dispersing grants the way the public wants the business of government to be run?

To whom would such an approach to public administration be acceptable?

Why not just hand over the budget to the Ministers? At least they are elected. And it is their job to buy friends, isn't it? Certainly they are more qualified to assess community needs than the Nalcor bureaucrats, peripatetic Board Members, or even the CEO.

Many in receipt of Nalcor's largesse will disagree that they should refuse it.

Some of them have short memories. There was an earlier time when such decisions were arbitrary, when some groups were left to die on the vine because they didn’t have the right political friends or the “right” political attitude.

ArtsNL participated in a Case Study for a book called “Understanding the Social Economy: A Canadian Perspective”, second edition, by Jack Quarter et al. It should remind some people of the bad old days. This is an excerpt:

“Even though ArtsNL is heavily dependent on the provincial government for its funding, it is argued (Bill 2009:3) that its creation involved a shift of control from the province to the arts community: It is fair to say that the creation of the Newfoundland and Labrador Arts Council (NLAC) was a very important cultural initiative of the new Peckford government… Peckford's move represented a partial transfer of power from the Director of Cultural Affairs…" (pp.124–125). The authors could have added “… in whose authority rested the survival of a good many arts groups.”

Of course, Nalcor has far less attachment to many of the groups on its list of recipients than those arts groups had in relation to the then Director of Cultural Affairs (or those who directed his decisions).

Nalcor’s donations are really about keeping a large group of people on its side, or just keeping them from exercising their civic duty when they should be telling Nalcor where to get off. They should be speaking truth to power.

Groups that don't ordinarily engage in political issues and who likely — falsely — believe they are not being made complicit with this Crown corporation are being very naive. Of course, they will say they can't be bought. The refrain is familiar. But the history of Government's ability to keep them mute tells a different tale.

Groups should know that, implicitly or otherwise, fealty is expected and the payments come with a yoke of presumed silence.

If community councils and charitable organizations think Nalcor is doing the right thing they should really go the rest of the way. They should look for complete chaos. Why not demand of Newfoundland and Labrador Housing, the Liquor Corporation, the Multi-Materials Stewardship Board, and every other Crown, a share of their budgets, too? 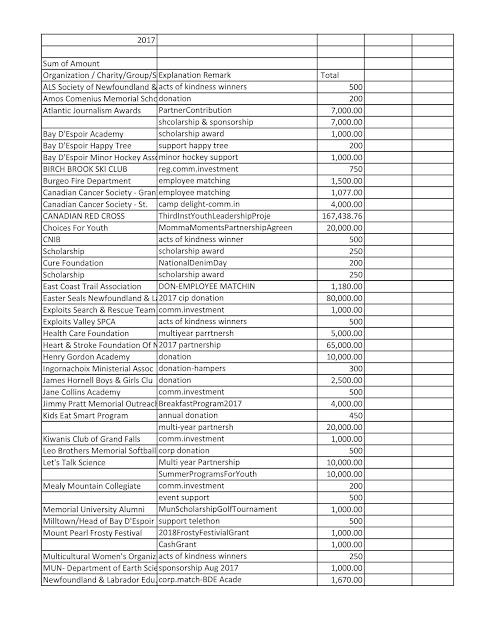 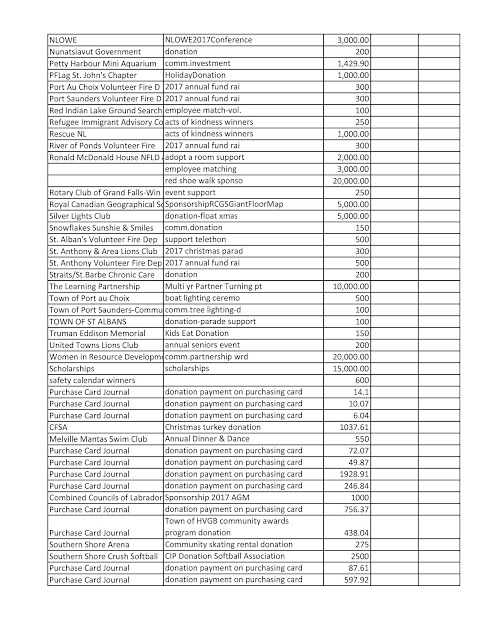 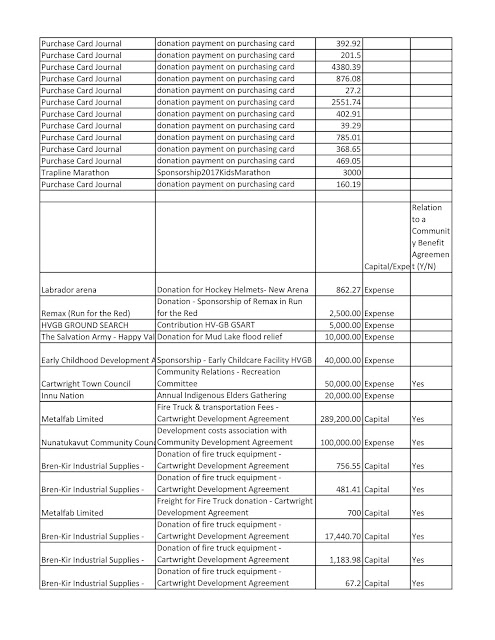 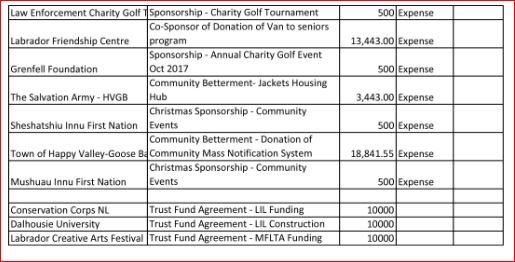 Editor's Note:
1. The ATIPPA recipient received a cover letter from Nalcor which references entries on some of the donation lists, which for reasons of clarity and transparency, the readers should be aware:
Nalcor: "You will also note some donations to "Purchase Card Journal". To expedite payment for
donations, donations may be paid using a corporate credit card. In these instances, donation
requests are received, requisitions are put in place and payment is processed on a credit card
rather than cheque or EMT. In some cases the recording of the organization and purpose of the
donation are not entered into the electronic payment reporting system, which was used to
create this record in response to your request."

2. The Editor would like to thank others for teh ATIPPA filing and sharing it with the Uncle Gnarley Blog.