The recent MQO Poll, on the performance and popularity of the current Dunderdale Government and the other two Parties, has been dissected by others.  A few additional observations are on offer.
First, to state the obvious, the NDP strength in the St. John’s area is the main story with 48% of those polled indicating support for that Party, if an election were called, against 35% for the Tories and 16% for the Liberals.  A three way split greets the Tories in the rural areas, giving them a slim lead (37%), against 34% for the Liberals and 28% for the NDP. On a province wide basis the Tories and the NDP are in a statistical dead heat with 36% indicating support for the PCs, 35% NDP and 28% Liberal.


As to which leader would make the best Premier, Dwight Ball is a washout in St. John’s (12%) against 37% for Premier Dunderdale and 51% for Lorraine Michael. In rural districts, Dunderdale is on top with 51%, followed by Ball 30% and Michael 19%.
The numbers, should they stay the same or deteriorate further, suggest the Government is in trouble, Dwight Ball is in a tough spot (even if the Liberals’ rural roots are still strong) and the NDP is the real challenge to the current leadership. The Government’s advantage, chiefly, is that it is still early in the mandate. 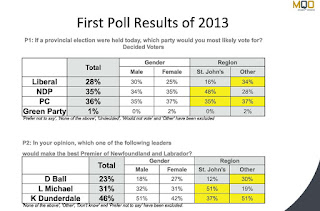 Context is important as much, perhaps, to a single group of numbers as it is to a trend; so, what is the backdrop to this Poll?  The last general election was held only 16 months ago.  The P.C Government was returned with 37 seats, the Liberals 6 and the NDP 5.  The then popular vote completes the picture.  The Tories received 56.1%, the NDP 24.6% and the Liberals 19.1%.
If, on the basis of the last election, you were thinking ‘Tory fortress’, you could not be faulted.   But, then, if those last 16 months seemed long for the electorate; likely, they were an eternity for the Government as it watched voter preference for the P.C Party drop by 19%.  It used its large majority, like a battering ram, to achieve Muskrat Falls sanction. Would anyone argue that the bloody nose inflicted on itself, for this Project and for Bill 29, was a classic example of a pyrrhic victory?
Imagine that your perch is the 8th Floor, Confederation Building and the Premier’s chief advisor and strategist had received those Poll numbers.  He (or she) has just gotten a call to digest them with the Premier and to offer an assessment.  What might he be thinking?


For this purpose, he would have looked at earlier poll data, assessed whether a trend is taking hold (a little early to draw a certain conclusion) and thought about the issues which may have influenced this result.  He would be thinking about the Government’s current agenda, the strengths and weaknesses, not just of the Premier, but of the whole leadership.  He would be divining a Plan.
Heading into the meeting the Advisor might, first, curse Danny Williams. Why?  He is one of the major reasons for this mess (context).  His ABC campaign, in 2011, caused not just the defeat of two very well placed Federal Tory MPs; his fit of pique permitted the election of one additional NDP and a Liberal MP in the traditional Tory stronghold of the St. John’s Metropolitan Region.    Together with NDP Jack Harris, all are articulate spokespeople.  They understand that St. John’s is the chief media center of the Province; it is a Tory vacuum few currently associate with the credibility creep of the NDP.


As strong as Lorraine Michael may be, and don’t underestimate her, it was Williams who laid the groundwork, wittingly or otherwise, for the rubber booters to find traction, just as a younger, educated, wealthier, less fearful demographic were being shorn of the stranglehold of political tradition.  Saddled with two choices, no more! The NDP reflects and articulates the liberal democratic views of that increasingly large group, a fact evident with the surge of popular support for the NDP and the election of three new NDP Members, in St. John’s, in the last Provincial General Election.

Secondly, the Advisor might consider the possibility that the Government’s best days are behind it.  He might even realize that the bloated bureaucracy which the Williams/Dunderdale Governments funded, for the past eight years, likely will not even vote for them!


Yes, the Government has taken a pretty good pummelling on Muskrat Falls (note the chief concern  on voters’ minds in the above graphic) and likely, on Bill 29, too. But, on a statistical level, at least, NL has never been better off.  Shouldn’t this be the best of times for a Government?
Complicating the context, however, is that barring some miracle of a dramatic increase in the price of oil, the Budget cupboard is bare; nothing new and politically sexy can be afforded without a dramatic improvement in the forecast price of oil or higher taxes (or both); the voters will have to be satisfied with the boring grind of construction cranes and the Government with the public’s underwhelming appreciation of a nouveau prosperity.

Thirdly, it is impossible to go back and invoke program expansion that contains elements of ‘gradualism’ and ‘fiscal prudence’.  The Government has acted like pigs at a bottomless trough. Worse than nothing new, in a new Budget, is fiscal austerity (cutbacks) combined with the rancor of collective bargaining.  As much as the public dislikes an oversized public service, they abhor layoffs, which they associate with hard times and insecurity. And, who can blame them.
This is already not an easy narrative to have to explain to the Boss. And, there is more.  The Premier is popular, but chiefly in the problematic hinterland where needs are as plentiful as they are intractable.  While the Party is trailing the Leader in the Polls, that may be little comfort if, in the absence of a substantial Tory uptick, the three parties divide the rural spoils.  Most significantly, Tory St. John’s is awash in “orange”.  The Premier’s own seat is located where?  Even, Tory Independent MHA is now planning to repaint his house; with certainty, the colour will be neither blue nor red.
This is a Government that needs an early term makeover, though that prospect seems remote.  The Government’s missteps have lately been compounded by an imprudent switch of the two portfolios of Finance and Natural Resources; these Ministers offer nothing to enhance the credibility of the Government and the Premier has so far, at least, failed to show she understands that empathy trumps obstinacy.  Leadership is a combination of complex qualities; the ability to close files, whether Muskrat Falls or contentious legislation, using poorly scripted bravado, is not one of them.


A female Premier, one who made much of being the first, ought to understand when female strengths need be employed and, equally, when men should be given lesser positions. Switching Marshall and Kennedy is the action of one who defers rather than of one who decides.  If she can’t make tough choices now, what will she do when the candle on her mandate burns shorter without burning brighter?
The Premier cannot win back the folks who believe that Muskrat Falls represents a serious error of judgement and an imperiled Treasury.  She must hope that the group now gravitating to the NDP, in metro St. John’s, are more upset than they are intransigent.


The Advisor’s long walk to the Premier’s Office contains but a few steps. Likely, he wishes that it was located in a remote rural town, as far away as St. Anthony; though, even this may seem an imprudent idea, given that region’s current NDP incumbency.  It is, however, a blunt reminder, as the MQO Poll confirms, rural politics, no differently than other spheres of rural life, has not stayed stuck.
The Premier’s political honeymoon has been brought to an early end; likely, a more decisive, more careful, more thoughtful leader would not have squandered so much political capital so quickly.


A Plan is called for.  But, a Plan alone won’t do!
The Premier must learn that, in matters of political survival, there is no such thing as a sympathetic public.


To the others:
Liberal Leader Dwight Ball, sincere and dedicated, must realize his leadership aspirations are misguided. Another Poll, like this one, will conscript him to the panel of the seekers rather than of the sought.


As for NDP Leader, Lorraine Michael, whatever she is doing, she ought to do more of it.
With NL politics about to get entertaining again, whose gonna have time to watch Oprah?
Posted by Des Sullivan at Monday, February 11, 2013