ROSS REID SHOULD KEEP HIS HAT ON

Ross Reid, the new Chief of Staff to Premier Kathy Dunderdale, has always eschewed steady work.  Whether as Chief to John Crosbie, as MP and Federal Minister of Fisheries, in his multiple NGO roles or, more recently, as head of a population growth strategy, Ross was always the perfect “temp”.


Ross knows when to leave; he is wise enough to keep his hat on.
Reid is capable of giving the Premier much needed help; but, she needs a lot of it.


The Premier has stumbled badly. More than one person, a savvy, experienced team is necessary to form a Plan; one that includes policy and reflects current political realities.  If the challenge is ignored, the Government may not survive the next election.
Reid will remember how Pierre Trudeau was rescued from Minority Government status, in 1972, by a combination of experienced and astute politicians and politically savvy bureaucrats. Most people won’t remember the likes of Marc Lalonde, Keith Davy, Allan MacEachen, Jim Coutts, Michael Pitfield and now Senator, Michael Kirby…but Ross Reid will.


Still, Kathy is no Pierre.  The stumbles repeat. The “Newfoundland owns Labrador” gaffe was just that, a gaffe. But, it served to remind the public of the Premier’s incessant misspeak, whether in the House of Assembly or outside.  If you can’t think on your feet, you have to be prepared to follow a script.
At this particular time, the Province needs a Leader who can think big issue politics. This Premier can’t or won’t.


Her senior advisors are less able to help her than, possibly, at any time in the history of the modern public service.  That is not so much a reflection on them, as it is on their lack of experience, operating at a senior level.
No other Premier has had the turnover of senior public servants, in as short a time, as has Premier Dunderdale. Blogger Ed Hollett, who writes Sir Robert Bond Papers, has tracked executive changes, in the Provincial Government, over a number of years. 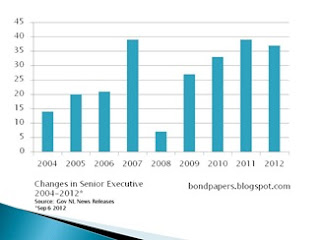 The Exhibit (left), which he recently posted, confirms the story.  Notes Hollett, “the number of changes in 2013 is on track to exceed even … 2011 and 2012…”  Most recently, the Premier replaced her three most senior people, the Clerk of the Executive Council, the Deputy Minister of Finance and her Chief of Staff.

Inexperience is the last thing a Premier needs when in trouble.  I really don’t think Dunderdale understands the depth of it.
Ross Reid is nobody’s fool; though he will have to endure several who are. (See "A Government of Fools").


This Premier had the role handed to her, enjoyed Danny Williams’ reflected glory, and within a year and a half, found herself and her Administration in third place, as the favourite of only a few.    The Premier is not just unpopular among the general public; ardent Tories, who once defended her frequent faux pas, no longer restrain their distaste for how she has unwound a potential Tory dynasty.  Many are saddened at her incapacity to relate to the electorate.


Reid can surely parse the Poll numbers.  He knows what they imply, both for the Government and his own longevity.
Luckily, he has placed himself in harms’ way before.  He has taught, or acted as an Observer, in some of the roughest countries of the world, including Iraq, Afghanistan and Kosovo.


If you see Ross heading to the eighth floor, suited in battle fatigues and head gear, don’t think him AWOL.  Likely, he knows that breaking bad news to this Premier is a bit like walking an Afghan minefield.  Lurking in the shadows, too, is the mercurial former Premier, Taliban Dan and one of his Clan, the volatile Minister of Finance.  He has frequently proven to be his own  best Improvised Explosive Device (IED).
Then there’s the Minister of Natural Resources, who has always displayed signs of Post-Traumatic Stress Disorder, even though he has never fought for anything, except the Corner Brook Hospital; even that victory remains something less than assured.


Ross does not have a lot with which to work.
Don’t expect any Facebook fiascos under his watch, though; nor will Darin King be asked to follow any more scripts hatched in the Premier’s office.  Gerry Rogers will have to write her own Press Releases from now on.


Reid will want to take away access to social media from two particular lowbrow types who inhabit the backbench.  Like the Taliban, Paul Lane and Steve Kent are not ready for democracy, just yet.
Of course, they are mere annoyances compared with the larger problems.  Just how does Reid get the Premier back on track?   See the difficulty? Even the very question is flawed.


The Premier has never defined a course; she has no Plan and no new policy unless you count Bill 29. She equates spending with vision. She performs cutbacks with all the grace of a pick axe.   Even the Finance Minister has confirmed the Tory Blue Book was poppycock, from the start.

Dunderdale vs. Kennedy; one is truly as good as the other in the art of being astute. Truly, where is there room for empathy?
I asked an Outport wit, recently, why he felt Premier Dunderdale’s popularity was so low.  He responded: “When she speaks, she doesn’t speak for me.  I don’t think she speaks for hardly anyone”. (See also "Why Dunderdale Can't Connect".


He didn’t say the problem was Muskrat Falls; nor did he refer to the Budget cutbacks of the Spring.  His words speak to isolation, to a sense of alienation from the very person with whom connecting should be easy.  Hence, the problem is not just policy; it is personal.
In the coming days Ross Reid will think about Afghanistan, often. He may wish to return.  Right now, he is facing a Provincial Government about as ready for fight as a platoon of Afghans waging war, in flip-flops.


Yes, there are optimists who think Dunderdale is just experiencing some mid-term blahs. They believe Ross will tweak the script here, put together a few photo ops there, and presto, the Polls will start to bounce back.
Good Luck with that!


Government is serious business.  If real change is coming, what might the public expect from a Premier willing to change her ways?
Real change is a Government that offers to repeal Bill 29, that agrees to open Nalcor and Muskrat Falls to the kind of scrutiny performed by the Nova Scotia Utility Board (UARB) and even more...because so much public money is at stake.


Real change would see the CEO of Nalcor replaced with one more qualified.
Real change is a Government committed to treating the House of Assembly and Opposition Parties with respect.


Real change would confirm a plan to institute a proper Budgeting process.
Real change reasserts the role of the PUB; it insists on complying with the full mandate and original purpose of the Treasury Board, the Public Service Commission and the Public Tendering Act.


And, that’s just a beginning.
Sound public administration, disclosure and accountability have badly suffered since the beginning of the Williams’ Administration.


Will the Premier defer, if Reid makes any of those proposals?  Not Likely.


Ross Reid is an excellent fellow.  But, I wouldn't get too carried away with a group who is on track only to undermine our long awaited and still nascent prosperity.

Ross Reid should keep his hat on.
Posted by Des Sullivan at Monday, August 12, 2013