The ceremony in Ottawa to officially welcome Mr. Justice Malcolm Rowe to the Supreme Court of Canada (SCC) was one of those pivotal moments in a country’s institutional evolution when unanimity prevailed that the right choice had been made and for the right reasons.

Justice Rowe was appointed by the Prime Minister after an exhaustive screening process headed by former Prime Minister Kim Campbell. It was the first time the process had been used to assess the suitability of potential jurists to the country’s highest court.

The vacancy occurred as a result of the retirement of Justice Thomas Cromwell of Nova Scotia. Many, and not just those within the legal community, felt that convention required that his replacement come from one of the Atlantic Provinces. Residents of this province naturally felt that, after 67 years in Confederation, it was time for a nomination from Newfoundland and Labrador. 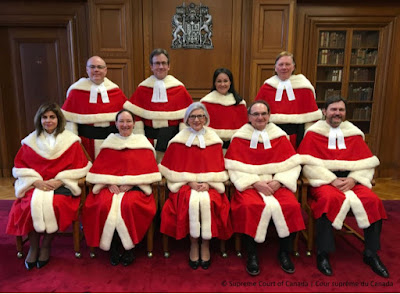 Underscoring its importance is the fact that the SCC is not just the final arbiter in matters judicial. It is a bastion of the Canadian constitution and plays a critical role in clarifying — and affirming — clear distinctions in the division of federal and provincial powers.

The Court settles politically tricky, even divisive, issues of public policy involving rights given protection under the Charter of Rights — important matters all — to which the federal government and Parliament often can’t quite muster the courage or (stated with less sanguinity) the broad support to resolve.

In this context, the SCC is an institution in which people in every part of the country, large and small, want to feel that they are not just observers, but that their perspectives and their values influence the creation of laws having an important policy component.

While conventions have their place — including the convention requiring regional representation — the Court earns unfettered respect internationally, as well as in Canada. That is because appointments are awarded on the basis of legal scholarship and an earnest regard for our cultural diversity and for the rights of aboriginal peoples, in addition to their intellectual strength and independence. And not to be diminished is a candidate's ability to reflect the linguistic duality of the country. 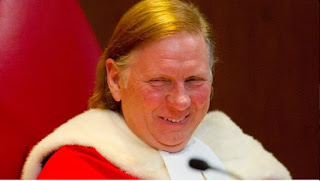 Justice Rowe had faced a very high bar; it seems the crimson robe had fit him perfectly.

Not surprisingly, the SCC Ceremony was a “high-toned” occasion attended by, among other notables, senior Judges and members of the legal community from this province, Justice Rowe’s family, and friends — this blogger falling into the latter category.

Our Justice Minister’s eloquence and humour was duly noted — including the comment that, as a young lawyer, he had always hoped for the opportunity to appear before the Supreme Court of Canada, implying he had not expected it to occur so quickly.

As one would expect, the speeches contained an effusion of praise for Justice Rowe, but also a recognition of his family’s rural roots and especially of his parents — both emblematic of a time in this society when the decision to forgo late schooling was essential to a family’s survival even if it was a life-altering choice. 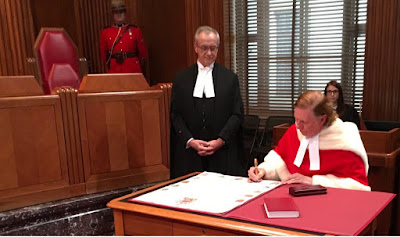 But, mostly, the speeches recognized that the Selection Committee had found in the accomplished Justice an uncommon intellectual, whose passion for public policy and the law is underpinned by a capacity for clear analysis and the courage to articulate and to defend the opinions he shares.

They noted his long career as a public servant — in the Canadian Foreign Service, as an advisor to the Federal Government on the law of the sea, as a Clerk of the Executive Council in this province, and of his years on the Bench as both a Trial Judge and a Judge on the Court of Appeals.

Several speakers noted his mentorship role with Action Canada, an agency designed to enhance the leadership skills of a select group of Canada’s best and brightest, and develop in them a broad understanding of public policy issues and choices.

A common theme was that the Supreme Court — and thus Canada — had claimed one of the country’s finest legal minds.

As I listened to the well-earned praise of those who had assessed Justice Rowe’s distinguished career, especially his remarkable contribution to Canadian jurisprudence and to the public policy arena, I had two quite distinctly different thoughts.

The first was that his enormous personal achievement is also shared by Newfoundlanders and Labradorians. A crowd on the periphery, far too often we think of ourselves as being on the outside of Confederation looking in. Judge Rowe’s appointment serves as a reminder that we suffer more from self-doubt than due to any deficit of power, ingenuity, or talent.

The second thought was far more prescient. Images came to mind of the many times we had hiked the East Coast Trail, and kayaked the bays along the Southern Shore, White Bay, Fogo Island, across St. Mary’s Bay, and others. I had relied upon his superior skill set and diligence for preparation. For some reason, I realized I had not actually congratulated him on his appointment. I merely said: ‘I guess I've lost a paddling partner.’ I shall fix that omission right now.