Puerto Rico Financial Control Board
Puerto Rico is a US Territory which has for decades been autonomous. It is not a state. But it has had sufficient independence to build up a debt of $70 billion. Its population is just under 3.7 million and has been declining. This amounts to a debt of US $18,919 per capita or $24,935, in Canadian dollars. RBC's financial projections place the per capita debt of Newfoundland and Labrador at $27,542 by the end of the current fiscal year, or 10% higher than that of Puerto Rico.

Without federal intervention Puerto Rico faced default on its debt, which would have made further borrowing impossible. The US Senate on June 30, 2016 passed the “Puerto Rico Oversight, Management and Economic Stability Act” (“PROMESA”) and it was signed into law by President Obama. The Act enables the government of Puerto Rico to restructure its debt and to regain access to capital markets. 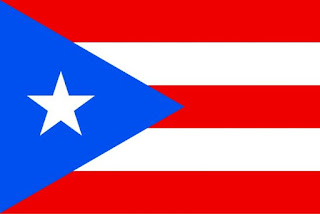 The Board will have broad powers to control the financial and legislative activities of the Government of Puerto Rico, which will continue to function. See the attached article from the Harvard Law School Forum on Corporate Governance and Financial Regulation for more information.

This bears some similarity to what happened in 1934 when the UK appointed a Commission of Government to replace the elected government of the self-governing Dominion of Newfoundland. The debt of the Dominion had grown to the point where 60% of revenues were going to pay interest on the public debt. While the burden of servicing the debt had been growing,  revenues were declining as a result of the deepening Great Depression and the collapse in the world price for salt fish, our staple export.

The government of the day voluntarily surrendered sovereignty to a non-elected government. On February 16, 1934 six non-elected commissioners were sworn into office. The Commission consisted of seven persons (including the Governor) appointed by the British government. Three commissioners from Britain were assigned responsibility for the three most important departments while three commissioners from Newfoundland were appointed to the other three departments. The Governor chaired the Commission, which governed the country, without a legislature and without elections, for 15 years.

How Long Can we continue to borrow at the current level?
Our province is borrowing more than $3 billion a year. How long can this continue? For three to five years? Or just a matter of months? The Auditor General recently gave a public presentation, from which the following chart is copied. It compares the current account deficit for all provinces as a percentage of Gross Domestic Product. Our deficit, compared with the deficits of all other provinces, is 13 times as high!

This does not include our huge capital account deficit, inflated by the borrowing needed to inject provincial “equity” into Muskrat Falls. Nor does it include the federally guaranteed borrowing by Nalcor! It shows a deficit of over seven percent of GDP. If capital borrowing were included it would exceed ten percent.  The gradual reduction  of  the deficit, as shown in the chart, depends upon  the willingness to make deep spending cuts and upon decisions that have yet to be taken. Without such decisions the deficit could continue and perhaps balloon even higher. Is there a political will to make these draconian cuts? Where is all of this leading us? Is there any hope for us? 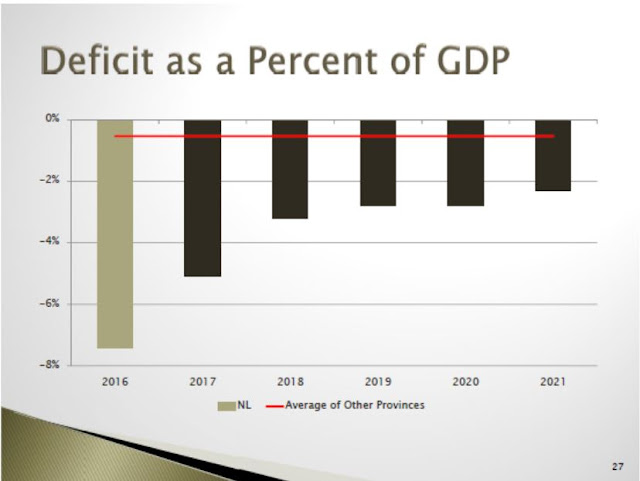 Looking to the hills for outside help to avoid the Apocalypse
“I will look to the hills from whence cometh my help” (Psalm 121:1). Will there be help? Will it come from rising oil prices or reinstatement of equalization payments? Or will it come from the negotiation of an omnibus deal with Quebec?

Government is dealing with the following three wild cards, a veritable Unholy Trinity:1) the price of oil, 2) the return of equalization payments and/or 3) a New Deal with Quebec. I will take each in turn.

1)               The price of oil will be kept in check by shale wells that will return to production when Brent hits $60 US. Reactivation of these wells will invoke the law of supply and demand. With increased supply the price will fall or hit a ceiling. There is limited potential for royalty revenues to rise and to rescue us from our overspending.

2)               Our fiscal capacity exceeds the national average so return of equalization payments is unlikely in the next five years. A new equalization formula will be implemented in 2019 but it is improbable that it will pay equalization to a province which continues to enjoy relatively high revenues, due in part to our oil revenues, albeit reduced.

3)               A New Deal with Quebec: Is Gull attractive to Quebec? I do not know. The cost estimates for Gull are outdated and neither Ontario nor Quebec is short of power. My hope is that we can do a narrow commercial transaction with Hydro Quebec, one which supplies us with a small amount of power (250-300MW tops), at Hydro Quebec’s opportunity cost. In other words we pay them slightly more than they can obtain in other markets in order to obtain power to meet our commitments and to supply provincial load growth, if it materializes.

If instead we are going to enter into another grand imperial set of negotiations embracing Churchill Falls, Gull Island and Muskrat Falls then we will be negotiating from a position of weakness and Ottawa is unlikely to be an ally. We should first attempt to do a simple commercial deal with Quebec before engaging in high level negotiations which will open up all past wounds and grievances. If we cannot first consummate a small commercial agreement with HQ for the purchase of power from Churchill Falls then the prospect of some kind of Grand Alliance, perhaps encompassing both hydroelectric development and transportation, would seem remote. Certainly we should not agree to set aside the Court Cases as a pre-condition to a commercial purchase of power for Muskrat Falls.

Federal Control Board
What will happen if none of these three “solutions” materializes and if we do not put our fiscal house in order? The inevitable answer is bankruptcy and the loss of our ability to borrow, or else some form of Commission of Government, following the model of the Dominion of Newfoundland in 1934 or the similarly draconian model of Puerto Rico in 2016.

Is the loss of our sovereignty a real threat to the province of Newfoundland and Labrador? Will the federal government appoint a control board similar to what the US government did for Puerto Rico, and which bears a chilling resemblance to Commission of Government, which ruled from 1934 to 1949? If the federal government intervenes then to what extent will they insist upon the deep spending cuts which provincial legislators were unwilling to make? Our own past experience and that of Puerto Rico suggest that if we cannot take charge of our financial destiny on our own that we will face a bleak outlook for a protracted period of time. Better that we take the medicine ourselves than having it forced down our throats by a Federal Control Board!