A TALE OF JETHRO BODINE IN THE PREMIER'S CHAIR

If you read last Saturday’s Telegram containing the James McLeod story “Ball falls, gets back up” you might be left with the impression we shouldn't worry about the province’s fiscal problems. How Ball actually "gets back up" is unclear. But equally doubtful is Ball's description of how he plans to get the budget back to balance: The Telegram paraphrases the Premier:

“The government has already hiked taxes basically as high as possible in the spring budget, so over the coming years it will need to cut roughly $100 million per year to get back to balance by 2022.”

Hold it there! The budget update confirmed a deficit this year of $1.58 billion. That is just the deficit on current account – or as some refer to it the grocery money.

Even Jethro Bodine - the dimwitted nephew of Jed Clampett’s 1960s ‘The Beverly Hillbillies’ TV series - wouldn't need help with this problem. It is obvious that at the rate of a $100 million annually it will take “roughly” 16 years, possibly out to 2033, to “get back to budget balance” and then only with respect to the current account.

No one even talks about the Capital Account and this year, alone, the province will borrow nearly $1.7 billion for capital purposes including for Muskrat Falls - as if it doesn't matter how the government is loading up the "total debt" problem. It doesn't talk about it. And almost no one asks about it.

Of course, while a relaxed and unconcerned Premier is engaged in high level financial repartee with an ink slinger, the Auditor General (A-G)  is on the rubber chicken circuit calling attention to our unsustainable fiscal problems.

Unfortunately, the A-G is timid - distinguishing, as he does, between “total debt” and “net debt” when - even if limited by the arcane rules of the Financial Administration Act and his profession - he should be shouting that there is little bloody difference. You won't find the bond markets make such a fine point!

And the “net debt” does not include the debt raised for crown corporations, agencies, and municipalities.

The net debt is reduced by the "equity" in those crown corporations, mostly the amount attributable to Nalcor - which, in a private sector entity, would be substantially written off for all the reasons we know. Those figures - because they are large and unsupportable by a sound investment thesis i.e. Muskrat  - need to be exposed rather than obscured.

At the rate we are racking up all forms of debt obligations, the public should expect those figures to grow. According to the Frazer Institute, a think-tank, the "total debt" figure will reach $22.9 billion by 2020/21.

Those numbers confirm we are a long way from budget balance.

It is one thing for Premier Ball to play Jethro and to get his “gazintas” wrong, but he also forgets that the interest on the "total debt" threatens to outstrip his proposed savings. Ball’s approach is a treadmill – which will leave the province in a far worse position than he suggests..

Let’s put it a different way – if "investments" like roads, bridges, schools, etc. do not generate revenues, from what source is the capital and the interest thereon to be paid?

It is not difficult to see - and the Premier should acknowledge the fact  - the term "net debt" is simply a fiction.

In addition, the A-G commits a fatal flaw in accepting that the government's commitment to balancing the budget is a starting point for his own warnings about the debt. It is hard to understand why he would make that choice especially since he has been witness to fiscal plans by successive tory finance ministers - each one having seriously missed stated fiscal targets.

Still, the A-G should be commended for his effort's even if he is far less raspy than the occasion deserves. His exhibits show a disturbing trend which magnifies our real fiscal circumstance.
They illustrate NL's precarious debt picture - one that cannot hide the accelerating effect of borrowing costs as a result of persistent increases in all forms of debt - "net" and otherwise. It is just  too bad the exhibits don't include a depiction of the "total" debt forecast.

Still they are instructive. 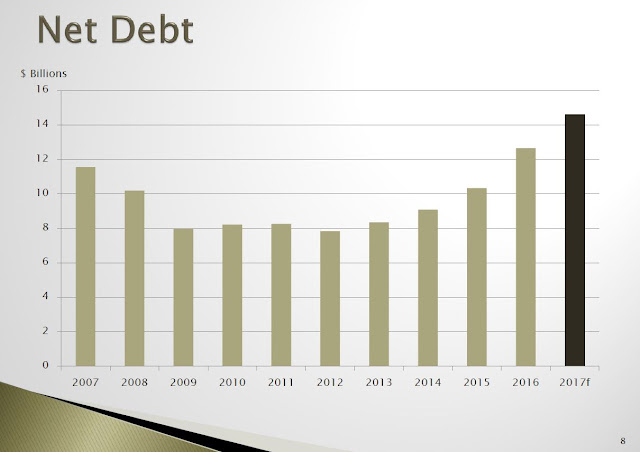 The government plans to roughly maintain "Program Epenses" at current levels notwithstanding inflation. 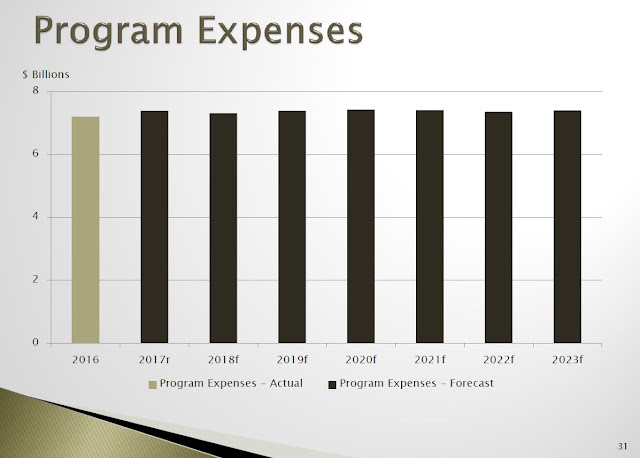 Note "Debt Expenses" (mostly interest costs) continue to climb each year to 2023 - though the government claims it is in control. 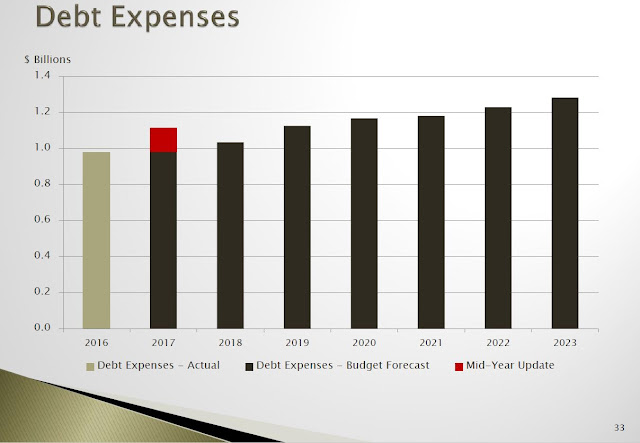 The "Net Debt" continues to rise until 2022 when Ball claims the achievement of budget balance. 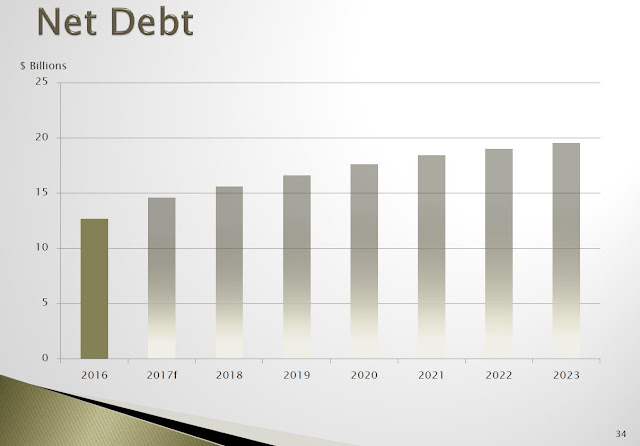 The Fall Supplemental Budget (noted below) is forgotten in the wake of Ball's declining popularity. 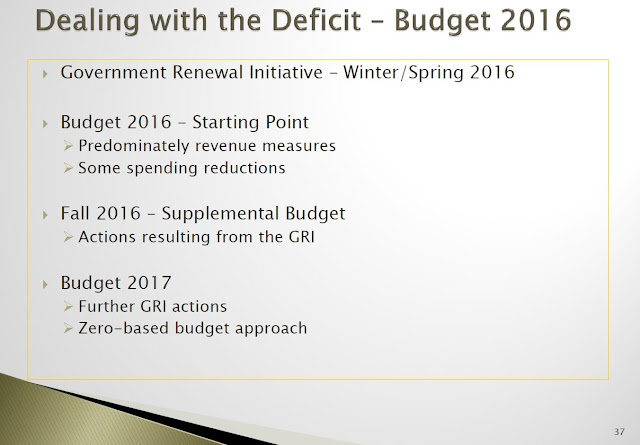 The next three Exhibits demnstrate how difficult it will be to achieve budget balance - as proposed - given the forecast financial climate. When the government makes an inadequate beginning - not having had the courage to wield the fiscal ax - the challenge just get larger every year. Declines in capital investment, employment, including the job engine - housing starts - will impact government revenues as the next three exhibits demonstrate. 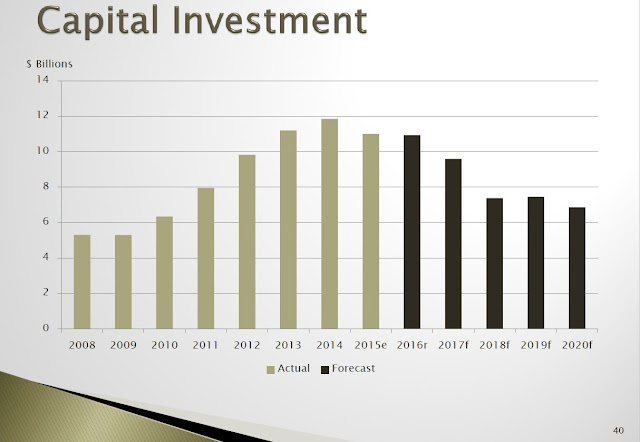 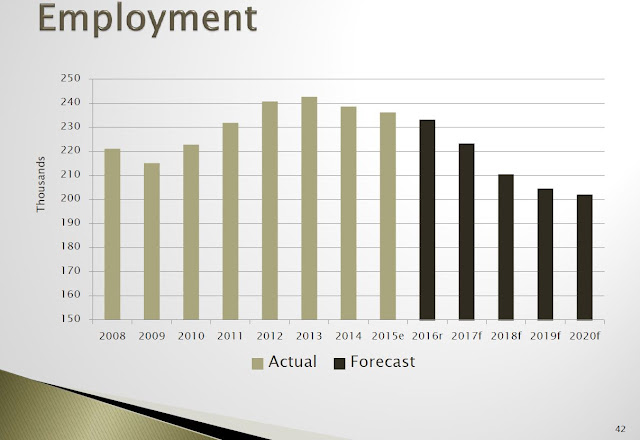 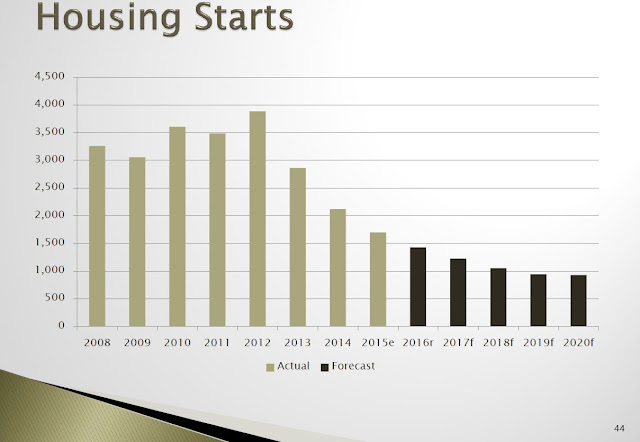 It is not clear if Ball's immigration target are reflected in forecast population decline. 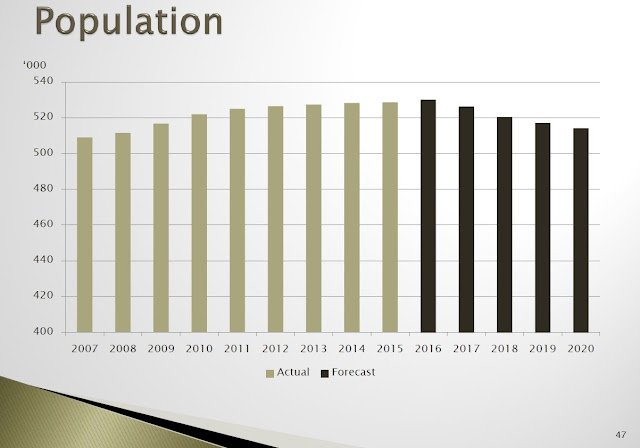 Then there is the problem of an aging demographic which speaks to a multitude of issues especially healthcare costs - which need to come down, not go up. 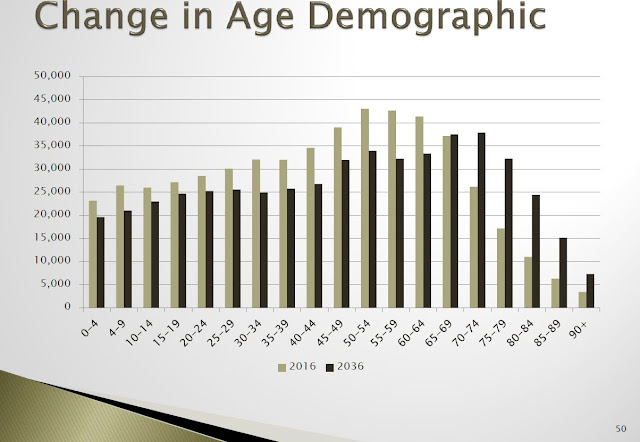 Based on evidence represened in the next Exhibit, health care costs are far more likely to climb. 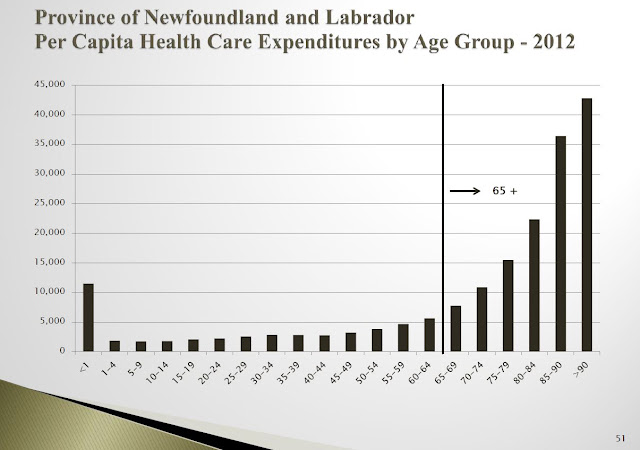 In summary, the Premier's assertion that he needs to cut "roughly $100 million annually" to get to budget balance by 2022 - having budgeted an operating deficit of $1.58 billion - is simply not doable. Ball ignores the seriousness of the total debt picture. He can't even acknowledge the $1.7 billion budgeted for capital account, including for Nalcor or the inexorable rise in debt service costs that seriously diminish his own tepid efforts.

This is the record of a Premier luring the province into a false sense of security. He not only gives the impression he is on top of the deficit, he would have the public think that our enormous debt problem can be resolved without massive cuts and a restructuring of government.

This Premier has nothing to celebrate after one year in office. I'm afraid the that the public has even less.
Posted by Des Sullivan at Thursday, December 01, 2016