FISCAL CRISIS BIGGER THAN ACCOUNTED FOR IN EMPLOYERS' COUNCIL PLAN

“Another Way Forward” is a policy document recently released by the NL Employers’ Council. It is a response by the province’s largest business organization to our desperate fiscal crisis. It purports to contain suggestions for a “better way forward” than the one released last year by the Ball Administration.


High on the agenda of the Employers’ Council is a reduction in taxation on both business and individuals, cuts to government programs and services, and a reduction in public sector employment by attrition.
The NLEC concludes that “government could remove more than a billion dollars in spending and we would still have:
1.       the largest spending per capita


3.      the highest spending on health and education of any province in Atlantic Canada.”


Giving further definition to those conclusions, the NLEC document cites statistics from the Conference Board of Canada which makes several assertions. Here are some:


1.       Government could reduce spending by $1.1 billion and we would still be the most expensive government in Atlantic Canada.


3.      Government spends more on sick leave than on road construction.


The NLEC proposes that the Government reduce overall spending by $1.1 billion by 2022.


On balance, I would judge the NLEC Plan thoughtful and well-intentioned; a good beginning. Indeed, notwithstanding our high-spending ways, the average person might see the NLEC Plan as a fairly draconian recipe for expenditure reduction.


Draconian as it may seem, however, I suggest that the Plan nonetheless avoids a full discussion of the depth of the crisis and, hence, offers only an incomplete remedy. The issue is important because some, including this Blogger, believe that the provincial debt has already reached the tipping point of what is manageable.


Presumably, the NLEC believes that ALL of the money borrowed to finance our debt — including the shortfall in funding to keep the Muskrat Falls project solvent — must be repaid from general revenues.


If the business group expects “rate mitigation” or a major write-off of the asset to be funded via an asset sale (i.e. NL Hydro, offshore oil related royalties, shares in CFLco), then the Plan is completely silent on the question.


The omission of “rate mitigation” — estimated to cost between $400 and $500 million, depending on whether you accept the Government’s or PlanetNL’s figure (which, by the way, is supposed to accompany 17 cent per kWh power and its associated impacts) — puts a big question mark on the whole NLEC effort.


Spared from the Plan but invoked by the Council’s Executive Director, Richard Alexander, in the Q&A session with the media was the word “bankruptcy”, confirming that that level of concern is actually uttered in some business boardrooms, even if softly.


This Blog has rarely been complimentary to the business community, their behaviour around Muskrat being akin to mindless ‘boosterism’; the group as a whole seemingly oblivious to the harm inherent in bad public policy. In contrast to the St. John’s Board of Trade, the NLEC is far more expressive of what thoughtful, constructive, skilful and rational people can contribute.


The NLEC is fortunate to be headed by Executive Director Richard Alexander, whose public policy skills would have been pilfered by a smarter government long ago.


The NLEC, as an organization, represents the largest — and some of the most profitable — corporations in the province. It is true that they have been sounding alarm bells on the fiscal front for some years. But they also possessed the intellectual and financial capacity (especially Fortis Inc. and NL Power) to expose the risks of the Muskrat Falls project… and they didn’t, knowing nevertheless that the Williams/Dunderdale Administrations were taking us into an abyss.


And while we are clearing the decks for a larger conversation, it is important to note that any plan of austerity hurts not just those on the left of the ideological spectrum with whom the business community is typically perceived at odds, but it hurts those on the right and in the centre, too.


To its credit, the NLEC went outside the province to employ the economic analysis of the Canadian public policy group, “The Conference Board of Canada”. Corporate Research Associates also conducted interesting opinion research on the fallout from high taxation  — though, to be frank, I found the questions to be leading and therefore to artificially bolster the NLEC’s quest for lower taxes.  The full text of “Another Way Forward” is found at this Link.


The NLEC proffers the view that, while the current government did not create the fiscal problem, its ‘tax and spend’ approach is not just counterproductive but will inspire both companies and individuals to leave the province.


The public opinion surveys attempted to give expression to how many people reacted poorly to the Ball government’s tax plan, and to that extent they have value. 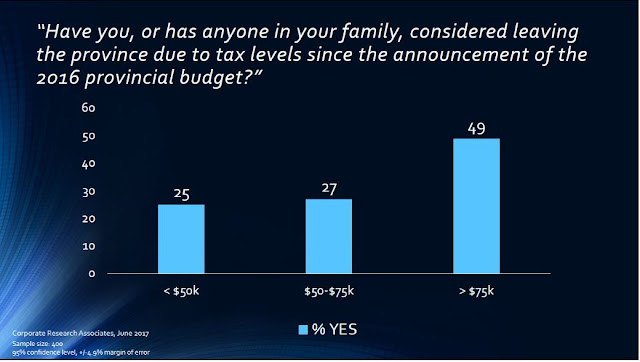 When the results of the question contained in the Exhibit (above) are dissected based on age demographics, not surprisingly the younger folk — the earners — indicate the greatest propensity to leave the province.


The NLEC counsels a reduction in personal income tax, the deficit reduction levy and the gas tax. There is a self-interest component, too. It wants a reduction in corporate income tax and the payroll tax. The hit to government from those tax reductions is estimated at $322 million which the group proposes would be implemented by the third year of a four-year strategy.


Taxation, and especially the payroll tax, has long been the NLEC’s bugaboo.  While no one likes taxes, especially when they are a comparatively higher than in most other jurisdictions, they are hardly a new experience in this province.


Indeed, notwithstanding poll results that indicate that people and businesses may vote with their feet, I find that the emphasis on taxation constitutes a weakness in the NLEC’s alternative plan and undercuts the urgency of the fiscal crisis — something no one should toy with at this late date.


To phrase the point differently, as at the outset: if all that we owe must be repaid, tax cuts on the scale NLEC that proposes will not be possible — certainly not without a major asset sale and possibly not even then, given the uncertainty of the market value of some of those assets — and the public should be ready to fight any such attempt anyway.


Lower taxes constitute the mother of all “motherhood” issues. Every group claims that they are essential to attract business and investment. But no group — including NLEC — has shown which businesses, prior to Cathy Bennett’s 2016-17 tax package, were attracted to this province over the past decade, except by the feeding frenzy of a megaproject environment.


Equally, this resource-based economy is expected to behave exactly like those far more diversified. The implication is that their success is due to a low-tax strategy, an argument having dubious underpinnings.


Truly, can NL be compared with the far more diversified economy of Ireland when demographic and geographic factors are considered? Admittedly, the case is hard to prove, but it is incumbent on the NLEC to show that cuts in spending — in order to facilitate tax reductions — will not chew away at the “bone” of NL society as opposed to just the “fat” of the bureaucracy and whatever government touches.


That said, additional Exhibits featured in the presentation offer testimony to the pervasiveness of our fiscal condition — especially the lack of spending discipline. The next six Exhibits from the NLEC document tell their own convincing story: 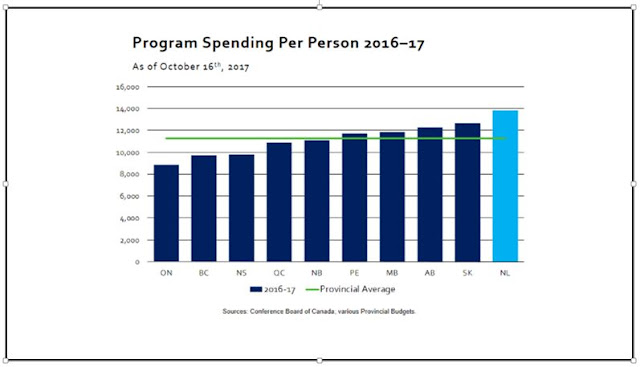 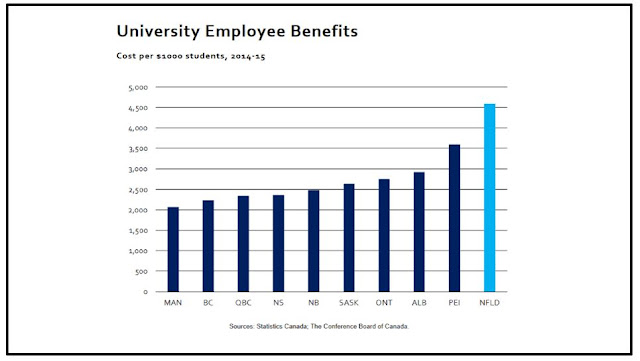 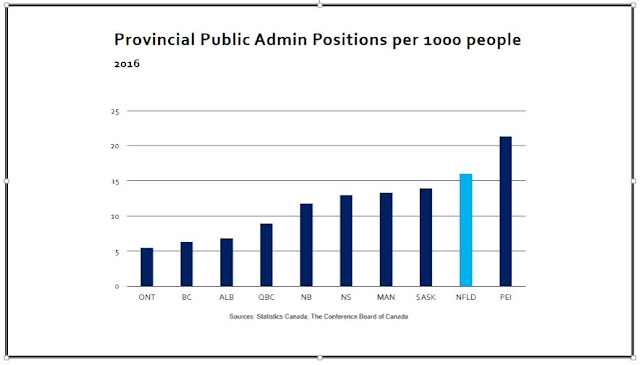 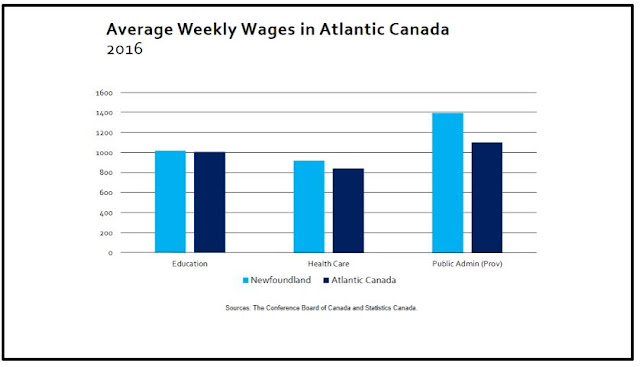 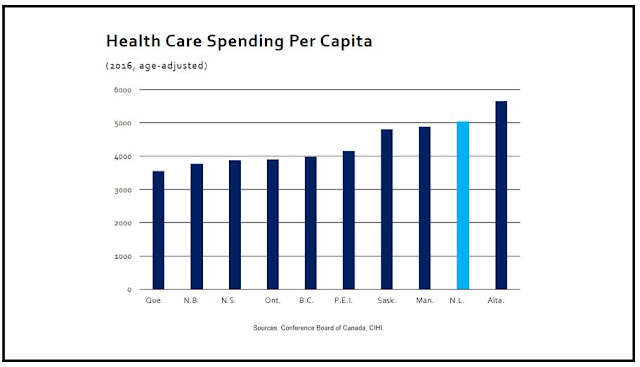 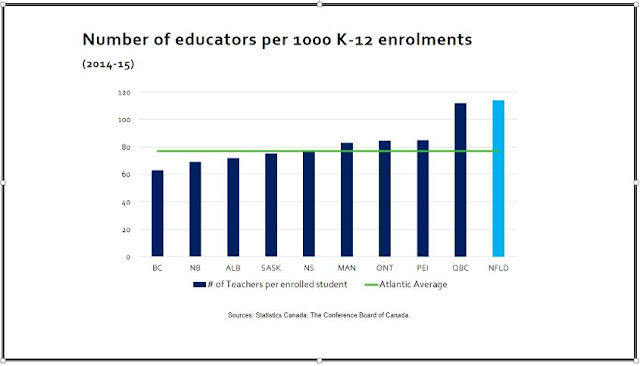 The Exhibits reveal an economy which has been completely distorted by a megaproject environment overlain by a decade of unbridled government spending, low interest rates, a lack of political leadership and the expectation that OPEC, not local restraint or common sense, will continue to finance (as JM characterized them) our ‘drunken sailors’.


The NLEC’s “VISION” — as the Plan is billed — seeks changes that will “make Newfoundland & Labrador the most attractive place to live, work and do business in Atlantic Canada.”


That would seem wonderful if NL had time on its side. But successive governments and Muskrat Falls have run down the clock on our ability to keep on borrowing.


Apart from the cost of “rate mitigation”, the NLEC makes no reference to the amount borrowed annually for capital account - borrowing for which is "rolled over" without regard for the lifespan of the assets financed.
It also does not make clear if its numbers reflect several years of forecast reduction in GDP. It notes the Government’s reliance on high prices for oil, but it makes no accommodation should those prices reverse their modest upward trend. It acknowledges that debt servicing exceeds what we spend on education but it fails to show how, in a low inflation environment, we can pay down the debt in order to get those interest costs down.


The NLEC may have been attempting — like the government — not to shock a tender public; that by giving emphasis to a combined plan of tax reductions and cuts to public sector jobs they would have a better chance of gaining public support for their ‘less spending, less taxation’ initiative.


There are some who might agree with that approach. But when do we explain to the public the dire state of our fiscal crisis?


Besides, there is no other group in the province that has made such a serious attempt to address the issue as has “Another Way Forward”: not Memorial University, not NAPE or CUPE — the latter awaiting more ‘unsustainable’ wage improvements from a government lacking the spine to say “no”.


Newfoundland and Labrador has just witnessed a decade in which governance has run the gamut from looney to corrupt. The public deserves to be told of the predicament, else there will be no urgency for change.


“Another Way Forward” contains the “start” of a credible path and evidence of one organization’s capacity to tell truth to power.

How can the Plan be improved?

One hint: the NL Employers' Council - as do others - needs to address the culpability of the Federal Government in the creation of the Muskrat Falls mess. Ultimately responsible are Williams, Dunderdale and senior executives of Nalcor. But only those who have stayed tuned out from the beginning will deny a federal role in the debacle.
Posted by Des Sullivan at Monday, November 27, 2017