The release of the Grant Thornton report on Friday raised serious doubts about Nalcor’s pre-sanction justification for the Muskrat Falls project.  The report indicated enough areas where weakly constructed assumptions would add up to show that the Muskrat Interconnected option would not be the least cost alternative compared to the remaining Isolated Island option.


Despite these very persuasive snapshots, the Inquiry may only have gotten just what it asked in terms of the forensic audit’s time and budget limitations from a team with little experience in electricity utilities.  The story is not yet complete enough and the Commission should pursue reconstruction of Nalcor’s cost models using an extensive revised set of assumptions developed by an experienced utility consultant.  It’s a significant undertaking but one that appears essential to allow the Commissioner to concisely explain the project’s economic fallacy.
……


The most complete publicly open analysis put forward by Nalcor was their November 2011 submission to the PUB following their so-called Decision Gate 2 stage.  Nalcor’s DG2 estimate used the Cumulative Present Worth technique to roll up the two alternative projects under review and declared the Interconnected option (Muskrat) was better by $2.16 Billion.  While a DG3 revision was issued in 2012, DG2 represents a better baseline for comparison as most of Nalcor’s decision making was already complete at that stage. 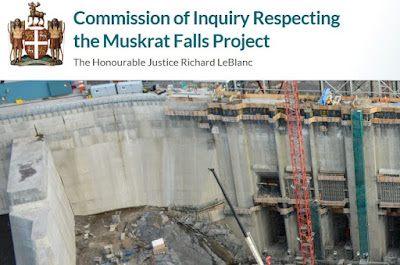 Already, as Uncle Gnarley summarized in the September 21 post, that $2B gap is likely non-existent.  We won’t repeat those findings here but we will raise the concern that if more issues were tackled by the auditors and the Commission, the CPW analysis would likely swing substantially in the other direction in favour of remaining an Isolated Island.


The Grant Thornton auditors have not fully defined all the issues and their impact on the CPW analysis nor do their findings to date seem to add up to the known actual overrun.  Perhaps the remainder of cost overrun they intend to show was a collection of execution errors in post-sanction engineering, construction and project management.


This post puts forward an alternative framework to find several areas of major concern in the CPW analysis and asserts that the overruns were primarily pre-sanction estimating errors.  This post relies on high level industry benchmarks and analysis to show that not only was Nalcor’s CPW estimate drastically wrong, including benchmarks that align with the project’s updated cost projection.
Capital Cost Error – Labrador Island Link
A detailed report from the Western Electric Coordinating Council, an alliance of utilities operating throughout 14 US-western states plus Alberta and British Columbia, details the costs of AC and DC transmission lines and DC converter stations.  While dated 2014, it is assumed similar earlier reports were available in the industry that could demonstrate consistency in costs.


Source: https://www.wecc.biz/Reliability/2014_TEPPC_Transmission_CapCost_Report_B+V.pdf
The report indicates base unit cost for flat land construction of $1.56M/mi for high voltage DC transmission.  A range of multipliers are provided for different terrain: “forested” is the highest at 2.25 which may be the best factor for the LIL conditions.  DC substations are estimated at $490M each.


For the 1100km (688mi) Labrador Island Link with two DC substations, using the forested factor for transmission line construction, the base budget should be [688 x 2.25 x 1.56] + [2 x 490] = $3.4B.  Perhaps 2010 cost estimates may have been a little less, however, the estimate here excludes adders for the Strait of Belle Isle subsea crossing and the synchronous condensers at Soldier’s Pond and Holyrood, plus cost escalation for multiyear construction.  This is also a $USD estimate, however, in 2010 at DG2 the dollar was at par, therefore some exchange rate risk could be added.


Nalcor presently advises the expected cost to complete the LIL, excluding finance charges, is $3.7B.  The WECC-based estimate turns out to be essentially right on the money.   It is interesting that no Labrador cost increase factoring is required in this instance, perhaps as many key materials could be competitively sourced from outside and also because the methodology of the contractors involved came largely from the WECC region.


What is at issue is that Nalcor budgeted the LIL scope at DG2, as presented before the PUB in late 2011, at just $2.06B (excluding finance charges).  Surely better information was available and the lowball estimate cannot be justified.  The Nalcor DG2 estimate for the LIL should easily have been about $1.5B higher.


The WECC has another report featuring the table below summarizing hydro generating station costs at $3200/kW (note the EIA figure is specifically for 500MW+ plants). Although it is a 2014 report, this figure is consistent with additional reports not cited for the period around 2010. 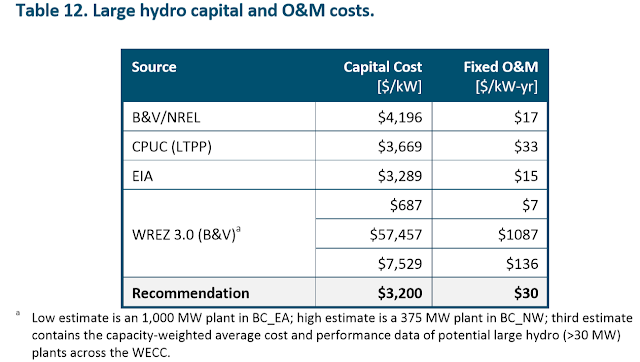 
In this instance we cannot ignore that Labrador carries a high premium for on site construction costs.  Knowing the circumstances of the other megaprojects in the province, including the highly relevant IOC expansion started in 2008, large scale in-place construction work – ie. you can’t buy a dam and truck it in – are typically more than double.  The components and modules that could be bought from outside the region don’t need factoring.  A minimum average factoring of 1.5 would be entirely appropriate with 15% contingency besides if only for exchange rate risk and multiyear cost escalation.
Had the generating station been budgeted at [3200 x 1.5 x 1.15] = $5520/kW, multiplied by the 824MW capacity, the anticipated cost would be $4.5B before adding finance charges.
To this we must add the Labrador Transmission Asset, a 315KV AC transmission line connected to Churchill Falls 250km (156mi) away.  The WECC guide used in the LIL analysis above indicates flat land construction cost of $2.08M/mi.  Using the forested factor again, the LTA could be predicted to cost [156 x 2.25 x 2.08] = $0.73B before financing charges are added.  A massive new transformer substation at Churchill Falls was also part of the LTA scope that is likely costing well in excess of $100M (more precise data could not be found in the time available to prepare this post).
Today we find that Nalcor is budgeting final construction cost for the generating station to be $5.5B and the LTA $0.9B.  The cost estimates above derived from WECC benchmarks is no less than $5.3B.  Again, these quick real-world estimate assumptions would have been very accurate.
At DG2 in November 2011, Nalcor carried $2.87B for the Muskrat generating station including the cost of the LTA. Not only did they not price in local construction premiums but they went considerably under WECC numbers.  Remove the LTA cost, Nalcor may have priced the generating station at under $2500/MW, less than half what they should have carried.  Nalcor’s DG2 estimate for these assets should have easily been $2.5B higher.


Annual Operation and Maintenance Error
In June 2017, Nalcor CEO Stan Marshall updated the project O&M assumption from $34M per year to $109M.  The WECC generating cost table above included a recommended O&M allowance of $30/kW-yr.  This excludes all transmission asset O&M which must be estimated separately.  Given Muskrat’s 824MW rating, the expected cost is $25M/yr.  At DG2, Nalcor presented to the PUB an O&M estimate of $13M for Muskrat generation and $14M for transmission.


Nalcor likewise should’ve known plenty about its own transmission assets to not expect these expansive assets to cost only $14M/yr.  There was never a basis for setting O&M at $27M/yr at DG2 (or $34M/yr at DG3).   The tripling of O&M costs applied over the 50-year term of the CPW analysis was not calculated by Grant Thornton but likely would have increased the CPW of the Muskrat option by $1B.


Overinflated Load Forecast – Impact on Isolated Option Assumptions
Last year, Stan Marshall also released the second downward revision of the Nalcor load forecast, dramatically pared down from what Nalcor presented at DG2.  This is critical to the Isolated Island CPW calculation as Nalcor used the huge load growth to justify burdening the Isolated Island Scenario with a costly series of new generation plants above and beyond Holyrood refurbishment.  They chose mostly fuel-fired thermal plants which allowed the additional error of excessively high oil price forecasts to be applied.


Unravelling this aspect is not easily done without engaging in a complete re-run of the modelling performed by Nalcor.  It is guesstimated, based on DG2 sensitivity analysis figures, that the latest Nalcor forecast would drastically reduce new plant builds and improve the CPW of the Isolated option by up to $1B.
In addition, fuel cost was the majority of Nalcor’s CPW estimate for the Isolated scenario at just over $6B, most of which was needed to satisfy the false load forecast increases.  Adjusting for the huge reduction in fuel quantities required and relaxing the inflated pricing even a little might well lower the Isolated CPW by $3B.


There are additional issues that time and space are not available to fully address in this post such as Nalcor’s refusal to include effective Conservation and Demand Management, to allow for higher levels of wind energy penetration, to effectively recognize elasticity behaviour and to foresee additional evolutionary steps in technology that would yield further load reductions, even lower than Nalcor’s latest forecast revision.


Revising the Cumulative Present Worth Projections
Just the few easy to find items quantified above make a massive change to the DG2 CPW numbers presented by Nalcor.  The summary table below shows that the revised CPW analysis would favour the Isolated Island option by nearly $7B.  Muskrat would not only have failed a more accurate DG2 analysis, but it surely would have been eliminated at the preliminary DG1 screening stage in favour of other less evaluated alternatives.

The items Grant Thornton reported on only amounted to roughly $2B in total adjustment bringing the difference between the two options to roughly zero.   Besides not calculating the value of certain items, it appears their analysis does not sufficiently step outside the box of Nalcor-supplied information.  Relying solely on Nalcor’s pre-sanction documentation and the review opinion of Manitoba Hydro International, an organization afflicted with many of the same flaws as Nalcor, may not be able to sufficiently expose the poor decision making.
It may be necessary for the Commission of Inquiry to hire a professional energy industry specialist firm, like a Liberty Consulting, to take all the steps needed to thoroughly reconstruct pre-sanction cost estimates.  Then, only by fully remodelling the CPW analysis using reasonable and foreseeable costs will the first phase of the Inquiry have an opportunity to find the true magnitude of costing errors.