The decision by Equinor (formerly Statoil of Norway) and Husky Oil to further assess the feasibility of developing the Bay du Nord oil field, located some 500 km offshore in the Flemish Pass region, represents good news for the province. Unfortunately, the Ball Government turned what was a good news day on July 26, 2018 into one of disappointment and disbelief.
That the provincial government thinks it is solvent enough, knowledgeable enough, or savvy enough to deal with one of those major oil companies — with their mixed portfolio of huge capital assets — is a prolongation of the same pretense that facilitated the reckless decision to sanction the Muskrat Falls project.

Equinor, the lead player in the Bay du Nord development, and Husky plan to spend millions of dollars studying the field and looking at the best way to develop the structure. They will develop cost projections for both construction and operations. If the numbers are attractive enough, they plan on sanctioning the project within two years. Presumably, if the development costs and oil prices don’t align, it will be put on hold or cancelled altogether.
Bay du Nord is located in a remote deep-water field containing (based upon current estimates) in the range of 300 million barrels of oil — a number which many industry analysts consider a marginal reserve.


The Province’s stake comes at a cost of $89.4 million, representing 10% of the costs of exploration and other expenses to the end of 2017. The public will be responsible for the same share of planning and engineering costs on an on-going basis, which will run into the tens of millions. If, on further assessment, the project is cancelled for any of a host of reasons, those are sunk costs for the Province.
Ultimately, the go/no-go decision will be made by the two major oil companies having rights to the field.
NL’s fiscal position is precarious at best. We are buying into a high-risk gambit with 100% borrowed money.
That is the risk issue.
Another underscores why the Province cannot — should not — attempt to wear two hats.  The public might consider this question: what if Equinor and Husky decide that they need more concessions as a condition of proceeding with the project? Faced with such a choice, on what basis would the province not cave?


More and more questions arise. For example: Why does the Premier think he has the right to borrow money we don’t have? Why would we wait for a return that may never arrive unless literally every aspect of the project goes okay?
Where does our sense of invincibility come from, and on what basis is it justified? Why is it that an assessment of “risk” plays no role in our decision-making?
There is also the matter of jobs: the very issue on which every project built in NL hinges.
As the deal is currently structured, and assuming that the project does proceed, the scant opportunities available to tradespeople will consist of the most unsophisticated work on the project.
Since the construction of the Hibernia platform, Governments have negotiated the amount of work that the Owners must commit to the local workforce. The Ball Government’s press release suggests that 5000 tonnes of local fabrication will be performed here. The work seems to be associated with mooring/anchor systems and the construction of subsea systems. There is no mention that any module of the Floating Production System (FPSO) will be built in NL.
In the case of the Terra Nova and White Rose projects, the “topsides” work was huge. In both cases, the bare hulls came to NL for topside outfitting. 60% of the Terra Nova topsides were fabricated in NL; local fabrication on the SeaRose was over 90%. Installation of the topsides, outfitting and commissioning all took place in NL.
The documentation released so far suggests that the Bay du Nord FPSO will arrive complete, likely from Norway.


Premier Davis: Now is not the Right Time
The Government promises “4 million person hours in pre-development and development phases.” If the number had been converted to person minutes, it could have “appeared” even higher! But PR flourishes aside, the estimate is likely not even close to being correct.
Person years of work on these projects is measured by a formula representing the average per “tonne”. With the complex “topsides” constructed elsewhere, the remaining mix of work simply won’t warrant the same equation. In other words, the person years/hours of work on mooring/anchoring systems is far less per tonne than on topsides infrastructure.
What the Government is saying is likely untrue unless it fully describes the specific work to be performed and the international standard for person hours/days of work associated with each component.
Note that the Government’s press release states that the “fabrication of the hull, turret, flowlines, umbilicals, and other components will be international.” That leaves only the mooring/anchoring and subsea systems. Little wonder person years of work have been converted to “person hours”.
On this account, we have heard no opinion from the Building Trades Council. We have heard nothing from Marystown, the Shipyard Union, Peter Kiewit, Clarenville or the many, many other small yards and contractors from around the Island that, in the past, have benefited from oil-related projects.
_______________________________________________
Bay du Nord Framework Agreement (Technical Briefing July 2018
by Department Natural Resources)
________________________________________________
Perhaps they lack a leadership capable of recognizing when they have been left out of a major piece of work. Possibly, they are disabled by international affiliations or local politics and are unable to object when resource development does not reflect our capabilities, employment needs and human resource potential.
Whatever the case, as this deal stands, the higher-skilled work will go elsewhere: out of the province. With little fabrication work for NL, the 10% equity stake makes even less sense.
At minimum, the complete documentation on this deal must be released to the public. Nalcor Oil and Gas should also release a summary of the total equity investment made to date, the anticipated level of investment required prior to Decision Date and, based upon current knowledge, the anticipated rate of return from the investment. 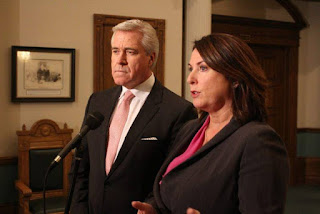 The public deserves to see the details of what inspired the Ball Administration to get mixed up in another high-risk, speculative venture in a Province that has only barely grasped the seriousness of the Muskrat Falls debacle.

Finally, it is worth noting that, prior to the arrival of Premier Danny Williams, the NL offshore worked very well without Nalcor Oil and Gas. We had a competent Natural Resources Department and the C-NLOPB was an effective administrator, managing lands, discovery applications, exploration licenses and benefits agreements, negotiated by the Province. The system worked well and the Province took no risks that would impair the public Treasury.
Williams’ idea of an energy warehouse fundamentally changed provincial policy, shifting risk onto the public. It seems that nothing has been learned, having permitted billions of dollars to be placed in the hands of inexperienced public servants and squandered.


The Province has no equity; it has to borrow and thereby risk capital funding on which those reliant on health and social services should be able to depend.

(Max) on the 70s TV Series, “Get Smart”.  Field reconnaissance missions were his
specialty, hiding in unlikely places such as mailboxes, lockers, trash cans, and fire
hydrants to pick up information.

Today’s contributor is a professional whose career includes myriad construction
industry projects including for the offshore. He has already written on the Uncle Gnarley
Blog.

The pseudonym Agent 13 reveals his humourous side. But on public policy
matters, as you might have discovered, he is deadly serious.