WHEN NL NEEDS A HEAVYWEIGHT THERE’S ONLY SEAMUS O’REGAN


Politics is not so comfortable an arena that politicians need only do soft-sell through photo ops and nice-sounding press releases.
Sometimes public policy issues are complicated, require intervention at a high political level and demand considerable analysis. Solutions to the big problems require political shrewdness, dexterity and good relationships at the Cabinet level.
If the politician, even having been appointed to Cabinet, doesn’t grow in the job and fails to learn how to get things done in that highly competitive business, likely he/she will have little to report at the next Poll. While many politicians prefer the soft-serve of social media platforms, the savvy ones — and survivors — will spend a good deal of time making political alliances and setting the stage for when they will need support on a make-or-break issue.
I get no sense that the Minister of State for Veterans’ Affairs, Seamus O’Regan, either understands those rules or has the heft to position himself for the long game.

A lot has changed since the days when at least one NL MP could be guaranteed a major portfolio. Usually one of the MPs elected was gifted with both intellect and moxie. Since Confederation, Pickersgill, Jamieson, Crosbie, Tobin and Foote could be counted on as heavyweights.
Federal Minister Seamus O’Regan and the other six federal MPs have escaped being hoisted on their petard even on issues like the Fisheries Minister’s confiscation of the surf clam quota or the arbitrary extension of the federal role in environmental assessments — which, according to one industry observer, will add an additional year onto the period required for environmental approval of the Bay du Nord oil field. 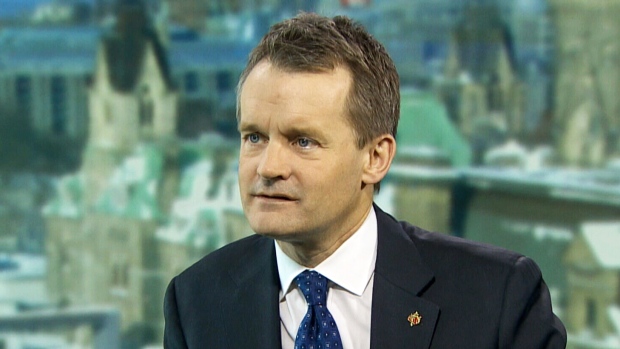 The current crop of MPs avoids major issues of public policy in favour of waves on Facebook. This won’t earn them stature, certainly not in the eyes of the Prime Minister.
Fact is, now that NL needs a “player” in Ottawa, the unready seven, including O’Regan, have been off the hook by a partisan Premier Ball for too long — at a cost to his own political image and to the larger issue of the Province’s sustainability.

Ball’s belated acknowledgment that the Feds will be asked to come to the table on the Muskrat Falls debt is instructive in the context of this Tweet from the Federal Minister: 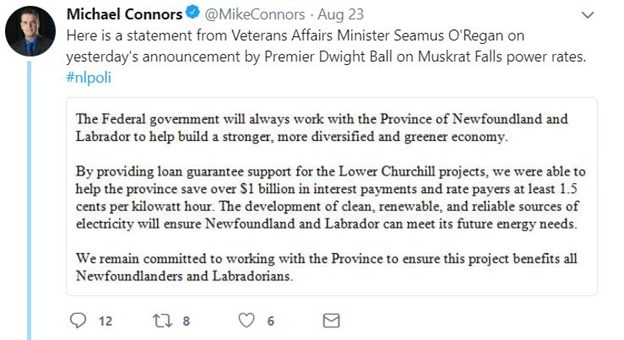 This has to be one of the lamest acknowledgments yet of a request for assistance from Ottawa. It implies that O’Regan has accepted advice that the Federal Loan Guarantee has saved us $1 billion, so why can’t we be quiet and happy, too?


The Province made a terrible decision to sanction the project, certainly; but only the unread and the most naïve would conclude that there is no other dimension to the issue and therefore Ottawa is off the hook.


Is that the most we can expect from our key man in Ottawa? Has he invested no time reviewing the file or thinking about the case for dragging the Federal Government into a discussion to which it has an obligation to be a party? Is this not the very job of “senior” politicians, unless Seamus is content to be counted among the pedestrian kind?


Of course, if the Federal Minister hasn’t done his homework, it is the job of the Ball Administration to help him out; even if it has to write the narrative for him. Even the Premier must know by now that Ottawa was negligent at the outset, allowed the $1 billion effect of the FLG to be wiped out by the Nova Scotia UARB in its demand for a Supplemental Energy Access Agreement, and that the Feds otherwise failed to give essential due diligence to the award of the Guarantee.


Just for Seamus’ edification, in Minister Peter McKay’s haste to secure for Nova Scotia the full benefit associated with the loan guarantee, Ottawa went so far as to approve the loan based upon DG2 or concept numbers, oblivious to the fact that there was no actual business case for the project. These are not new revelations.


Besides, can Ottawa provide any parallel file on which so much money was given over to the trust of people genuinely incapacitated by their own incompetence?


Worrisome, now, is that when O’Reagan should be exhibiting knowledge of the project and its dire consequences both for the public treasury and for ratepayers, he has Ottawa bureaucrats penning innocuous press releases and creating delay.


Following O’Regan’s interview with Paddy Daly on the August 29, 2018 edition of Open Line, VOCM summed up O’Regan’s comments to the Radio Host. It noted that the MP “is seeing a lot of anxiety among his constituents in his travels this summer. He says they’re open to doing what they can to help because the Liberals are the party of the middle class.”


It is reassuring that O’Regan is not oblivious to voter feedback, but what on earth does being a Party of the middle class have to do with Muskrat Falls or with him waltzing the Feds to the table with Ball and co?


This is a Minister unbriefed and unaware of his role as a Federal representative from NL.


And it is not a time for timid musings. This is an occasion for him to display his knowledge and political savvy, if he has any at all, and to give affirmation that he is engaged in the file. But O’Regan offers no such assurances. His press release even suggests that Muskrat is an issue for later.


It would be encouraging if one of the other MPs was working the corners, trying to compensate for this Minister’s delayed political maturity. But that is not happening. There was a time when Yvonne Jones had a voice, when the occasionally feisty MP Scott Simms was just that: feisty. But it seems that they don’t work big files.

And as to the others, I can’t even remember their names.
Posted by Des Sullivan at Monday, September 03, 2018