I am not quite sure who the new Leader of the PC Party, Ches Crosbie, is trying to impress with some of the positions taken in recent weeks.

While he shares the well-known Crosbie name, he is coming up short in proving that he is his father's son. Regardless of the side of the partisan divide upon which one sits, John Crosbie, Ches' father, could be counted on to be forthright and to say publicly — in the Halls of Parliament and in the provincial and federal Cabinets — exactly what was on his mind.

One example is often repeated in a CBC clip in which he is surrounded by a throng of frustrated fishers following the declaration of the Cod Moratorium. Crosbie the elder forthrightly answers one indignant protester: “I didn't take the goddamn fish out of the goddam ocean!”

It is possible that John's ill-advised support for the Muskrat Falls project, late in his public career, inspires Ches to pull his punches. Likely, however, given the Crosbie family's history of political pragmatism, this is not what causes the son to be an apologist for the PC leadership that gave us Muskrat and a huge public debt and structural deficit - added to by the Liberals during its most recent stint in power.

More likely, Ches finds that the Tory Caucus will abandon him if he chides those who supported the scheme for their recklessness, tells them that he intends to chart a different course, apologizes to the whole public on behalf of the Party, asks for forgiveness, prescribes fundamental change in public policy and the Party’s approach to governing if it is given another chance.

In the PC Party’s current state, does he really have another option? Besides, isn’t this time for real leadership — not a continuation of the style born of Danny Williams?
Does he really think that the public — as slavishly partisan as many seem to be — are ignorant of their circumstance and of who is at fault? Can he or his Party make headway without coming to terms with a debacle of its own creation? 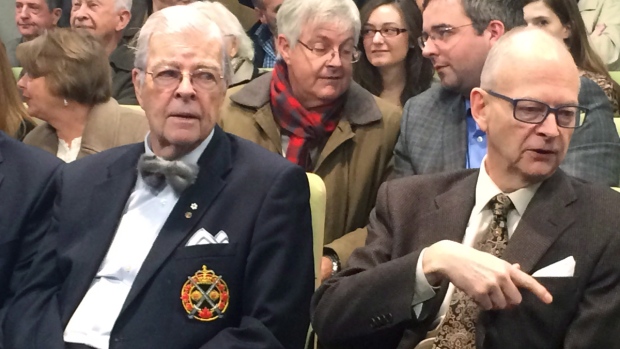 From Williams to Kathy Dunderdale to Tom Marshall to Paul Davis there was a progression of ineptitude on a such scale that any new and right-thinking Tory Leader — having assessed his inheritance and their legacy — would be expected to pick up a curt broom and clean house.

Instead, Ches has chosen to persist in their deceptive and failed tactics. He, too, is content to mislead and to misinform.

In two interviews with the Telegram, Crosbie has exhibited a deliberate unwillingness to have his Party take responsibility for Muskrat.

The neophyte Tory Leader recently asserted, following Ball’s comment that “the PCs had not allowed the PUB to do a full review of the Muskrat Falls project” that the pattern was begun by a previous Liberal government.

This is pure revisionism.

The Government of Brian Tobin chose to have the legislation for the purpose enacted when a deal with Hydro Quebec on Gull Island looked promising, the power from which was solely for the export market. Local ratepayers not being involved, there was no role for the PUB.
Not finished, Crosbie weighed in on the Dunderdale Government’s decision to tear from the PUB the “ring-fenced” or limited reference it had agreed to put to the semi-judicial agency. The Telegram quoted Crosbie:

“The board of the day took the position they needed more information. And the government of the day, which was a PC government, took the position that time was of the essence and given the amounts of money involved and the costs of delay, they were not content that the Public Utilities Board should hold another hearing on the matter.”

Nalcor’s limited reference to the PUB was based upon estimates for “a concept study” which the PUB noted is “associated with a range of accuracy in the capital cost estimates of +50% to -30%”. Following hearings, the PUB concluded that there were "gaps in Nalcor’s information and analysis;" some of the information was eighteen months old. They said that the information was not “detailed, complete or current enough” to determine the least-cost power option.

Did the Government of Kathy Dunderdale thank them for their work and offer to do better? No. She vilified the PUB, stating that she was “disappointed and puzzled” and declared that they had wasted public money.

Choosing a non-independent process to give the Government the answer they sought, the Premier promised a full debate in the House of Assembly as if elected Members, guided by a Party Whip, could offer oversight to a megaproject. The Tory Premier didn’t keep her word even on that empty promise.

This is the behaviour that Ches Crosbie is trying to defend. For anyone who has not forgotten that sorry saga, his is a pathetic attempt at excusing arrogance and mindlessness.
Only a few weeks earlier, Crosbie also told the Telegram that the Tory leadership had made the best decision with the information they had at the time. He made no mention of the contrived business case for Muskrat that included low-balled estimates, inflated demand, a non-existent Water Management Agreement and myriad other shortcomings.

In the vernacular, Crosbie is putting lipstick on a pig. The histories of Williams, Dunderdale, Marshall and Davis need exposure, not cover-up. Those leaders and their compliant Caucus Members, who still inhabit the House of Assembly, deserve banishment, not protection.
The House of Assembly has suffered a failure of Opposition since the defeat, in the 2011 General Election, of Liberal Leader Kevin Aylward, who opposed Muskrat and was dismissed by the public for his courage.

Crosbie, as the new Tory Leader, was handed a poisoned chalice to be sure, but he knew this in advance. 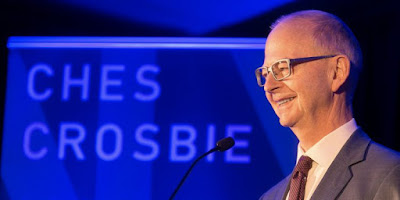 There is a sense of amateur hour around the neophyte leader anyway. As a practical matter, who would volunteer — as Ches did — that Windsor Lake is a bellwether for the next general election when the by-election outcome is far from certain?

How did his organizers not know that the residence of disgraced former Tory Premier Kathy Dunderdale was included in his door-to-door route? Those images are sure to bolster his campaign!

Ches Crosbie lacks some of the basic political lessons he ought to have learned at the feet of the ol’ man. And he doesn’t have a lot of time to catch up.

That said, I have not heard Liberal Candidate Paul Antle refute even one of the impossible claims about electricity rates and payment for Muskrat with which Dwight is weaving Antle's magic carpet in Windsor Lake.

Possibly the two are depicting what has long been the essence of politics: all you need is a good story!