NEWFOUNDLAND POWER SHOULD FEEL THE PUBLIC WRATH, TOO

As NL Hydro looks for an illegitimate 6.5% rate increase — smoothing in advance of socking you in the kisser with a Muskrat-sized punch — Newfoundland Power (NP) has applied for a 1.2% increase also to take effect January 1, 2019.

Electricity ratepayers are under assault at every turn.
The PUB has the best (legal) ammunition. It can say “no”.
The public shouldn't get careless either just because the increase sought is smaller than Hydro’s. NP is attempting to establish a precedent.

NP has always acted as if their shareholders’ interests are divisible from the public interest. In some measure that is true, except NP has taken self-interest too far. 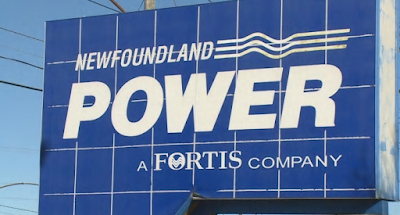 It will say anything to be on-side with Nalcor and the government. It fears them and, in the process, disrespects the public. This has to change.
The Company wants the PUB to approve the 1.2% rate increase just to bolster its return on assets, though it is already receiving a juicy 9.5% return on equity.
It justifies the additional return by arguing that its assets are at greater risk in a declining economy. It wants more money for the same service.
There are two components to the NP’s construct: one true, the other false.
The correct narrative is provided by the Conference Board in Canada. NP’s Application includes the Board’s negative forecasts — poor demographics, out-migration, unemployment increases… the whole enchilada.
The second narrative involves data — NP’s electricity demand forecast.
The two — the demand figures and the economic forecasts — are in conflict.
If the Conference Board of Canada, an independent think-tank, is correct, it follows that demand for electricity is likely to drop.
If the price per kWh increases on top of those economic and other forecasts — say by 50–100% — demand will drop off strongly, due to price elasticity (the effect of higher prices on consumption).

Picking up on reference to price elasticity in the Comments section, bear in mind that cost influences the public's purchasing decisons every day. Electricity is no different than any other commodity, whether fuel or fruit. As prices rises, typical consumer behaviour is to purchase less of it - or to switch to a lower cost alternative if one is available. Ask any furnace oil supplier or mini-split installer; they are very busy with inquiries from consumers making exactly this assessment.  While we are discussing the impact of a rise in prices on demand, bear in mind that a drop in price is likely to have the opposite effect. Hence, the concept of price "elasticity". Economists calculate those price/demand movements having observed the rate of change in many jurisdictions. Dr. Jim Feehan, in his submission to the PUB, cites local examples  and his calculations, which apply to forecast demand on the Island, are assisted by that data.
That said - despite the rise in electricity prices, NP’s recent demand forecast for residential and commercial users until the year 2020 (below) shows demand virtually unchanged. Though Muskrat is scheduled to come on line in late 2019 and the beginning of 2020 — when a big price boost occurs — demand is still shown to drop a negligible 0.2%.

Now, look at Hydro’s Exhibit which covers the period of NP’s Exhibit and longer. Again, the numbers show a small dip following Muskrat pricing, but otherwise growth in demand is consistent even against power costs of 18 cents/kWh plus HST (according to the Premier) by 2020. 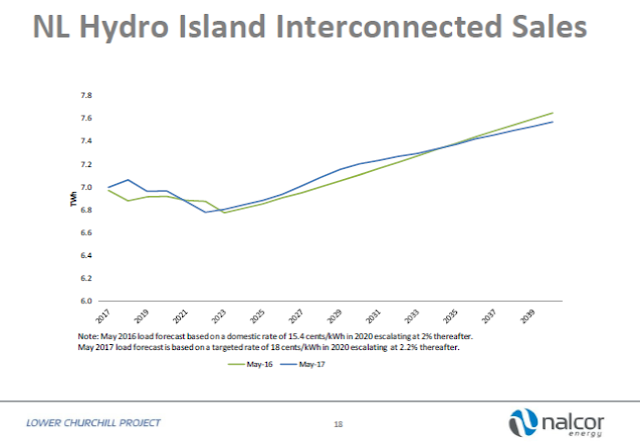 Both Nalcor and NP forecasts equally defy simple economic principles.
Thing is, if demand is not in jeopardy, NP has no case — if it ever had one.
The company’s duplicity is exposed in another way, too.
NP told the PUB that it subscribes to a price elasticity coefficient of -30, from which the calculation is made that a doubling of electricity rates will cause a 30% decline in demand.  But even if rates don’t double and instead climb by, let’s say, (only) 50% — due to rate mitigation — the math suggests that demand will still go down by 15%. Both the forecasts of NP and NL Hydro should reflect this simple economic reality.


Yet, NP, like Nalcor, ignores the fact. It wants you to believe that risk in the Newfoundland economic climate has dramatically climbed, but that it only affects them!


Of course, a big drop in electricity demand will cause a big drop in revenue for Muskrat — requiring taxpayers to ante up the difference.  Without sensible decisions by the Government consumers  may well end up with high power rates and a big subsidy from Government, too. The problem is a Pandora’s Box. The Premier is very sensitive about this in advance of an election. And NP is sensitive only to what the Premier is sensitive about.


Hopefully, the PUB will not be hoodwinked.


Newfoundland Power wants optimal profit even in a low-risk — regulated — business. But as to its responsibilities to a NL society that gives it laws, protection and a very generous rate of return, it is content to be a quisling — exactly as it has acted from the beginning.


Newfoundland Power should be careful.


The public wrath awaits to be unleashed on those responsible for the Muskrat debacle; just wait until the public gets those bills. Others — like Newfoundland Power — who may have been able to stop it, and didn’t try, will be assessed by a public not just mad as hell but one unwilling to countenance quislings.


For now, though, a good start would be for the PUB to just send NP unequivocal “NO”.
Posted by Des Sullivan at Monday, August 13, 2018