PlanetNL13: Busting the Premier’s Numbers Again
In PlanetNL12, an analysis of Government’s secretive two-tier declining rate scheme calculated the impact on three types of electricity customers.  The unfairness of such a rate scheme was made clear: the less electricity you use, the more steeply your Government wants you to pay for Muskrat.  This approach will tend to hit the many poor and working-class who struggle to pay their bills especially hard.  Meanwhile at the other end of the spectrum, the few who tend to have large high-energy homes will be pleased with little difference they’ll find on their power bill.

How did Government and Nalcor keep this unexpected twist of rate design?  Well, they simply didn’t want to tell us and for about two years they carefully misled us.

Elasticity and Load Forecasting
Elasticity theory has been much discussed on this blogsite so regular readers know what it means.  In simple terms for newbies, when the price of a specific good increases, its consumption tends to go down.  The effect in electricity markets is well researched and local Ph.D economists like David Vardy and Jim Feehan anticipate a coefficient of -0.4 to result from increased hydro rates which is quite consistent with the global literature on the topic.
What this means is that if the electricity rate were to double, the 100% rate increase would be multiplied by the coefficient to predict a 40% reduction in energy sales.  This would happen because consumers would find alternative energy sources (mainly for heating) and they would adopt habits to be more efficient in their use of electricity.  Overall revenue increase on electricity sales would be only 20%.

Repeating the calculation at a 50% rate increase (about 18 c/KWh) would result in a 20% reduction in energy needs.  Net revenue increase would again be only 20% higher than the pre-increase revenues.

As we have on the Island about $700M total retail electricity sales pre-Muskrat, a net 20% increase would theoretically provide $140M new revenue.  As the Muskrat PPA demands over $800M and savings from Holyrood might be in the vicinity of $160M, the ratepayers are coming up hugely short by $500M.  It’s easy to see there is simply no way ratepayers can afford Muskrat – yet all the smart minds at Government and Nalcor couldn’t see that coming.

On July 28, 2017, Premier Dwight Ball finally yielded to this truth when The Telegram advised he said the Government would have to offer up $400M.  So where is the missing $100M?  Well, The Premier has never spoken of elasticity, so it seemed at the time he ignored sound economic theory and overestimated revenue by $100M.  What a dumb-dumb, right? 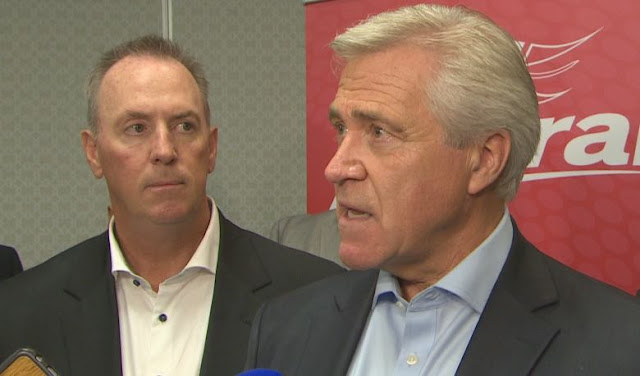 Next, consider Nalcor CEO Stan Marshall’s first presentation on the status of the Muskrat project. Nalcor’s electricity load forecast also appeared to be dumb to the effects of elasticity which is quite odd because all utilities understand it well.  In June 2016, Stan’s first major presentation on Muskrat included a load forecast copied below that to its credit was substantially reduced from the hyperinflated sham of his predecessor. 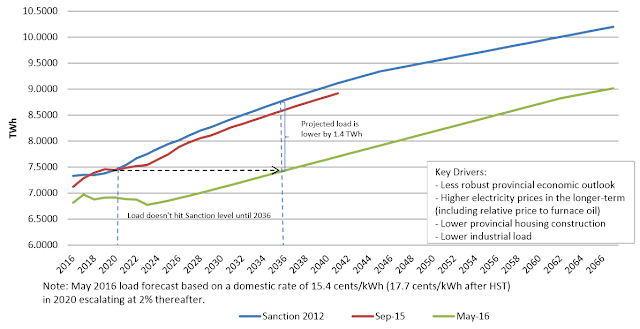 Still, there were three important problems that critics could not grasp.  Follow the chart’s green line.

First, as there is a roughly 50% rate increase used in the model, why isn’t the elasticity dip in energy sales 20% or close to it?  Nalcor’s prediction was only about a 3% decrease.  That’s too big a difference to ignore and struck critics as dumb.

Secondly, why is their dip delayed by two years after the rate increase becomes effective in Q2/20? The reality is high rate increases will have been known for many years prior to the completion date – there is no surprise factor at all here.  Surely, most customers with the means to do something will be ready to reduce their electricity consumption by the mid-2020 date when the massive price increase occurs.  Dumb stuff.
____________________________________
Also by PlanetNL
18 c/KWh - Warning - Not Exactly as Advertised
The Deception of Parity: Premier's Claim Busted
____________________________________
Thirdly, why the heck is load increasing after 2023 at a steady clip when the demographic and economic outlook for the island will be simultaneously weakening?  Who will be causing demand for all this expensive electricity that most won’t be able to afford?  Extra dumb stuff.  If there are other jurisdictions promoting load growth like this, this analyst has yet to find evidence they exist.

A year later, in June 2017, Stan released another presentation that slightly modified the load forecast, copied below.  The dip was now about 4% in 2022: that’s a hair more realistic but still a substantial way off what it should be.  The 2.2% long-term load growth remained presumably as sheer cheerleading hope.  The same set of questions as 2016 remained completely unanswered. 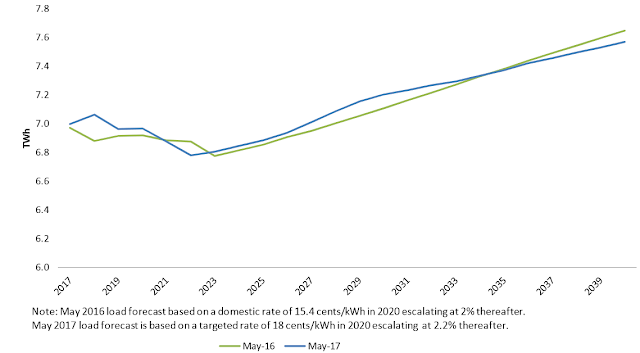 Take note in the fine print it says, “May 2017 load forecast is based on a targeted rate of 18 cents/KWh in 2020”.  Clearly Ball and Marshall had their ducks in a row on using that rate by at latest May 2017 and there is no indication it was a composite two-tier rate.

Through this entire period, the all-important load forecast seems to be in substantial error and it officially remains so in 2018.  Or so we thought, based on the assumption of a single rate of 18 c/KWh. Dwight and Stan have slyly kept the critics and the public misinformed on this key issue, until now.

Two-Tier Declining Rates Resist Elasticity
Dwight and Stan’s secret weapon relies on the hard fact that all homeowners and businesses have a certain amount of electricity they must use.  Essential uses of energy for lighting, cleaning, cooking, communicating – these things are known as lifeline energy.  Dwight and Stan intend to make everyone pay a high rate such as 22 c/KWh on lifeline energy.

It’s hard to use less lifeline energy and have it worth the sacrifice.  It is almost immune to elasticity effects therefore the elasticity coefficient is very low.  That subtle dip in the Nalcor load forecasts is clearly a result of the previously unknown especially high rate on the lifeline energy block where consumers have no avoidance strategy.

If set at 1000 KWh/month, the lifeline block makes up about two-thirds of total residential market electricity requirements.  The balance is seasonal electric heating where substitution threats for expensive electricity are available.  Minisplit heat pumps, oil heat, propane, wood: all are attractive if the heating energy block rate is 18 c/KWh.  At 9 c/KWh rate, electric resistance heating (baseboard type) will have most electric heat users sticking with what they have.

At 18 c/KWh, minisplit simple payback was attractive at about 5 years but at 9 c/KWh that becomes 10 years which will turn a lot of people off.  Sure, some will install them anyway, but the numbers will be substantially reduced.  Many of those who have already installed them won’t be happy with this news.

Despite the overall increase coming to their bills, those whose income is sufficient to allow them to grudgingly pay won’t have much incentive to turn down the thermostats at a rate of 9 c/KWh.  Neither does investing in new appliances or changing habits for other consumption when the savings are at 9 c/KWh – the impact on the bill isn’t worthwhile to them.

For those for whom any extra dollar on that monthly bill is a hardship, the poor and the working-class, cuts to their usage will happen even if they are only at 9 c/KWh.  There will be many keeping their homes cold and dark to try and save any dollar they can.  Their hardship is substantially worsened by this punitive rate scheme.

Adding Up the Evidence
Now we can see that the old load forecasts, one over two years old, were based on this super-low-elasticity rate model.  Dwight and Stan have shrewdly duped us all by pulling out an old and unexpected card.

Declining rates have not been widely used for a long time.  In the days of massive affordable hydro expansion, declining rates were used to grow demand for newly constructed and underutilized capacity.  Such policy was a positive in lowering rates for all ratepayers.
The circumstance for its use this time is not for the consumer’s well being.  It’s simply an economic lever misapplied in a punitive fashion.  Stan and Dwight may have stymied elasticity but they didn’t make electricity any more affordable.  Instead their scheme serves to raise rates for many while protecting a generally well-off few.

On paper, we might estimate the scheme could wring an extra $70M from the residential market segment. Apply a proportional increase to commercial rates and – Eureka! – we have now found that mysterious $100M only the Premier could see a year ago.

But surely the Premier knows blood doesn’t come from turnips and the poor don’t bleed money no matter how much harder you squeeze them.  It’s a certainty that Government will have to develop a massive low-income support program, one much larger than anything ever offered before, that will wipe out that extra $100M.

The main effect of the declining rate scheme is to concentrate revenue collection on the middle class, and that is the most favourable interpretation.

Meanwhile, the Premier appears entirely committed to burning $500M annually on Muskrat payback, a deficit burden that will cripple budgets for other vital Government services and eventually bring the Province to its knees.  Maybe the Premier should tell us the secret of why driving straight off the fiscal cliff is the right thing to do.  That one is really hard to solve.

Postscript
The above post was prepared before the Premier’s announcement at the campaign kickoff for a by-election candidate.  The Premier’s words generally seem to say the ratepayer will be exempted from Muskrat payback and that the PUB shall be utilized to set rates.  Certainly, this is an impressive and responsible stance to take.

There are certainly plenty of details yet to be addressed though.  In this era of fake news, often coming straight from the mouths of powerful politicians, trust is at an all-time low.  In Premier Ball’s case, this post still contains clear evidence that he has been committed to an 18 c/KWh average rate for some time – there is nothing to retract here.  Ball was also clearly wrong on his statement that 18c/KWh would be on par with the Maritime provinces – his track record is dubious.


In addition, numerous NL Hydro officials were recently on the witness stand under oath at the PUB hearings saying they are being directed to prepare to raise rates substantially.  How do we know this latest announcement by the Premier isn’t electioneering bluster and by October, Hydro is presenting much the same plan to the PUB all over again?

Mr. Premier, you had a great day today.  Deliver the details and clarity people are demanding and more great days will surely be ahead of you.