RATE MITIGATION AND OUR FISCAL CLIFF

The Government put out its rate mitigation plan last April prior to the provincial election.

It also asked the Public Utilities Board to examine rate mitigation and hearings are presently underway.

Unfortunately both efforts are being promised and undertaken in isolation, ignoring the real elephant in the room, our dire financial situation.

Both our own Auditor General and the Parliamentary Budget Officer of Canada have painted a bleak picture of our long term fiscal situation for many years but those concerns have been ignored and our government continues to budget for significant deficits for the foreseeable future. While their projections point to a surplus in a few years time it is a moving target and it is highly unlikely that, based on the current trends of revenues and expenditures, it will ever be realized. 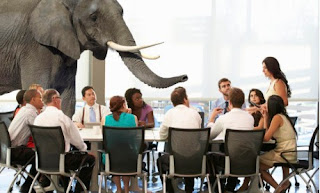 While I recognize that it is very difficult to reduce expenditures and programs that will have to be done as we cannot continue to add to our long term debt year after year.

This interest on this increasing debt will have to be paid for, reducing the amount of revenue  available to fund government services.

In addition we face a number of additional challenges which will have adverse impacts on our fiscal situation. Our population is both getting older and smaller in numbers. Our aging population is imposing accelerating health care costs and our declining and older population is reducing our tax base.

While hope of new oil fields fuels some optimism, it must be remembered that new oil fields are  in deep water, at a great distance from shore, will be costly to develop with reduced local benefits and face pressure to reduce our royalties. And we need to understand and accept that world wide public pressure to reduce dependence on fossil fuels will have an adverse impact on the exploitation of our oil and gas fields as it does for the other oil producing provinces in Canada.

If we continue along this road we are eventually likely to have further reductions in our credit rating. We have seen the first hint of this with the decision of Moody’s to downgrade our credit rating, citing continuing deficits and Muskrat Falls as the reason. Our bonds are still “investment grade” but we are going down a path to our bonds becoming “junk bonds”, with the resulting impacts on interest rates and even our ability to borrow at all.

Which brings me to rate mitigation and our fiscal challenge. The only sure rate mitigation tool is the fuel savings from the reduction in use of Holyrood, which the government estimates is worth $178 million a year. All of the rest is speculative at best.

I would like to focus on one of the rate mitigation proposals, which is the proposal to divert so-called “dividends” to rate mitigation. Those dividends do not materialize out of thin air. They have to come from our electricity bills which we have to pay upfront, and will be reflected in our electricity bills by adding them to the targeted rate of 13.5 cents per kilowatt hour. So they will come out of one of pockets and put back in the other. It’s a shell game.

The other factor is that those rates will be escalating by 2.25% a year. (Once ratepayers understand that, the race to put in heat pumps will a accelerate , reducing demand and causing further rate increases.)

But those “dividends” were already committed to paying off the $3.7 billion dollars we borrowed for equity in the project. Who’s going to pay for that? The answer is that we are, adding another hundred million dollars a year to our debt servicing costs. And where do we get that? We will have to go out and borrow that as well, if we can.

Our debt servicing costs are more than we pay for education. They will soon to catch up to health care if we keep going down this road, assuming we can still find someone foolish enough to continue to lend us the money.

We have two choices. Either we handle it ourselves or the federal government will have to step in and do it for us.

The essential first step is to educate ourselves.

We don’t as a society recognize the dire straits we are in. As an example, even what should be the most sophisticated government funded institutions, such as my alma mater, Memorial, are advocating new costly initiatives such as a Law School.

Which leads to a proposal, which I suggested in a recent radio interview on CBC, and that is the creation of a panel of our best and brightest to examine our fiscal situation and the impact of Muskrat Falls on that situation and to recommend solutions.

Secondly a select committee of our House of Assembly should be formed to receive the report and hold public hearings throughout the province. We need to recognize that this is a non-partisan issue.

I for one don’t want to have a faceless federal bureaucrat having to approve every expenditure we want to make. Do you?