STAN: DON'T LET THE DOOR HIT YOU ON THE WAY OUT


If the public didn't feel so well off, Nalcor CEO Stan Marshall would be gone in a Dunderdale minute. They need to tell Stan not to let the door hit him on the way out. April 2020, his scheduled departure date, won't come soon enough!

Just more than a week ago, Marshall graced the PUB Hearings on rate mitigation with his noble presence. One might have expected him to explain why thousands of transmission lines throughout the world operate using dependable computer software, yet even a two-year delay in the Muskrat Falls project isn't sufficient to get Alstrom, Nalcor’s contractor since 2014 (purchased by General Electric in 2015), off their duffs. Worse, the public has to be satisfied with Marshall’s simplistic assertion that the job is “complicated”.


The much-heralded former CEO of Fortis Inc. is proving that his real expertise is not in construction, but in the armchair management of existing operations. Fortis achieved most of its growth having purchased mature utilities. 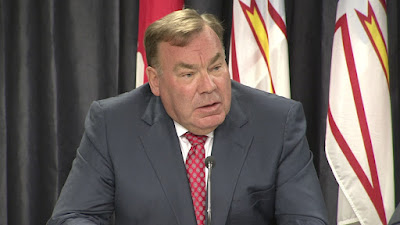 Regarding the late software, Marshall commented, according to a CBC news story, that “it's going to take two to three years before this gets to a state where everybody is happy with it.” That forecast does not bode well for a project that Marshall has assured everyone will deliver first power later this year and full power in Spring 2020.

Marshall has been CEO for nearly four years — since January 2016. He has certainly had time to assess GE’s abysmal failure and to have given them the boot. Ed Martin and Gilbert Bennett played footsie in a similar fashion with Astaldi. How many screw-ups, and for how long, does it take bureaucrats to make a decision?!?

This is the same, much-ballyhooed, Marshall who thought that the PUB might profit from his ostensibly considerable insights, including one that “Newfoundlanders will be another Newfie joke” if the Government decides to compress Nalcor’s organizational structure with that of NL Hydro. The PUB’s Consultant, the Liberty Group, had made the recommendation in an effort to find savings to help mitigate the worst effects of another big “Newfie Joke”, the Muskrat Falls project, thanks to many of the people with whom Marshall still surrounds himself. Try a new metaphor, Stan. That one is taken!

Marshall is essentially telling the PUB to back off, to not interfere with a group who have placed the Province in an unmitigatable state of penury not because we might overdo the Corporation’s dismemberment but because they might be... distracted!

That’s the kind of arrogance that continues to bolster Nalcor's tattered reputation.

The reasons why Nalcor needs dismantling most certainly include appropriate redeployment of its cost. But even if the Muskrat Falls project wasn’t already twice the original Budget, at $12.7 billion, or if the Inquiry had not uncovered a significant level of deceit and deception (possibly worse) on the road to project Sanction — and afterwards — the Crown Corporation would still only be due the gratitude afforded all workers at the end of the construction phase of a project. As it is, the public is again under threat by the very group who claim to know better — the very same people who owe them atonement, starting with the Executive Vice-President.

Once again, the carrot offered the public to play nice is the Gull Island project.
Some people have no shame!

The message is: interfere with Nalcor and the cost will be high. The CBC reported Marshall telling the PUB,  there is “so much work underway behind the scenes to develop more of the province's energy resources.” He even predicted that Gull Island could be developed within the next decade. This is the kind of chatter for which former CEO Ed Martin is renowned.
It is likely for that reason that a very fine contributor of research to this Blog over many years wrote Nalcor, under the Access to Information legislation, to get more specifics on all the dust Stan was kicking up at the PUB; in short, to see what was keeping all those good folks at Nalcor busy. Here is his question:

“No responsive records” and still “so much work underway behind the scenes.”

As Yogi Berra once said: It's like déja vu all over again!