ANDREW FUREY: A DOCTOR. BUT CAN HE DO MIRACLES?

If there is a single question that has been uttered by observers of the Liberal Leadership race in reaction to Andrew Furey’s decision to trade in his medical career for the Office of Premier, it is this: What was he thinking?

The query, of course, is less a commentary on his mental state than it is on the nearly impossible task many rightfully perceive awaits him.

At the outset, Dr. Furey should know that we congratulate him, wish him well and hope that, rather than possessing any claim to “visionary” status, he simply puts province ahead of partisanship, offers a fresh perspective on the way government relates to the citizenry, and brings courage as well as new energy to the Office of Premier.

As much as some may wish it, Furey should not be expected to be a miracle worker. We are all to blame for what has occurred; if the miracle isn’t in us (mostly), we are in really deep trouble.

Furey’s biggest challenge will occur during in the early days on the job. His first steps will telegraph the “tone” of leadership that will characterize his Administration.

Some of us wonder if we have to endure more months of deception as to the “real” fiscal state of the Province.

The worry is that he will allow his Administration’s tone and the Government’s agenda to be set by an undisciplined and terribly deficient Caucus, by unelected “fixers” in his Office and by the bevy of PR “spinners” who inhabit the Executive Council, who give “Ed Martin-style” deception the appearance of bureaucratic normalcy.

Nevertheless, political issues will be omnipresent in a “minority” Legislature.

He will be preoccupied with the silly requirement of a General Election within a year of a change of leadership (the legislation ought to be repealed) and, hence, with the timing of an election “Call”. In this context, the current fiscal environment, arguably, is not the best one for establishing standards of integrity and forthrightness.

Andrew can “sell” his soul to the leader of the NDP to prolong the life of the Forty-ninth General Assembly. But the cost will be high and include another year of “same ‘ol” in Newfoundland and Labrador politics. 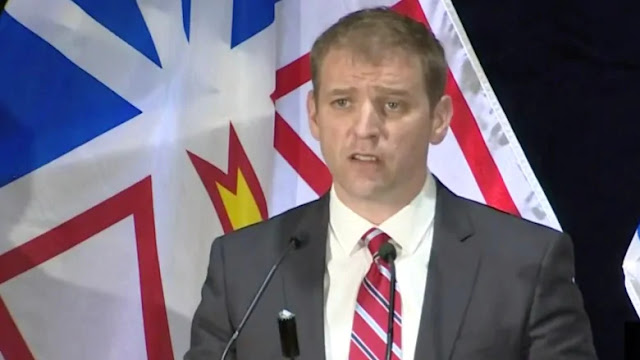 The best strategy for a new Premier inaugurating a fresh start is to make a clean break with his Liberal and Tory forebears. This is not the easy course; he must know that, when fiscal repair begins, the public will make little distinction between Furey and “fury”. But, if he fails to convince the public of his talents at the start, the misery that awaits him will hardly be worth the effort anyway.

To put the matter succinctly, Furey can lever his intelligence, energy and youth — and his disproportionate leadership win — to elevate his stature in the face of a demanding public, or he can be intimidated by his own inexperience and be satisfied with “ordinary”. I doubt that he has left one successful career to be a flop in another.

Still, until now, Furey has chosen rhetoric as a substitute for public policy, fearing, perhaps, that specific ideas might have cost him votes in the leadership contest. His recent confession to iPolitics writer, Roger Bill, that the fiscal situation “keeps me up at night” should not be taken too seriously, at least not until he imposes on the public a prescription for a decade of profligacy.

Andrew thinks rhetoric and ideas are the same-rhetoric-and-ideas.html

The issues that he will have to juggle are almost too many, given their complexity and importance to the province’s future.

A Budget, not an Update to one non-existent, ought to be the first order of business.

He should read the riot act to an unfit Liberal Caucus who for far too long aided and abetted “dither”.

He should tell public sector union leadership that, for too long, they have been part of the deception that underlies our financial situation, including the notion that public employees have no role to play in even the tiniest expression of fiscal change.

Presumably Furey will employ some expertise to assess how best to “right-size” government, reorganize and make health care more efficient, explain the facts of life to a bevy of isolated rural communities whose cost of service has no relationship with the real world, install a determined process of achieving a balanced Budget, and bring the Feds on board as “partners” in this process.

He should not rely only on local expertise. Newfoundland and Labrador is a village of conflicts — all of them personal.

Skill and intelligence will be needed to deal with the Muskrat Falls debacle, too, but that is a separate story. For the present, he should let neither Nalcor nor OILco get too comfortable. Neither one fits in the new reality, any more than they did in the old one.

The impact on the economy of COVID and the collapse of oil prices has left him no breathing room whatsoever. Furey will need all the common sense he can muster to resist financing foolish schemes that give heed to the new rallying cry for economic diversification.

The first priority should be to get more from our indigenous industries, including oil and gas. He should “read” the Atlantic Accord Act, resolve to sell off, as soon as practical, the Government’s equity interest in offshore projects, and tell the manufacturer’s agents at NOIA and the Board of Trade that “short-term-ism” isn’t his shtick.  He should ask someone independent — not from OILco — what work can reasonably performed on the Terra Nova FPSO. He may be in for a surprise.

That is already a lot to expect from a fellow who has barely dropped his scrubs. And they don’t include the known unknowns.

A big threat to the fulfillment of public expectations — probably not lost on Furey — is the possibility that PM Trudeau gets his “Majority” first. Until the “WE” conflict-of-interest controversy, it was his to lose. If there is any diminishment of the importance of the Federal Liberals’ six Seats in NL, Dr. Furey may as well be “Dr. Who?” Seamus, too, for that matter.

Finally, Andrew Furey needs to ‘beat the bushes’ for a complement of able candidates to run in the next election.

He’ll need a lot of help if he hopes to get a ‘drunk’ electorate to sober up.

Unless, that is, he is capable of a miracle.