The recent Opinion piece on our offshore natural gas resources by journalist Ian Esau in the international publication Upstream (reprinted in Uncle Gnarley last Monday) seems to have received considerable interest in this embattled Province.

So it seems a good time to revisit the issues set out in my piece on offshore gas published on the Uncle Gnarley Blog back on May 28th.

Let’s get the main proposition in both articles on the table right away – our oil and gas industry has to develop “decarbonization” strategies to fight climate change - or die.

As Mr. Esau so clearly put it – any offshore strategy that is not founded on a sensible decarbonization strategy cannot hope to gain the support of oil companies (let alone Ottawa) because increasingly the financial resources to implement such strategy will not be forthcoming from private capital markets.

Now “decarbonization” basically means producing the same amount of energy ready for consumption with a smaller CO2 footprint. The less CO2 produced generating a unit of energy the more points you get.

In terms of our offshore that could, for instance, mean putting a “ring fence” around the Grand Banks and working hard in a whole bunch of ways so that we radically cut down the CO2 associated with the development of all of the petroleum resources, regardless of form, coming out of that area.

And natural gas development within the ring fence is by far the best and biggest way of decreasing the CO2 produced per average unit of energy – the gas would help carry the oil.

Of course, the joint development of natural gas and oil obviously has the advantage of a lot of shared infrastructure, many shared services and unending “synergies” which also all add up to a reduced carbon footprint.

Now, it’s no good talking about a gas strategy if you don’t have a significant natural gas resource base. Our present gas resources total 12 trillion cubic feet which are divided 2/3 on the Grand Banks and 1/3 offshore Labrador.

For economic and technical reasons, I am going to focus solely on the Grand Banks, because the case can certainly be made that the gas resources offshore Labrador have already slipped permanently into the “beyond economic reach” category, providing a stark warning re the possible fate, in absence of proactive policies, of our Grand Banks gas resources.

Let’s start off by looking at a map of the Jean d ’Arc Basin showing its petroleum generation potential. 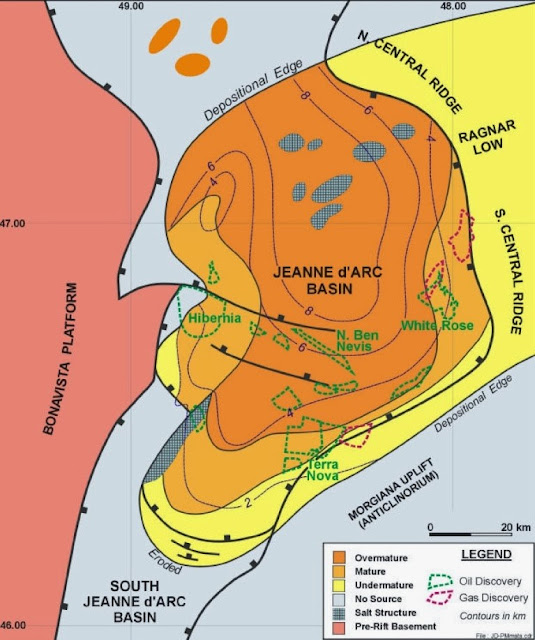 It takes more heat in the ground to generate gas than it does oil (usually by deeper burial) and the dark orange area indicates where the underlying organically rich Egret Shale (our main “source rock”) has been cooked sufficiently to generate natural gas.

The gas generation area covers most of the basin and it’s all in fairly shallow water.

Note that some of the gas generated within this orange area has migrated laterally and is found in such “oil” fields as Hibernia.

Also that in the Legend the dark orange area is labeled as “Overmature”; this is because the report from which it was taken was focused rather myopically on the lower temperature “oil” generation area.

For further details on the whole source rock issue see my Uncle Gnarley post of May 28th.

Natural Gas: Why Saving the Planet will help Save Newfoundland

Suffice to say, that in the oil & gas exploration business, in any given area, the volume, quality and degree of cooking of your source rocks is all important – it sets the upper limit on what you can expect to find and the probable split between oil or gas.

The really good news in the Jeanne d' Arc Basin is that we have tremendous quantities of a rich source rock that is cooked just right for gas (and some of it cooked right for oil as well - as per the oil reserves at Hibernia, Terra Nova, Hebron and White Rose).

Unfortunately we haven’t been looking for the gas!

For that is the resource on which our offshore future may hinge.

So what have we found so far in this area by way of gas resources?

The following are the 11 fields discovered in the Jeanne d’Arc Basin containing natural gas resources.

They are ranked in descending gas resource size.

The resources for the 5 fields on which no delineation well has been drilled can be taken as under-estimations; resource numbers generally go up with delineation drilling.

So far, virtually all the debate about offshore gas has been restricted to those resources associated with our four producing fields.

Now no doubt 70% is a big number but we need to remember that literally all the natural gas found so far in the Jean d’ Arc Basin has been discovered “accidentally’ – that is as a by-product of the search for oil.

Natural Gas has never been a primary target of any exploration well in our offshore.

A classic example of an “accidental natural gas find” was the significant 2010/2011 gas discovery at Ballicatters roughly half way between Hibernia and White Rose.

The next map shows the location of the Ballicatters find (and the general Jean d’ Arc Basin) relative to St. John’s. 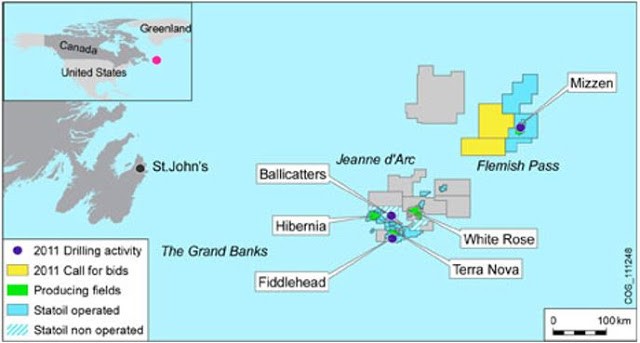 Sorry if it’s a bit out of date but Ballicatters is truly an “orphan” field – you won’t find a Provincial Government press release, let alone a report on it.  No Gas need apply! Only Muskrats.

As noted above, the CNLOPB puts the gas resources discovered at the Ballicatters M-96Z exploration well at 1 Tcf ; that’s usually considered a significant find; this discovery is owned by Suncor (operator) and Equinor on a 50:50 basis.

Thing is, this “surprise gas discovery” shouldn’t really be a surprise at all when one looks at the thermal maturity of the source rocks in the Jeanne d’ Arc Basin as illustrated on the first map above. The bulk of it (especially as you move north) is in the gas window, not the oil window.

Make no wonder Mr. Esau recommended that any gas strategy we might develop contain a vigorous gas exploration component.

So taking just the 13 Grand Banks gas deposits we already have, what would a truly joint development look like in a “best of all worlds”?

Certain constraints are obvious – three of the four oil producing fields (gas rich White Rose being the exception) are using virtually all their produced gas in the oil recovery process and  won’t be ready to “blow down” their gas caps for some time – so put them last in line for development.

But there’s some pure, non-associated gas finds like Ballicatters, put them first in line for development. And include here also the half of the gas at White Rose that is being re-injected into dead storage (thereby wasting a lot of it).

And there’s some smaller “pure gas” ones like Springdale, North Dana and even Trave that should be delineated plus numerous untested structures in the gas prone parts of the basin - they should go in the middle group.

This will require a couple of rigs focusing solely on gas targets to strengthen up the start group and the middle.

And for all of this, no new exploration permits need be issued and no additional long involved environmental reviews need take place other than that associated eventually with a full-fledged Gas Development Plan.

Gas Development in the Best of All Worlds

Obviously, this sort of offshore gas development poses more than a significant technical challenge, although it certainly would be that.

Pulling this off would, just as critically, depend on an unprecedented degree of co-operation between the present industry operators/ permit holders - but
perhaps Grand Banks companies of all sorts are now far more open minded about casting their various gas lots in together !

The prospect of hanging concentrates the mind.

So yes, to get an offshore natural gas industry going, we’ll probably need the development of a fair amount of new technology, new ways of co-operating between companies and perhaps, new flexible fiscal regimes.

But one thing for sure, the Industry’s current predicament, our economy and the world’s climate problems will not wait for us.

Without quick, decisive action, as Mr. Esau has warned, the window of opportunity will close (just as it has, in my view, offshore Labrador) leaving us with a very large Grand Banks “energy asset” that will be stranded and of no value – permanently.

Yeah - Things are rough out there in today’s transformative energy world. But we cannot afford to mess up  the development of our offshore natural gas resources.