The arguments for Muskrat Falls were always more qualitative than quantitative; they appealed to the common sense aspect of peoples' decision-making and thought processes.

Who has not heard claims of "green energy", "stable rates", "power for industrial expansion in Labrador", "lowest cost option", "export revenues", and "we need the power"?

It is natural for people to embrace assurances that are of the “motherhood” variety especially if they trust the one making the promise; however, ill-advised.

Indeed, the promise of Muskrat never seemed huge enough. And when it didn't, there was always former Premier Tom Marshall to up the ante with this mother of all promises: "the project won’t contribute to our net debt".

They were arguments difficult to counter without detailed insight. As a result, many people considered the project a proverbial "no brainer".

The arguments were often sufficient to win over people too busy, or not interested enough, to review the project in detail. It was a strategy employed by Nalcor to take advantage of a general apathy in the public discourse.  A complex project was reduced to simple sound bights. That’s essentially how it got sanctioned.

Over the past four years each of these arguments has been undermined.  They have been systematically shown to have earned the aphorism “Muskrat Myth”.  A summary of my Top 10 Muskrat Myths include:

1)      “Green Energy”:  Methyl-mercury concerns has challenged the “green” label of the project. The issue gained traction only after the project was sanctioned.  Nalcor was not successful facing down a Harvard University team of researchers whose conclusions were unequivocal.

2)      “We Need the Power”:  Initially Nalcor argued that the go forward 0.8% annual growth in energy demand used to underwrite the economics of Muskrat Falls, was a   conservative estimate based on 40-years of historical demand, and an increase averaging 2.3% annually.  Maurice Adams, one of the original opponents of Muskrat and a frequent writer to The Telegram, has been relentless in dismissing this demand forecast.  Mr. Adams correctly noted that 98% of the increase occurred in the first 20 years, of this 40 year reference period.  It was concluded that in the most recent 20 years (1990-2010) the annual demand increase was only 0.1%.

Considering the economic outlook for the province, does anyone expect demand growth in the absence of population growth?

Recently, in addressing their 2016 General Rate Application, Newfoundland Power questioned the impact that rate shock, associated with the high cost of Muskrat Falls, will have on demand growth in the province.  Unlike Nalcor CEO Ed Martin,  our privately owned utility understands the impact of rates on consumption.  In fact, in Volume 1 of the 2016 Rate Application, Newfoundland Power concluded that with aggressive management, the demand could actually decrease over the next 20 years, as shown in Figure 1.

It is clear that we need capacity in winter, and we need some modest growth in annual energy.  But few would argue that we will need 50% more energy over the next 50 years.  The impact on rates will be considerable, which will be the subject of Part II of this post. 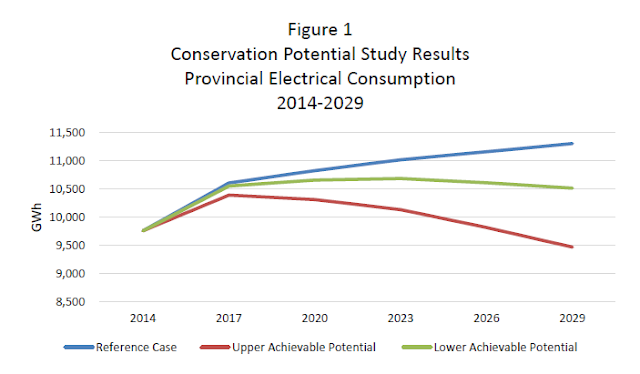 3)      “Muskrat Falls will meet our Winter Demand”:    When Muskrat Falls was presented to the PUB the impact of the Emera deal was not included.  When determining the lowest cost alternative, Nalcor excluded the 167 MW which must be delivered to Emera in exchange for building the Maritime Link.  When line losses are included, and the Water Management Agreement (WMA) is assumed to be fully effective; the maximum capacity that Muskrat Falls will deliver is ~640 MW at Soldiers Pond.  This is a net increase in island capacity of only about 145 MW.

Back in 2012, Nalcor advised the PUB that new generation will not be required until 2036, once Muskrat Falls was built.

Nalcor now advises the PUB that additional capacity will be required on the island by 2025, even with Muskrat Falls.

Muskrat Falls will generate lots of energy, but just not when we need it.  On those cold winter days, when we need the generation, it remains 1200 km away.  If Hydro Quebec wins the ongoing court case, dealing with the interpretation of the 1969 Power Contract, we will need even more capacity in winter, irrespective of our demand growth.
4)      “We Need the Power for Labrador Mines”:  It is clear that Muskrat could not provide cheap, consistent power to iron ore mines in Labrador, and still meet our winter demand.  It would require additional thermal capacity additions.  Muskrat would have provided energy to the mines in Labrador, but it was never going to be cheap.  The commitments would simply have required new generation to feed the island.

5)      “We Need the Power for Industrial Growth”:  Presently Muskrat Falls will generate on average 4900 GWhr per year.  Emera gets 20% under the “Nova Scotia Block”. 40% of the power will be used to replace Holyrood initially, growing to 80% by 2040.  However, as a result of the UARB process in Nova Scotia, Nalcor has committed an additional 1200 GWhr (25%) on average annually to Nova Scotia over the next 35 years (2200 GWhr total).  This was a major capitulation by Nalcor to secure the Federal Loan Guarantee. The award also eliminated cheap power for industrial development in Newfoundland and Labrador.

6)      “It will generate Export Revenue”:  Initial export sales of 2,000 GWhr (40% of MF output) will generate about $80 million annual revenue, based upon current market pricing.  To put that figure into perspective, interest on the ~$8 billion (the final figure may be much higher) which will have to be borrowed for this project will cost about $320 million a year.  Muskrat Falls will not be a significant revenue generator for the province until it is paid off in 2067.

7)      “Muskrat Falls Will Not Contribute to Net Debt”.  There is certainly no one in government arguing that Muskrat Falls will not make a significant contribution to the province’s net debt.  NL will borrow nearly $3 billion directly for the project. Another $1 billion of debt could have been avoided if dividends from Nalcor had been paid over the last decade.  $3 billion in direct debt by the province, will result in about $120 million a year in debt servicing costs.  This $120 million must be expensed in the given calendar year.  It is included in the annual deficit and net debt calculations.  Tom Marshall was wrong. Muskrat Falls will most certainly contribute to the Net Debt of the province.  It will nearly double the public debt!

8)      “Muskrat Falls was the Lowest Cost Option”:  This was always the rallying call for the supporters of Muskrat Falls.  In September 2012, I presented an option for building the Labrador Island Link only, and accessing the remaining Upper Churchill recall power.  At the time I authored the paper, this option was $4 billion cheaper than Muskrat Falls.   This initial paper was followed in December 2012 with two additional alternatives to the Interconnected Option which relied on a combination of wind, RECALL, and thermal.  All three options are currently believed to be considerably cheaper than Muskrat Falls, considering the project over-runs, and the collapse in the oil price.

"Lowest cost option" was, in my opinion, a clear misrepresentation sowed by the project proponents.

9)      “We Will Meet the Schedule”:  It is worth reading some of the language used by Nalcor during the 2012 PUB Hearings to explain their confidence in the project schedule (then a 2017 completion).

“Nalcor has directed considerable effort over the past five years on activities that have a direct influence on capital predictability and ensure the company’s cost and schedule expectations are realistic and achievable. An extended focus on front-end loading and defining the project during the planning phase (pre-DG3) is also key to addressing potential risks and avoiding cost overruns. The process provides the critical information needed to make decisions towards project sanction (DG3).”

Now, 3 years after project sanction, the schedule is not nearly as certain.  During the project update in September 2015, Nalcor would not even offer the public any completion date!  The project schedule is a considerable challenge. It is a source of great worry given the precarious fiscal condition of the Province.

10)      “We Have Confidence in the Project Costs”:  Again it is worth revisiting some of  the Nalcor language used during the PUB Hearings in February 2012.

“At DG3, project definition will be well advanced and the project cost estimate will include firm contract costs from suppliers and contractors. This, in combination with the advanced engineering and field work, favourable site conditions and a clear understanding and respect of the risks that remain will enable accurate project outturn cost predictability. The degree of project definition at DG3 will place the accuracy of the capital cost estimate within the AACE Class 3 range, closer to the narrower range of accuracy according to that standard.” Jason Kean explained that the narrower range of accuracy for an AACE Class 3 cost estimate is ±10%.”

These ‘Muskrat Myths’ were allowed to be propagated by a very strong communications strategy from Nalcor (Dawn Dalley is extremely effective in her job), a weak and disjointed opposition to the project, and a public review process; one ring-fenced by the government.

Of course, there were a group of ‘Nay-Sayers’ to the project.  One of the first, and most effective, was Dave Vardy.  He should be commended for the work he has done to educate the public on the Muskrat Falls project.  A true non-partisan, Mr. Vardy is driven purely by a deep concern for the province.  He is a ‘Muskrat Myth-Buster’.

David Vardy continues to seek information on the Muskrat Falls project, and has recently completed a number of access to information requests in an attempt to remove the current obscurity from the rate structure consumers will face in the future.  Stable electricity prices remains one of the few arguments for Muskrat Falls. Ostensibly, this is a matter easily quantified. Strangely though, in spite of all their claims, Nalcor has never provided a clear and consistent calculation of future electricity rates.

In Part II of this post, I will report on my investigation into this issue and offer an analysis of the results. “Long term stable electricity rates”:

if this Muskrat Myth is busted, are there any left?