The public, especially public servants, will pay a big price for the last decade of recklessness.

It is fine for the NAPE Head, Jerry Earle, to have reminded Anthony Germain on the CBC Morning Show recently, "this is a government that said there would be no layoffs". But such lamentations are meaningless when it is clear deficits and the growing public debt are unsustainable. The howling will not have much currency with fired workers, either.

Jerry Earle has a big problem. And it is not just about a bloated public service. Issues, other than labour costs, also affect labour.

That is what he fails to see. 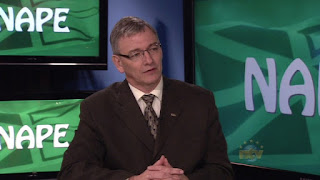 Incredibly, Jerry won’t ask: how many public servants will get axed for each billion dollars the cost of Muskrat Falls climbs?

The operating deficit is one thing: but how many more will be pushed when the cost exceeds $10 billion, $11 billion, $12 billion, or more, as many senior engineers believe it will?

Earle met with Premier Ball last week. Do you think he thought to demand a full and independent review of Muskrat, one that left no doubt it would contain a thorough basis for decision-making, including the data necessary to determine if it should be shut down?

Public servants will be sacrificed, to be sure.

But, the truth about Muskrat and the incompetence of Nalcor is already proven in the litany of cost overruns, and other well-known problems; Jerry Earle doesn’t see that a good many more public employees will become sacrificial lambs as they mount.

He, no differently than CUPE President Wayne Lucas and NLTA President Jim Dinn, will write words of protest and derision as the health care and education systems are torn apart.

But for them, like the small business people in St. John’s, too, who are just now awakening to the myopia of municipal minds, fiscal crisis was never once given a moment’s forethought.

Union leaders have mandates to protect their membership from potentially harmful public policy. Indeed, one can think of few organizations with a mandate as singular or as well-financed to assess those perils as NAPE, CUPE, and NLTA.

Fifty cents of every dollar saved, when the government wields the ax, will represent fired workers, many with families.

A real leader would have been ready to present to Dwight Ball the terms of the Muskrat Review. He would have made it clear to the Premier he will be dissatisfied until the reviewing authority meets the Union’s satisfaction. He might have reminded the Premier NAPE has political power and is willing to use it. He might have used the opportunity to demonstrate that power can be calibrated to exceed rhetoric.

It is too late for Jerry Earle to prevent many of the firings that will occur, but he can insert himself in the decision-making process in a way that ensures the cuts are not misplaced; that any money saved is not wasted on what is very likely a sink-hole.

But, as the incomplete is the EY terms of reference confirms, Jerry is capable only of siding with Siobhan Coady; the latest in a line of shallow Natural Resources Ministers content to be Nalcor supplicants.

I am tired of the Jerry Earles. They are found not just in Unions, but at the Board of Trade, at the University, and in the professions, too. They are all too busy having breakfast to think about lunch.

I have a problem with people being pushed out the front door, as Nalcor’s Ed Martin heads out the back exit, not with what’s left of the Treasury, but the balance of our borrowing capacity.

I have a problem offering opinions to government under the façade of public engagement, on ways to resolve the crisis, when I know Nalcor will be allowed to squander savings from real people, their lives thrown in disarray.

All that is heard is an impotent and hollow NAPE President commenting: 'Dwight Ball will be going back on his election promises, if he conducts a lay-off'; as if that kind of comment registers on either the meek or the frightened, as Dwight Ball certainly is.

Earle vowed to be “more assertive” in displacing Carol Furlong as NAPE President, but he seems unaware that it is too late when the pink slips are distributed.

Furlong, the CUPE and NLTA leadership, too, gave no help to the “naysayers” who advanced a compelling case that Nalcor had contrived the “business case” for the project.

The warnings, even then, spoke to the threat of cost overruns which threatened the viability of far better conceived projects throughout the world.

But the union leadership remained mute, unwilling to challenge the Dunderdale Government, or consider the consequences, if the “naysayers” were right.

Like Furlong, he could only see the small picture of the next pay hike; the larger one depicting irrational exuberance, outright megalomania, deceit, and who would have to pay for the misdeeds to which these things gave birth, eluded him.

Now, Jerry Earle is President of NAPE.   “Assertive”, for him, is an articulation of the same old rhetoric except, in the current environment carrying less punch, if it ever carried any.

Earle will preside over the unceremonious firing of a good many public servants, just as Wayne Lucas and Jim Dinn will act surprised as CUPE and NLTA memberships face, not just cuts, but the greatest challenge in the history of the local union movement.

Public sector employees need to know their hapless leadership allowed delusion, as much as complacency, to prevail over their fundamental interests.

Jerry Earle will dither as his members write cheques to the dozens of individually owned corporations which protect the tax status of the $300,000-$500,000 paid each of the project management team.

He will watch as the price of Muskrat rises every year.

Jerry will wave “Good-Bye” as public servants are given the door.


They will say: There goes Jerry. Being assertive.
Posted by Des Sullivan at Monday, February 08, 2016