Apollo reserves a place, in both Greek and Roman mythology, as the god of music, art, beauty, light, and knowledge.

But there is nothing artful, pleasant, or beautiful about the Apollo, the aged and ill-kept ferry so named, plying the Straits of Belle Isle several times a day between St. Barbe and Blanc Sablon.

As my vehicle crossed over the dock into the vessel, I spied licence plates announcing Texas, New Hampshire, Ontario, as well as Newfoundland and Labrador. A little later, I was given to wonder what their owners were thinking.

While bemusement seemed adequate enough at first, the walk from the car park through the doorway onto several flights of stairs, leading to the reception area, gave even this reluctant tourist fair warning that any expectation of relaxation within pleasant, comfortable, clean, and modern surroundings, might be excessive.

A time warp had been entered. 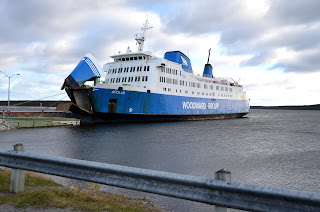 Placed into service in the early 1970s the Apollo still exhibits the décor of that earlier time and bears all the wear and tear, too.

Dated is one thing; but when datedness is joined, as is often the case, with its cousin, dirt, it is hard to differentiate the two.

No such confusion endured in the men’s bathroom where the floors and the walls were not clean and where the uncovered refuse containers sat exposed between the sinks, within the same cabinet; the Scandinavian standard of the 1960s and 70s now, for some unapparent reason, thought suitable to the Newfoundland and Labrador of 2015.

The shiny wad of pink bubble gum that was pressed into a stile above the urinal, as if an adornment, seemed out of place even amidst the surrounding squalor.

It was time to find a seat, a place to view the fast moving water of the Straits, catch a short nap, and talk about the possibilities for a salmon or two with an old friend. Exiting the washroom, the deep blue (or was it purple?) carpet brought back memories of my early entry into the construction business and the yards of “high pile” that made its way to the City dump.

The “Reception” area is where travelers hang out for the one and one-half hour crossing.    I had planned to join my friend in the same row but his look of alarm telegraphed warning, deterring my derriere from entering the concave seat; the collapsed foam offered a depression large enough to engulf one far more rotund. Across the aisle, the back would not stay vertical on another chair. Like the carpeting, the fabric covering all the chairs looked not just dated but unclean; the condition did not seem to be a recent manifestation.

Having secured a seat in the row behind my fellow tourist and robbed of conversation, I had time to conduct a much wider inspection of the physical assets on which I knew some part of the public purse is spent.

The T-Bar ceiling and walls seemed original to the structure; the laminate that cased the window wells was frequently chipped.  Several windows were replaced; but no one had bothered to paint the lower rail area left uncovered by the narrower mouldings of the more recent inserts.

I did not bother to visit the cafeteria though my friend, who had a look, decided he could wait.

Cleanliness is all too often a hit and miss affair in public places, though the laxity of management’s stewardship on the vessel was confirmed upon my return crossing, four days later.  The same pink bubble gum located on the wall above the urinal, noticed during the first crossing, had not warranted the janitor’s attention.

I had some time to think about the millions of dollars the government has invested in a world class marketing program to attract tourists to the Province. Many of them must have thought that the money could be better spent.

They might have thought, too, that our government can’t write standards of either repair or of cleanliness into a long term multi-million dollar tender.

And, if such low standards were thought adequate within a space where passengers relax and eat, what might be lurking in the engine room?

Of the Labrador residents for whom the ferry is a vital service, how could anyone have concluded other than that both the government and the operator believe: “that’s all you deserve”!

In contrast, there was nothing about the ferry the people at Labrador Tours copied.  They promised a world class fishing trip, enhanced with kayaking and hiking, if I chose. No small promise. But they delivered. The accommodations at the historic lighthouse site at Point Amour, managed by them, were spotless; the staff were always professional; the food would have made Carl Wells salivate.

By comparison, any expectations of a trip aboard a ferry boat are minimal at the best of times. But is it too much to expect that such an essential service, linking visitors and their first impressions of relatively unspoiled Labrador, might, at least be, if not modern then uncompromisingly clean? Is such a modest expectation really unattainable?

Of course, new and modern is no guarantee of cleanliness anyway.

Besides, whether it is performed well or poorly, isn't the cost of 'clean' the same?

Isn't the state of the Apollo Ferry actually about the competence of management, including the government that pays the ferry contract?

Recently, the Minister of Transportation and Works scuppered plans for “an enhanced and long-term ferry service contract for Labrador”. The implication is: don’t expect anything to change.

That would be a mistake.  The Minister can and should do more.

As a priority, he and the Minister responsible for tourism should pay the Apollo a visit.

They will want to take along some sunlight soap, an entire marine grade interior for the reception area, including carpet and seating.

The Minister of Transportation and Works should also let someone who understands ‘maintenance’ and ‘cleanliness’ write the next ferry contract.

Inspections are an integral part of any due diligence test of service delivery; benchmarks of performance, together with a history of persist failure to perform, make them relevant and necessary. Otherwise, the result is exactly what, reportedly, the public faces on that crossing, day in day out.


Until people, their taxes, or just their tourism value are treated seriously by public servants, by contractors, by politicians, the name Apollo will be synonymous with insult.

Rather than boast even a few of the strengths of the Greek and Roman god, it will merely serve as another metaphor for incompetence and neglect.
Posted by Des Sullivan at Thursday, July 16, 2015