Due to the size of this project, the remoteness, and the complexity there should be no surprise that the ramp up of the major activities are taking  longer than proposed in Nalcor’s optimistic original plan .

The delay has been  documented in the oversight reports produced by the provincial government, even if the reports continue to put the best light on difficult position in which Nalcor finds itself.

The following table summarizes the schedule progress on the Muskrat Falls Generating Plant:

The schedule covering the generation portion of the project is in deep trouble.

The oversight reports acknowledge this fact, and provide some glimpse into Nalcor’s mitigation efforts.

This excerpt is from page 31 of the September 2014 oversight report: 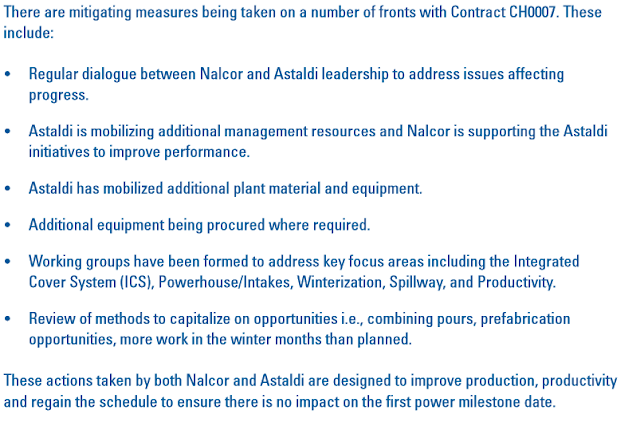 From page 17 of the December 2014 oversight report:

From Page 9 of the March 2015 oversight report: 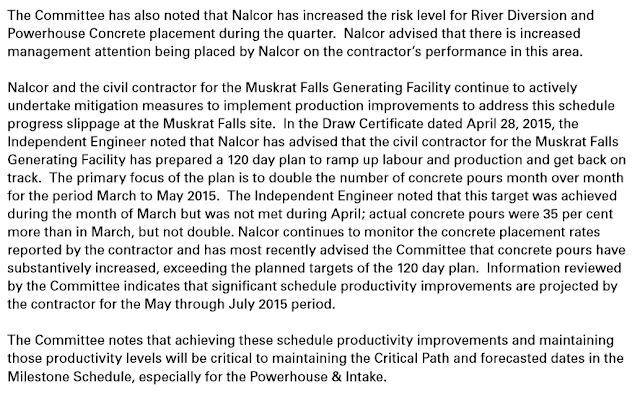 It should be no surprise to anyone, in consequence of all these challenges, that Nalcor CEO Ed Martin is  starting to prepare the general public for delays to the project. The question is, what is their magnitude? Just how bad are they, really?

As correctly noted in the March 2015 oversight report the productivity improvements in Q2 2015 are essential to meeting the final milestone schedule.  For the Muskrat Falls team, the summer of 2015 is really “make or break” for the project.  They need to get the project back on track before the construction schedule is hampered yet again by another Labrador winter. Winter begins earlier in Labrador than it does on the Island. The project team knows this.  The questions is this:  is the productivity improving at a pace where the schedule can be recovered?

Figure 1 provides what in the industry is called the S-Curve.  It contains a plot of the planned progress, versus the actual progress.  It is the data presented in Table 1, shown graphically so that the user can visually see where the project sits.  When the lines diverge, as they are below, your project is running behind schedule. 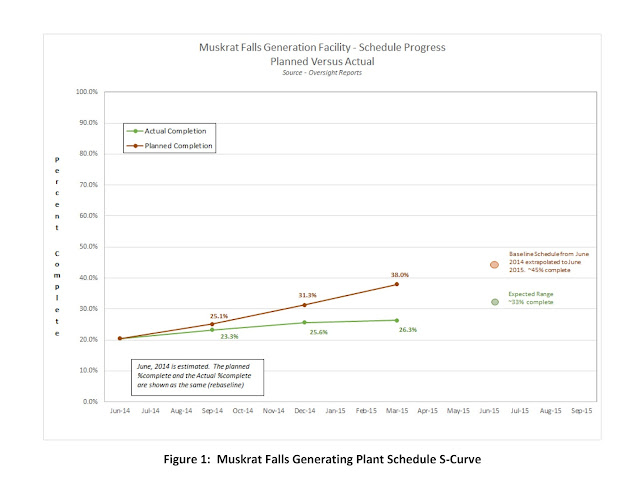 Within Figure 1 the Author has attempted to extrapolate where the schedule will be when the next oversight report is released.  Following the planned curve, in July 2014 Nalcor would have expected the MF plant to be over 45% complete.  But where will the actual levels be?

If Nalcor have any hope for schedule recovery they must first start meeting their originally planned productivity targets.  In the July 2014 schedule, they planned to complete about 6.7% of the project in Q1-2015.  With all their mitigation measures, Nalcor should be looking for about 33% complete by the end of June.

If this target is met, the public should have some faith that the schedule can be recovered and first power is achieved in early 2018.  If this target is not met there should cause for alarm.

However, if the % Completeness at the end of June is 30% or less, then the public should have no faith in the schedule produced by either Astaldi or Nalcor.  It will be time for the oversight committee to step in and request an independent schedule review.
The end of June was 3 weeks ago.  Nalcor have this data;  they need to release it to the public.

If the summer of 2015 does not result in this project getting back on track we can expect full power from Muskrat Falls to be deferred to 2019 at the earliest.  This has far reaching impacts on the security of our electrical system and the cost of that eventual power.  It is a matter of public interest.