Guest Post by Cabot Martin
Work has recently started on Nalcor’s North Spur “stabilization” construction activities at the Muskrat Falls Project. So far, this has involved the stripping of trees on the upstream and downstream sides of the North Spur and the use of heavy excavation equipment .

The North Spur is known to be unstable and such activities can only heighten the risk of collapse.

Such a collapse has the potential for catastrophic impacts on property and lives in Happy Valley-Goose Bay and Mud Lake.

Nalcor has not made public a risk assessment of this danger; all released Nalcor “dam break“ analyses have been restricted to the proposed concrete dams on the south side of the Lower Churchill River.
Lacking a Risk assessment there is no Emergency Preparedness Plan. 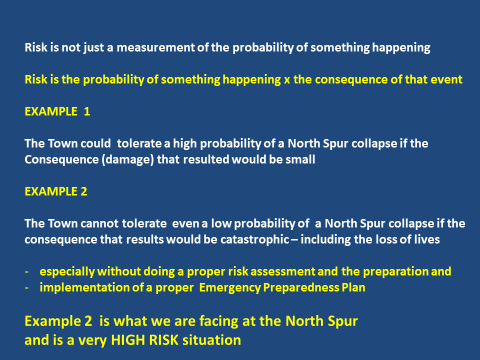 On July 2,2015, I hand delivered the attached urgent letter to the office of the Provincial Minister responsible for dam safety, the Honourable Dan Crummell, Minister of Environment & Conservation; no reply has yet been received. 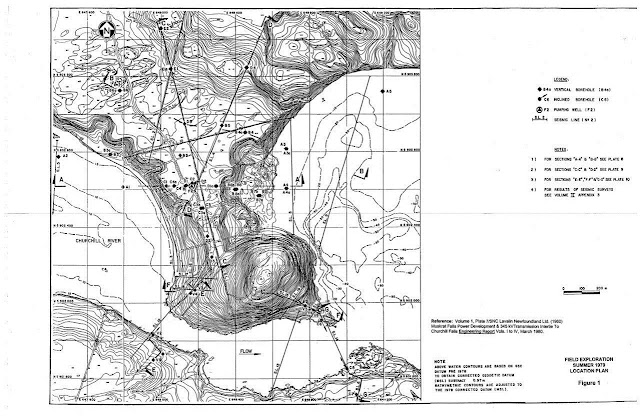 Dear Mr. Minister:
I am writing on an urgent basis concerning the North Spur instability issue at the Muskrat Falls power development of the Lower Churchill River in Labrador and your responsibilities under the Water Resources Act SNL2002 c W-4.01 as amended (“the Act”) in relation to Dam Safety.

I wrote to your predecessor, the Honourable Joan Shea on March 14, 2014, on this general matter and received a reply from Minister Dalley dated May 14, 2014. This letter will not repeat my arguments made there which still seem valid in spite of Minister Dalley’s reply.

Indeed, it is the core of Minister Dalley’s reply that I wish to address
– namely that a “Dam Safety Review Report “ and an “Emergency Preparedness Plan” need not be prepared and filed for approval until impoundment takes place or is imminent – presumably pushing off such matters until around 2017.

This position serves to place the residents of Happy Valley Goose Bay and Mud Lake at great risk during North Spur “stabilization” activities without the benefit of an Emergency Preparedness Plan.

This is totally unacceptable and a dereliction of your statutory Ministerial duties.

Based on a picture taken in the last week or so from the Trans Labrador Highway, it is apparent that Nalcor’s “stabilization” activities on the North Spur have started with the partial, and presumably on-going, stripping of trees from the top and sides of the North Spur.

This presumably will be followed by the extensive use of heavy excavation and construction equipment.

Both these activities have the potential to destabilize the North Spur during so-called “stabilization” construction activities.

For instance, the denudation of the North Spur has exposed the unstable soil of the North Spur to the erosional effects of sudden, prolonged thunder showers at this time of the year.
Any resulting North Spur collapse would release the tremendous amount of water presently “impounded” upstream by the North Spur – which acts, as Nalcor has repeatedly said, as a “natural dam”.

Such a collapse would also likely involve the liquefaction of millions of cubic meters of Quick Clay both at the North Spur and along the river as the Lower Churchill cuts out a new channel, by-passing Muskrat Falls and extending (based on relative elevations and river bottom soil conditions) in a deepened river valley all the way back, or a good part of the way back, to Gull Island.

This would have an incalculable and devastating impact on the lives and property of downstream residents.

And furthermore, it has been reliably reported that a “major slippage in the excavation works” at the Muskrat Falls project  has already taken place. I strongly urge you to investigate this matter to see if any such slippage took place and whether or not the North Spur was involved.

Due to the blanket of secrecy that Nalcor has thrown over the whole Muskrat Falls project only a Ministerial investigation can determine whether or not such slippage has taken place.

But I must stress that the need for an Emergency Preparedness Plan for a North Spur collapse during Nalcor’s “stabilization” activities remains whether or not any such “slippage” has already taken place.

Nalcor has already admitted that,even in its natural unaltered state, the North Spur is unstable and at risk of collapse; its current construction activities can only serve to make the North Spur even more unstable – at the very least while the “stabilization” measures are being put in place.

So I ask --- where is the Emergency Preparedness Plan that is urgently needed to protect the residents of Happy Valley Goose Bay and Mud Lake should a North Spur collapse take place during the present “stabilization” construction activities?

This is obviously a matter not just for onsite worker safety but also involves all downstream residents. And no Emergency Preparedness plan can be effective if not made public and adequately communicated.

You have the jurisdiction and duty to act under your “Safety of Works” oversight duties under Section 44 of the Act and your right to issue Dam Safety directives under sub-section 44(3).
I also refer to the requirement under Section 48 of the Act that all persons wishing to construct a dam must file an application in the form set out in Schedule C  which must contain both a “Dam Safety Review Report “ and an “Emergency Preparedness Plan”.

These critical documents focus on such issues as:

(1)  the amount of warning time downstream inhabitants would have before the onrush of water and liquefied mud from a North Spur failure hits the Happy Valley- Goose Bay / Mud Lake area -  a factor that greatly determines the potential for downstream loss of life;
(2) the probable area that would be flooded/buried; and
(3) the probable consequences of such a flood/mud flow in terms of both financial loss and loss of life.

It must be emphasized that the sudden onrush of the combined flood of liquefied North Spur “Quick Clay” together with, and driven by, the release of the presently naturally impounded river water could have an entirely different and potentially far more devastating character and impact from that that of a concrete dam failure.