THE PUBLIC LIBRARIES FIASCO: BUMPKINS ON A "B" TEAM

Education Minister Dale Kirby is “surprised that about half the people who attended a consultant session on the future of libraries in Newfoundland and Labrador walked out in frustration”, according to the CBC. Kirby shouldn't be “surprised” at all. It was an appropriate response by a public aghast that politics is so badly broken in this province.

When an elected Government sends out an accounting firm to perform a role politicians are expected to do daily — on a completely non-accounting issue, one that has no technical underpinnings — you know you have elected the “B-Team”.

Don’t misunderstand. It’s not as if we had the option of electing an “A-Team”. That wasn’t on offer by any Party. But the Liberals are so oblivious to the purpose of politics, and their role in it, that we are left to worry not just they are second-rate but that they are a team for which the “B” stands for “bumpkins”. The terminology is deliberate. It refers to those who are more ignorant than uneducated.

This Government should have realized that it miscalculated on the library closures in the first place; that the attempt to save $1 million — when the real goal ought to have been saving several hundred million — was not just silly, it detracted from achieving the larger target. 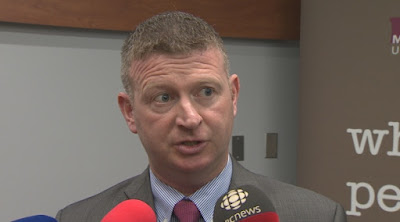 Politicians are elected to be the voice of their constituents, to hear their concerns, to elevate their priorities. Members on behalf of their constituency, Ministers in their particular public policy area, are expected to influence Government decisions through the mechanisms of the House of Assembly and — more pragmatically, and on a timely basis — in Caucus and Cabinet.

The issue isn’t just about public libraries; this is simply how politics should be practiced. It is true that MHAs spend a great deal of time dealing with local community councils and constituents’ personal issues — breaking through bureaucratic inertia and untying red tape. But that is not their primary role.

The role of a politician is to talk to people, to listen to them, to make assessments of public policy matters and how policy changes might relate to the broader society. This is the essence of representation, of democracy in action — the elected, the people, and the democratic institutions operating within a continuous feedback loop.

How should the discourse manifest?

Primarily, it should be reflected in the decisions Government makes. Good judgments occur when sensible, careful, and experienced people have listened, made thoughtful assessments, and shared them with the policy-making institutions of which they are also a part.

The process which Education Minister Dale Kirby has introduced to reassess public libraries has trashed this essential political process. He is not just burning up money unnecessarily — on high priced consultants — he is subverting the very mechanism on which a working democracy is founded. He is facilitating a process in which he — and his elected colleagues — are allowed to hide from public view and from engaging people face-to-face.

That Premier Ball is allowing this travesty of politics to take place, in front of his own eyes, is a measure of his own political sophistication. On issues such as this, we shouldn’t have to ask: what is the calibre of “judgment” at the Cabinet Table? But we must.

Equally, we might inquire: why wasn’t the idea trampled upon the very minute it was uttered? Are the handful who claim to have a clue — Perry Trimper, Cathy Bennett, Gerry Byrne — just watching as Ball and their other Cabinet colleagues become more deeply mired in a political sink-hole from which there is no escape?

When a Government can’t clear a simple — but essential — issue of public libraries, costing a mere $1 million, as it burns up the political capital the Government needs for far more complex and contentious issues, how can we possibly expect them to make good decisions on the Budget deficit, on appointing an expert Panel to review the North Spur, or even to provide oversight on a runaway “boondoggle”?

The Ball Government is not operating at a very high level. And it consistently shows. Some Ministers may be smart and well-educated. But a Cabinet whose judgment is so poor that it will let an accounting firm supplant an essential political obligation — as the elected Minister responsible hides — suggests nothing more than a “B-Team”.