HEY CRITCH: LOOK WHO WANTS TO BE PREMIER... AGAIN!

Paul Davis wants to lead the P.C. Party into the next general election. Any sensible person would have to ask: why him? Surely, there are better choices.

Davis was given the boot in the General Election last year.

Still, it is almost impossible to clear the mind of the amateurish missteps with which Davis greeted the public as he left the Lieutenant- Governor’s residence.  The appointment of an unelected Minister, unfamiliar with both political convention and the requirement to seek election, still resounds.

Then there is the Department of Justice fiasco — dropping "Justice" in favour of "Public Safety" — which confirmed that he understood enforcement but not habeas corpus.

And to that issue: why had he no stomach for an Inquiry into the dodgy Humber Valley Paving affair? In his police mind, is there no accountability for political cronies or for politicians who pander to them?

Davis truly earned the appellation "the Constable Premier" on this Blog. No, it was not a compliment to the man now claiming "vision". 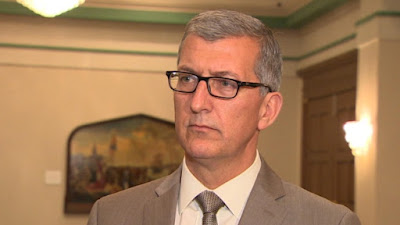 Judgment is fundamental to suitability for high office.

It is good judgment that prevents a Premier from phoning a police officer who has just pulled the trigger in the Don Dunphy tragedy "to offer him support" — forgetting, it seems, that he owed deference to the slain man's family, too.

It is good judgment that keeps a Chief of Staff earning $152,000 and failing to hire more (and possibly keener) talent with that money — something a good Opposition needs.

Isn’t it judgment that distinguishes good and bad governance?


Some issues stand out in Davis’ one year of playing Premier.

The pre-election Budget is one. It provided for the third huge deficit in a row — nearly $2 billion on $8 billion of spending, $2.4 billion of new borrowing (source: Budget Update) and forecasted continuous annual borrowing in the $2.0 to 3.7 billion range — without provision for now recast Muskrat overruns.

Davis was one of the key flag wavers of the “boondoggle”.

Did he not conspire, with former Nalcor CEO Ed Martin, to keep a lid on news that the project had exceeded the $11 billion cost estimate, leaving it to Stan Marshall to confirm the $11.4 billion figure only 7 months after the General Election and only 2 months after Martin got the boot?

Isn’t this the same Tory leader who, even now, supports the project — still inured to the catastrophe of a doubling of people’s electricity bills and a vastly enlarged public debt?

This, of course, is all old news.

Davis wants to take this same skill-set — what he describes as ideas, vision, and focus — and parlay them into a new mandate.

You have to be pretty cheeky to have such an expectation despite having failed — in the year he was Premier — to attempt a reversal of at least some of the worse decisions of his predecessors. Having displayed no contrition for his errors, no acknowledgment of the dreadful governance record of successive Tory Administrations (of which he was a part), and having failed to show that he understands that he helped imperil the province, he — again — seeks the top job.

Who gets to make such godawful choices and have a second shot at being Premier?

Even if we forget his missteps and bad judgments — even if we forget, too, his embrace of "hope" as his single economic management tool (much as Dwight Ball is doing now) — are we to close our minds to such an incapacity to lead?

Against a disastrous short tenure, on what basis does Davis believe himself to still be the best choice as P.C Party Leader? Is popularity also to be knocked off the list of qualifications, along with suitability?

“Landslide Davis” is a term only Mark Critch would invoke — and then only for a laugh.

Davis won the Tory leadership by a single vote. The same Paul Davis, as Premier, led the P.C. Party to resounding defeat, returning only 7 Seats in a 40 Seat Legislature — the worst result since 1966!

Mark Quinn of CBC reported recently that, “Paul Davis thinks the unpopularity of the Liberals presents a chance for him to become premier again”. Davis was not boasting of his personal popularity — a measly 35%, according to CRA, a polling agency. He merely sees himself as having become advantaged by a Liberal Premier whose sub-basement approval rating is a dreadful 18%.

The public now knows that Dwight Ball passes no litmus test for either good public policy or political enlightenment.  His failure to lead in a crisis likely guarantees that he will not survive a full term.

Yet, we have to suffer the nightmare scenario: Paul Davis as an alternative to Ball.  Because he fits the bill? No. Only because he is more popular than the most unpopular Premier in Canada!

Would the P.C. Party allow such a travesty? It’s not as if Danny Williams has gone away or that the Party has ceased to be hijacked by special interests.

It will have another chance at the Annual General Meeting this month to prove otherwise. If Davis is the best the Tories have on offer, there is little more to be said. Given Muskrat and the fiscal circumstance they created, the Party may deserve to be consigned to the dustbin of history anyway.


But any further truck with Paul Davis would only cement its dim prospects.

There is one upside however.....comedians, like Mark Critch, have it soooo easy!
Posted by Des Sullivan at Monday, October 03, 2016