When Barnard Pennecon LP was asked to comment on a letter which a senior company executive wrote to Nalcor, blaming them for the Mud Lake flood, it denied that the letter reflected its official position on the issue.

On Monday, July 10, 2017 the Uncle Gnarley Blog released a series of quotations contained in the one-page letter from the North and South Dam contractor. The executive told Nalcor that had it exercised “reasonable diligence [it] could have prevented the blockade by properly managing the downstream flows.”

The flood triggered a gate blockade at the entrance to the project; protestors blamed Nalcor for the flooding.


Nalcor declared the protest a Force Majeure — an event beyond its control — putting claims for the cost of the delay in workers heading for the night shift out of reach of compensation from the company.

The allegations stated by Barnard Pennecon’s letter are these:

NTV pursued the matter with BPLP but the company’s response was to refute the letter’s contents. On the NTV Evening News reporter Michael Connors reported Pennecon, a member of the Partnership, telling the broadcaster:

BPLP's denial of its own assertions seems rather odd.
Pennecon did not actually deny that the letter was sent to Nalcor. That would have been difficult anyway, given that it was dated, contained a document registration number, and held the signature of a senior executive of the company.


In addition, Nalcor would have had to deny receiving the letter — which it did not.
Anyone familiar with the document control systems of both Nalcor and BPLP will be mindful of the rigid process — and the number of people — required to manage the vast amount of communications generated in the process of managing a $300-400 million contract.


Still, BPLP’s dispute with Nalcor having been outed, the company evidently did not want to be off-side with the crown corporation. Though the accusations were damning in their implication, BPLP nonetheless tried to put the genie back in the bottle.


The release of the letter represented a second chance for BPLP to align its corporate interests with those of the people of Mud Lake.

It passed on that opportunity.


Many companies adhere to a code of corporate social responsibility, requiring them to make decisions having significant moral or ethical implications in favour of the interests of the larger community or society.

The flooding that led to the evacuation of Mud Lake caused enormous inconvenience and cost for the residents. In such a circumstance, a company like BPLP, having significant knowledge of the cause of the event and Nalcor’s role in it, might have been expected to make its private concerns public. It could have shared with the community the data and expertise that gave rise to the unfettered, even categorical, position that Nalcor was the culprit in the fiasco.

It is one thing for Pennecon to say to NTV that “… we can confirm that the content and quotes… are not consistent with an official company statement…” but it is not an unreasonable expectation that the company might also say how it was misrepresented by this Blog, or even if BPLP had altered its own claims.


As for the second part of the Pennecon statement which read “[the quotes] do not accurately reflect BPLP’s position on the project,” the fact is that no statement — except with respect to the Mud Lake flood — was attributed to BPLP in the Blog Post.

Such misrepresentations by private entities gives profit a bad name.


As to the matter of a company’s corporate social responsibility, Pennecon ought to have had more on offer than obfuscation. Local knowledge should contain deference to community, too. In Barnard’s case, perhaps locals shouldn’t even ask why registration to ISO 26000, or any other global standard for social responsibility, is a blank slate on the company’s web site.

In the pursuit of complete transparency, I have chosen to publish the full text of the BPLP letter. This Blog places a high value on accuracy. The public may wish to parse its contents and compare them with the quotes contained in last Monday’s Post. If they are “not consistent”, as BPLP suggests — if I have erred — then this Blog will acknowledge the same. 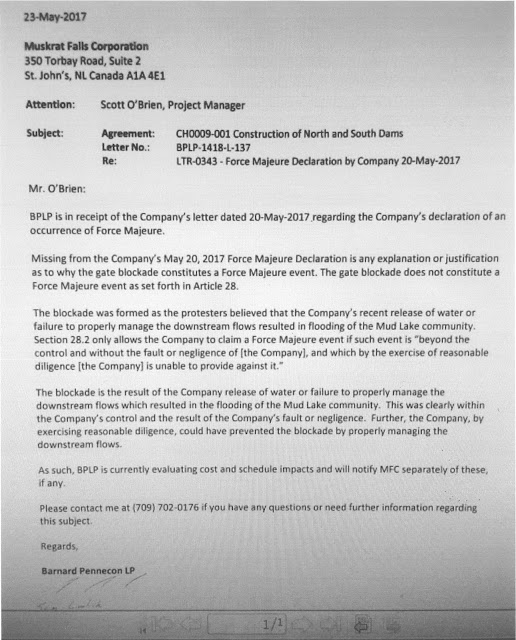