PUBLIC SHOULD BE AFRAID OF POSSIBLE CORRUPTION

SNC-Lavalin was responsible from the start in devising the financing strategies and engineering design for development of the Muskrat Falls project. When such a company throws down the gauntlet to its employer, Nalcor — detailing incompetence, a lack of technical and logistical readiness, and recklessness — and neither Nalcor nor the Provincial Government performs their duty and investigates, it is time for the public to step in.

Describe it as one might, but the public interest is under attack on an unprecedented scale.
The evidence, detailed in a 2013 Risk Assessment Report — only now brought to light by CEO Stan Marshall — illuminates a Government seemingly incapable of responding to the allegations against its own crown corporation. Those accusations, by any standard, constitute the worst crisis that has faced a public sector agency since Confederation.

Even if the ‘Anonymous Engineer’ had never come forward with his story of “low-balled” or “falsified” estimates, the SNC Risk Assessment Report ought to have triggered an expression of horror so great that the Minister of Justice would have been directed to immediately call the Chief Justice in pursuit of a Judicial Inquiry. 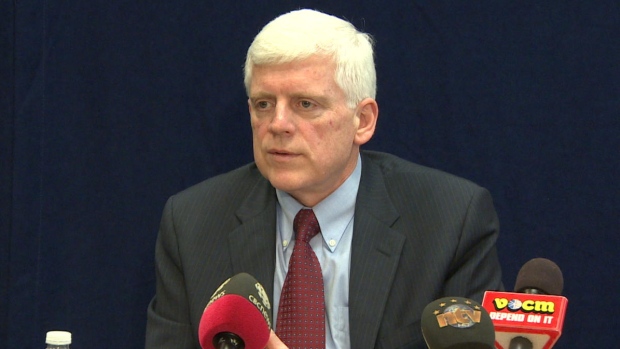 It is not my purpose to pillory a timid government. As the premier has failed to act with a response proportional to the allegations levelled at Nalcor, the only plausible next step is to get the attention of the public.


The seriousness of what SNC-Lavalin has reported needs focus and context. Those responsible need to be exposed.
SNC-Lavalin is an important player in this issue. It was the firm that designed the financing structure and the basic engineering plan for the Muskrat Falls project.


The SNC Report identified no fewer than 40 risks (aka serious defects) to the project’s finances and schedule. Nine of them are major, having life safety and cost implications in the billions. The project is in desperate trouble, experiencing egregious cost overruns and schedule delays. And virtually all the issues causing this trouble were detailed in the April 2013 SNC-Lavalin Report, at a time when it was still relatively painless to stop the project.


I repeat: the SNC Report foretold grave consequences if it was allowed to proceed. It details the very specific issues which prevented a successful outcome.


The Report was kept hidden from the public — and possibly from the Government too (we don’t know) — when it contained the basis for a more prudent course of decision-making, allowing the project to be shelved or, at least, delayed.


Though some have panned the Report as the work of a company protecting itself from possible future litigation, its contents warrant not dismissal but confirmation and investigation.


SNC-Lavalin is a major international engineering and construction company. It had a relationship with Nalcor and the project which was not shared by any other company. Notwithstanding its tarnished image, it has plenty of megaproject experience and expertise.


When SNC-Lavalin comes forward, not as a consultant but as a whistleblower, only the foolhardy will ignore their claims — unless, that is, there is another motivation.


The wait for sanction hinged, the public was told, not on whether Nalcor was ready to proceed, but only on the grant of the Federal Loan Guarantee.


Contracts were immediately let. Billions of dollars of public money was committed. The haste was such that Nalcor had not even finalized the deal with Emera for the sale of "surplus" power, the NS UARB having demanded a sweetener to the free 20% of MF power that constitutes the NS Block.


The date of the SNC Risk Assessment Report is April 2013. That is barely four months after sanction (December 17, 2012).


While someone should eventually require SNC Lavalin to divulge under oath the details of how the Report was given to Ed Martin, such minutiae is irrelevant when considered against the sheer magnitude of what it alleges.


This is a report that paints Nalcor as unfit, as much as unprepared, to undertake a project of such enormous size, cost, and challenge.


The sheer scope of the risk analysis is underscored by SNC’s assessment not only of Nalcor’s lack of management readiness (the management team was more familiar, it noted, with the oil and gas industry than with heavy civil and hydro works) but also of inadequate engineering on critical factors, greatly underestimated labour requirements (aka costs), limited availability of competent contractors, and other issues. Indeed, the recklessness of the decision to proceed with sanction anyway can only be evaluated in the context of SNC’s specific claims.


Let’s look at those which the Report defines as the largest risks.


Consider this statement on page 6:

More specifically, the largest risks are these:


(1) Failure to do adequate geotechnical investigations on the stability of the North Spur — a potential show stopper — demonstrating a cavalier attitude to project completion, operation and downstream safety.


(2) NO geotechnical investigations in the riverbed under the footprint of the dam and coffer dam; SNC emphasises that adverse conditions could be discovered during construction leading to major rework, cost overruns and delays; at the upper end, this could rise to impractical to complete.


(3) Failure to do supporting engineering on the coffer dam that could lead to catastrophic failure causing injuries/fatalities and loss of equipment.


(4) Restricted pool of major contractors… The project will face multiple problems with the large EPC (engineering, procurement, construction) contractors who would hold the project's budget and schedule hostage…


(5) Gross underestimation of labour requirements (Nalcor was then using 1500 workers when SNC said 2500 were needed); a sure sign of cost low-balling to gain sanction. This, in SNC's eyes, was reflected in the unavailability of sufficient camp accommodations… which could lead to mobilization and start-up delays… resulting in claims and ultimately project schedule delays.


6) A significant portion of the local labour market was working in Western Canada… workers are inexperienced… Unavailability of… manpower may lead to schedule delays and extra labour costs, as well as impacting on the quality of the work.


7) Due to the heated market conditions in the transmission lines market (currently the case in Alberta; LCP Is dealing with the same bidders) and the size of the construction packages, fewer bids could be submitted and at higher than budgeted cost. Also, very few of these major contractors will be able to perform these large packages in the proposed time frame.


8) Major components, such as turbines and gates, will be procured and manufactured in China. Based on SLI (system logistics integration) and past experiences, quality, performance, warranty, service and schedule problems can be anticipated…


9) Powerhouse and spillway concrete works are planned on a three year duration (two winter seasons) with a very tight and aggressive schedule… which might result In additional delays… and costs.


10) As the start-up of the spillway, river closure and river diversion are to be fulfilled during an "ice-free" window. There is no float in the schedule with the preceding activities… any delay in these previous activities may trigger missing the diversion window... in the project schedule. This actually happened, with river diversion in October 2016 missing the May 2015 target by 18 months.


The Report adds: SNC-Lavalin, as the Projects E.P.C.M. has the legal obligation to advise its client of any risks that will cause prejudice to the project and which deviates significantly from its budget and schedule. Our concern is we foresee that the project will incur more than a 30% cost overrun if the project does not take action on the risk elements raised in the Risk Assessment Report. The actual project structure is contributing to this increasing risk factor. Client has limited experience in huge civil work and earth-filled dam work, power line and power station works. 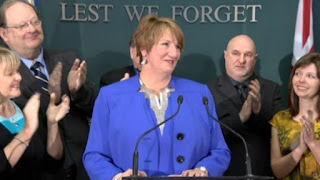 When a major engineering and construction company like SNC — Nalcor’s major consultant — gives so many warnings that, in their scope and implications, even one or two would constitute a “show-stopper” for the Muskrat Falls project, the public has the right to be concerned — very concerned.


For Nalcor to have proceeded anyway without, at minimum, pausing and taking a variety actions to confirm the feasibility of proceeding — though stopping it altogether should have seemed the safest and most appropriate step — is not just mind boggling.
It demands an assessment of what was really motivating senior management — what the driving force was that disallowed a delay.


Ed Martin has denied seeing the Report. His suggestion is that all the risks it contained were accounted for by Nalcor, anyway, cannot be believed. The record of the project simply does not 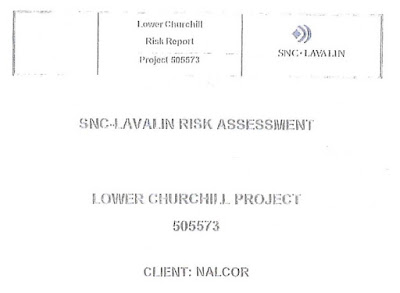 bear out his assertion. Indeed, the Report forecasts virtually every problem the project has actually experienced.


Outstanding, of course, is arrival of and commissioning of those Chinese-made turbines. Will they have serious defects like the transmission lines?


Let’s be clear (and SNC-Lavalin should not be surprised by this comment): we have many questions for that company and want it to explain its involvement in this project, its relationship in the early years of concept development at the political level, and the role played in it by disgraced SNC officials like Duhaime and Ben Aissa. 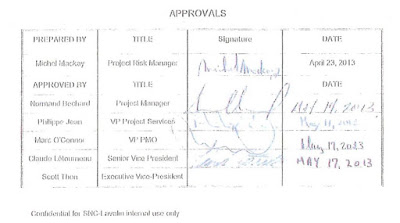 SNC will not be surprised that any Forensic Audit, of necessity, will begin in 2006 and work forward.


When a society is threatened, in consequence of this single project, all the hands that touched it will need to publicly face up to their role.


That Nalcor sought sanction based upon “falsified”, “low-balled”, “absurdly low” estimates — choose what words you wish — has entered into the realm of fact.


That Nalcor sought sanction, having possibly jigged other critical data and having entered into highly questionable arrangements with Emera, is also on the table.


But the SNC-Lavalin Report wasn’t about deceit and falsity. It chronicles unpreparedness, incompetence and recklessness.


The Report was hidden from the public.


We don’t know if it was given to the then-Premier and her Minister of Natural Resources. But we need to.


The enormity of the breach of faith — of trust — that occurred at Nalor, as chronicled by both the Anonymous Engineer and SNC-Lavalin, can’t be dismissed as a mere “boondoggle”.


That term is too trite, incomplete and unsatisfactory.


It does not capture the possibility of malfeasance or corruption. It does not do justice to even the most minimal demand for accountability or transparency in a matter of public interest. It gives mere political taint to a group who may, in fact, be guilty of matters criminal.


In short, it does not do justice… to the need for justice.


And the Premier’s suggestion that a Forensic Audit or other inquiry can wait bears a striking resemblance to how Nalcor treated SNC’s Risk Assessment.


The time to draw a line in the sand on deceit and on possible corruption in government has long passed. This Premier should not be one with his recent predecessors in deep-sixing the public interest.


The public needs to inform him that he will continue do so at his peril.
Posted by Des Sullivan at Monday, July 03, 2017