My recent Uncle Gnarley posts have dealt with Emera and Civil Deceit (May 15)
SNC Lavalin and Criminal Deceit ( September 14)
and the risk of catastrophic failure of the hillside above the North Spur (September 28)
They are all connected; all part of the grand scheme.
That September 28th post more or less described the time bomb that Nalcor has constructed at the North Spur.
Today I’d like to go back to look at some of the design steps that got them there.
For background, the keeners amongst you can check out a long but well illustrated powerpoint on the North Spur issue on my muskratinfowebsite –
Please restrain yourself until you are through reading this present much shorter Uncle Gnarley piece.
The real keeners can also afterwards move on to an even longer powerpoint on the same site at http://muskratinfo.ca/northspur2.pdf

And the true fanatics should definitely check out my report on Dr Bernander’s North Spur field trip –
https://www.scribd.com/document/274441926/Report-by-Cabot-Martin-based-upon-Dr-Stig-Bernander-s-Fiels-Trip-to-assess-Quick-Clay-Stability-Problem-North-Spur-Muskrat-Falls-Labrador
Now that’s a scary one – especially if you remember the Rissa Slide video from my last post. On the trip by foot, boat and helicopter, we saw Quick Clay and Quick Clay landslides up and down the Lower Churchill Valley - all over the place in fact.
Dr Bernander was amazed – most “active” ground he has seen anywhere except for Saudi sand hills in a rare violent rainstorm.
The helicopter shots of the 2010 Edwards Island Quick Clay Slide alone will, I assure you, rock your socks (see slides 79 to 87)  - yes it’s long but hang on, it’s only pictures for God’s sake.
Slow down and smell the putrid carcass that is Muskrat – lest it be us.
So there, I’ve plugged everything except my spring 2014 book “Muskrat Madness” – still available for a pittance at Afterwords Bookstore on Duckworth Street.
But all that is for the keeners – back to the Coles Notes.
++++++++++++++++++++++
Best place to start for these purposes is back in the spring of 2011.
Nalcor was under heavy duty fire from the Geological Survey of Canada (GSC) which had been picked by the Federal Provincial Joint Review Panel as their prime geotechnical advisers.
The GSC peppered Nalcor with a series of focused written questions requiring written answers about Nalcor’s inadequate geotechnical information and lack of real review of North Spur geology in particular.
Had lots of questions Nalcor wouldn’t or couldn’t answer.
In apparent exasperation, on March 9, 2011, the GSC gave an impressive presentation at a Federal Provincial Joint Review Panel public hearing in Happy Valley/Goose Bay.
They pointed out a lot of technical gaps and their worries in vivid detail. Said Nalcor’s work was inadequate. Even gave the Rissa presentation in point form.
Word was Ottawa grew “concerned”; the reaction in the Confederation Building  must have absolutely smoked and Danny – well you know Danny.
And the Nalcor reaction?
“What me worry?” was the battle cry. What could possibly turn up that great big globs of ratepayers/taxpayers money could not fix?
On with the party. Get her started.
Within the month, the chastened GSC was saying that Nalcor’s bland reassurances were fine with them; true there were those unanswered questions but what the hell – in fact everything was fine. The lion had regressed to pussy cat.
Now one of Nalcor’s key assurances to the GSC was that they would be doing this super-duper North Spur geotechnical program and they were confident that everything would turn out fine.
Behind the scenes Nalcor was trying to get the Provincial Government to sanction the Muskrat Falls project by June of 2012 – before the promised North Spur geotechnical program was to be conducted in the summer of 2012.
But something went wrong – someone must have said - Hang on we are not ready to sanction; we have to put sanction off till at least the Fall – and it was.
And suddenly, the wonderful Nalcor geotechnical program promised to the GSC and to the Joint Review Panel for the summer of 2012 was moved to the summer of 2013 – which of course turned out to be after sanction in December 2012.
And surprise, surprise, after even the decidedly inadequate 2013 summer geotechnical program , it was found that the sanctioned “stabilization” plan, touted as safe at sanction, would not work because the North Spur would still be too unstable.
No sir, we need to do more Nalcor said– but don’t worry – this time we’ll get it right - if we just add a couple of cut-off walls everything will be ok – and the party can go on.
The fact that they then had and still have a very inadequate number of core holes and resulting data on the Spur – didn’t matter.
The fact that there are many square kilometers of Quick Clay infested area upslope from the Spur where Nalcor does not have a single drill hole – didn’t matter.
The fact that every summer the Department of Highways has to clean out the slumping clay from the Trans Labrador Highway ditches up above the North Spur --- didn’t matter -- even though as one highway worker said – “Sure this whole hill side is moving.”
The fact that they have torn up and shifted vast amounts of ground without any apparent concern that they are setting up an Oso slide situation – didn’t matter.
All that mattered, and still matters, is that the party must go on.
Ah yes – a Big Scheme is made up of many smaller schemes – and this has been one of them.
Of course, all this goes to show how complex the Judicial Inquiry’s work will be.
And that it must include answering the question -- Were proper geo-technical, engineering and project management procedures followed on the North Spur?
Yes, the Judicial Inquiry will be busy, busy, busy.
PS:  Just one more thing –
In my last post I used the deadly 2014 Oso slide in Washington State to demonstrate how a two stage slide initiated upslope from the North Spur could set in motion a Downhill Progressive Slide that would literally wipe out the North Spur and bury the existing construction site.
This sort of event is apart from a breach in the North Spur first (say from increased hydraulic pressure from raised water levels). Such an event would itself bring down the unstable upslope area.
This is a case where the small may well begat the big -- just like those few loads of fill from a barn basement triggered the 1978 Rissa slide in Norway.
Nalcor has been shifting sand, gravel and clay around upslope from the North Spur like there was no tomorrow.
Here are a few recent photos of one of their hillside workings along the North Spur access road. 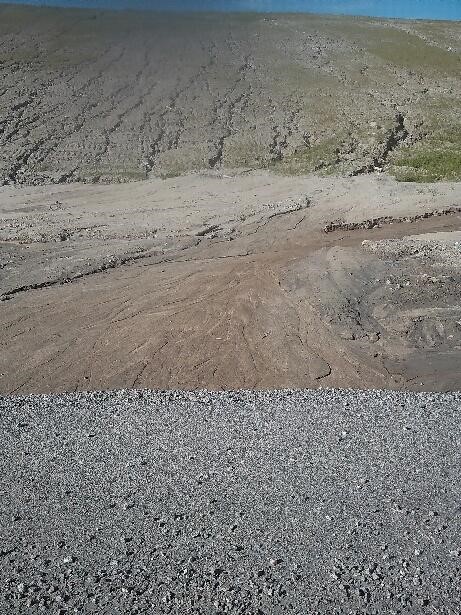 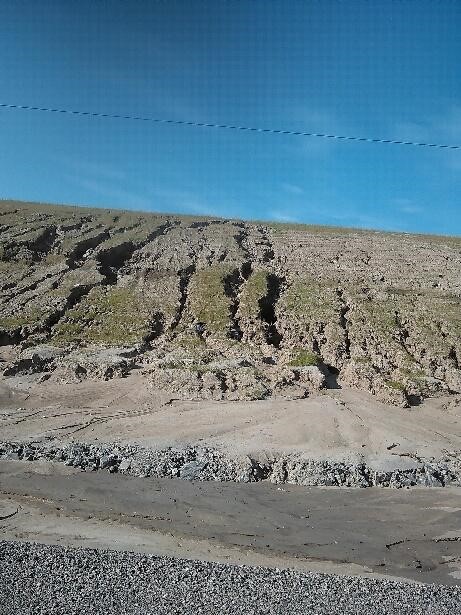 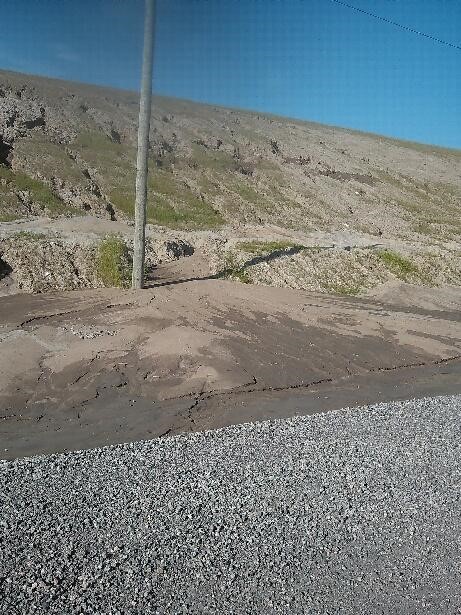 It is plain if you blow up the photos that this particular part of the slope is literally ripping itself apart – in the last photo the fissures in the foreground extend intermittently all the way to the top of the slope.


This ordinary looking hillside could be an Oso type trigger if it lets go.
Of course, the contractors and workers are beavering away and don’t look at it that way.
Is this blindness some sort of socio-political fatalism that nothing can change?
Does anyone really put any faith in Nalcor’s mantra (included in instructions to the so-called Independent Engineer) that Progressive Downhill Landslides like the ones Dr. Bernander worries so much about simply do not – cannot- exist in the Churchill River Valley.
After a detailed examination by helicopter, Dr Bernander said the 2010 Edwards Island Quick Clay slide upriver was a “classic” example of a Downhill Progressive Landslide – but what would he know, he is just the world’s leading expert in the field.
Is this failure to own up to the North Spur problem just another part of our general Muskrat fever?
If so, what could shake us out of it – what could be our “The Emperor has no clothes” moment?
Maybe when the Inquiry brings out more and more areas of defect – like when we all notice that all of Nalcor’s Dam Break studies for Muskrat are for summertime conditions only; river ice is not taken into account.
That’s right - like Downhill Progressive Landslides, Nalcor doesn’t believe in river ice -- & what it can do downstream once in motion -- either.
Poor Happy Valley/Goose Bay and Mud Lake.
Poor all of us.
Posted by Des Sullivan at Thursday, October 05, 2017