WILL PREMIER ASSUAGE ONE PERSON'S WORRIES ABOUT PUBLIC INQUIRY?

The Premier’s announcement that he will reverse course and call a public inquiry into the Muskrat Falls project has attracted much comment on this Blog and in other forums. The public’s worst fear is that the inquiry will accomplish little and result in another waste of money.

Scepticism abounds that government will restrict the inquiry’s mandate.
Nalcor meddling is an undercurrent of the debate. Another is that the government will placate the many politicians and restrict the inquiry from having them testify and face examination.
Only the Premier can quell those fears with announcement of the broadest possible inquiry mandate.
An Anonymous commentator enumerated eight reasons as to why the inquiry might be ineffective in response to a piece on this Blog entitled Nalcor Meddling A Threat To Muskrat Inquiry.

(Cabot Martin also wrote a Piece called Inquiry Needs Engineering Capability to "Uncloak Big Scheme Comprising Many Smaller Schemes". David Vardy will write, on Monday, his views as to how the terms of reference should be constructed.)
The fifth reason cited by the Anonymous commentator expressed doubt that any of the $12.7 billion,  the estimated cost of Muskrat, will be returned. Such a doubt could easily be said to be a guarantee. I suggest, however, that particular concern may constitute a measure of overreach but others are far more legitimate and reasonable.
Within just a few years the bills will go out to ratepayers. Those high rates and the subsidies (aka “rate mitigation”) required to repay the capital borrowed and the operating expenses of the project will have adverse consequences for public policy of all kinds, especially public services.
Public outcry will translate into a demand to know how such a debacle could have occurred, how so many people could have been duped, who is responsible and if punishment is warranted.
Those answers will need to be ready especially  if the pain of the debt is borne solely by members of the public. Is there another volunteer?
Exactly because the opportunity afforded by a public inquiry should not be wasted, readers might want to consider this one commentator’s reservations. Indeed, as another reader who gave the commentary particular note suggested: “all (Premier) Ball has to do is turn those negatives into positives”.
Here is the Anonymous writer's commentary:
"First of all let me say this inquiry will be a waste of money because of the following:

1. There will not be any criminal charges laid.
2. The inquiry will not have the power to force people such as Williams, Dunderdale,
Kennedy and Marshal to answer questions.
3. Ed martin will not answer to this inquiry and neither will Stan Marshall.
4. There will not be a forensic audit to determine where all the money went.
5. None of the money will be paid back.
6. Such things as contracts and contract workers will hide behind the confidentiality   laws-
laws that will not be changed to once and for all prevent this type of secrecy from
preventing governments releasing information to ensure a much needed democratic, free
and open process will be in place for the future projects.
7. The province is already on the hook for the $12.7 Billion owed due to this project so
nothing is going to change that.
8. In order for to prevent this Boondoggle from repeating itself in the future the
system of government has to change and that isn’t going to happen while we have three
parties with vested interests in more projects, more spending and more high priced
construction jobs to elect them in the future."

Perhaps readers share some of this commentator's  concerns. Perhaps you should tell the Premier now. After he releases the Inquiry's terms of reference it will be too late.

Not sure how you can contact the Premier's Office? Here is the info: 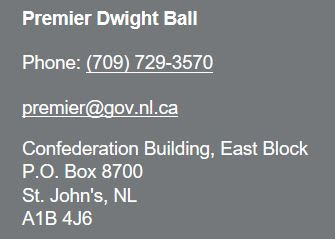