PREMIER SHOULD TELL BEOTHUCK ENERGY TO GO ‘FLY A KITE’

If you live in Newfoundland, you know all about wind.  There’s the natural kind… and then there’s the wind that keeps carpetbaggers aloft until the easy money disappears.


“If you got the juice we got the use,” Kathy Dunderdale was fond of quoting the New England Governors, the cost of producing the power never entering the equation.
"Even if we produce everything we have here at Muskrat Falls and Gull Island, we still wouldn't fit all the energy demands south of the border," the CBC quoted Kirby Mercer in a story posted back in June.
Mercer is the spokesperson for Beothuck Energy’s proposed wind power project in St. George’s Bay.
Like Dunderdale, economics seems not to matter to him either. 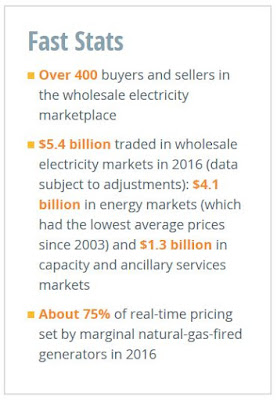 It is true that the American appetite for power — especially the clean variety — is significant. But the same latitude does not hold for the price that American consumers are willing to pay for carbon-free electricity.
ISO New England is the body that administers the wholesale electrical market in that region. The group holds daily auctions to ensure it gets the lowest possible wholesale price from competing power producers.
Last year, according to statistics released, the price per kWh went below two cents and achieved a high of less than ten cents. The average price of electricity purchased by ISO New England in 2016 was approximately 2.8 cents per kWh - the lowest since 2003 (see "Fast Facts" exhibit on left).
Mild winter temperatures contributed to lower demand by 29% compared with 2015. But even in that year, electricity prices were higher by an average of only 1.2 cents per kWh.   (Source: ISO New England 2016 Annual Markets Report) And those numbers are not net to the producer. Transmission (wheeling) fees, management and operating expenses further diminish the returns to the electricity sellers.That is one issue. Another is that the overall value of the New England market has been in decline at least since 2008 evidenced by the Exhibit below. Either way you cut it  gross revenues of 2.8 - 4.0 cents per kWh won't even nearly pay for Beothuck's proposed wind farm. Put differently, the project won't materialize in the absence of major subsidy. The 685 megawatt carbon-free Pilgrim nuclear plant near Boston is slated to close in 2019. New York will lose two reactors — and two gigawatts — at Indian Point between 2020 and 2021.
Hydro Quebec (HQ) is already a huge player in that market, but it isn’t the only one. According to a recent article in the Globe and Mail, Massachusetts evaluators “are picking through bids… from 40 companies other than Hydro Quebec” and New York has “received more than 200 proposals for auctions to meet a state goal of sourcing 50 per cent of its power from clean sources by 2030.”
With prices and competition like that, and the acknowledgement that intermittent wind needs mixing with a more stable source like hydro, the green-field Beothuck project will be left sucking wind without major subsidy and a power purchase agreement.
As much as many American states want to fight climate change, few are willing to ignore “destructive” hydro in favour of alternatives. "We would ideally like to see wind and solar replace Indian Point," the Globe and Mail quoted Robert Freudenberg, a vice president for energy and environment at the Regional Plan Association, an urban research and advocacy group. "But we're not naive enough to think that we can get there that quickly."
It seems that many on the west coast of this province didn’t get the memo.
Here at home, Nalcor refuses to acknowledge the basic economic principle of elasticity of demand, even as the government ponders 17 cents per kWh — and a subsidy of at least another half a billion dollars annually for 50 years, after 2020-21, to fund Muskrat. (See Muskrat Subsidies Will Cause Gov't Debt Spiral). Unlike Nalcor, ISO New England is unconcerned about legacy; its mandate is customer satisfaction. The Exhibit (below) confirms who is saddled with power generation risk and it isn't the ratepayer.
__________________________________________________________
_ 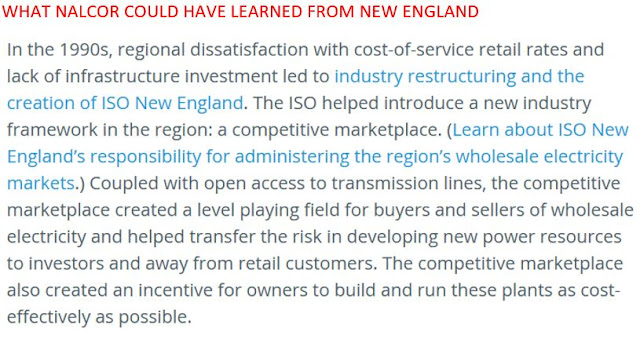 Not just Nalcor but the public, too, are unable to conceive notions of surplus and of selling power at a fraction of what it costs to produce.
Seemingly, cost be damned. Communities on the west coast region, bolstered by Corner Brook, just want their own boondoggle.
People are truly willing to sacrifice their children’s future on the pretext of inter-generational equity (that’s the scheme with which Nalcor justifies repayment of unsustainable debt to be kicked down the road). The Corner Brook Board of Trade is even prepared to up the ante — which brings us back to the subject of Beothuck Energy’s wind project. 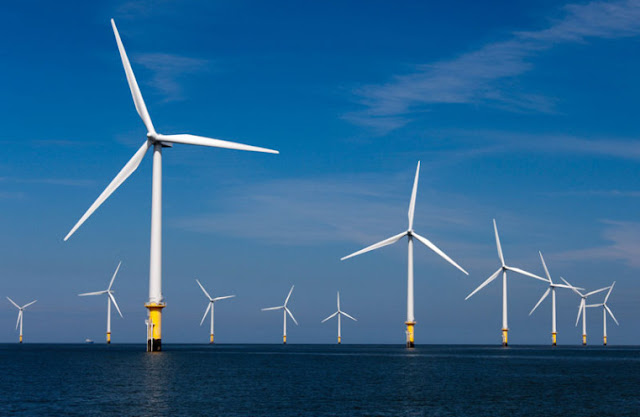 In August, five west coast Mayors put out a Press Release asking a penniless provincial government “to get on board.”
What did they mean?


In the Release, the Mayors acknowledged “… the enormous opportunity [represented by the Beothuck proposal] to establish a wind mill fabrication facility in the Port of Corner Brook which could see up to 600 new jobs created in the area.”
This blogger set out to scour every Press Release reported by the media looking for three magic words as to why Beothuck might relentlessly pursue the development. It turns out that the words were easy to find.


They are “Power Purchase Agreement”, of course.
The Press Release stated: “The Mayors agreed that it is essential to work with the Province of Newfoundland to secure a power purchase agreement for this project to ensure that we have first player advantage…” (bold added).

Giving Beothuck that “power purchase agreement” is, in fact, what the Mayors mean by getting “on board”.


Those community leaders, ostensibly, were echoing Beothuck’s spokesperson, Kirby Mercer. Mercer told the Western Star:  “I think it's going to be awful hard for the government to say no to this opportunity, because if we don't take it, it's going to happen somewhere else in Atlantic Canada.”
Ah… first player advantage… someone else might get the prize… if we don’t dive into the deep end first. Kirby might have been practising Danny Williams’ script: ‘let’s screw ourselves in order to screw Quebec.’


What is a Power Purchase Agreement (PPA)?
It is a “take or pay” agreement under which the Province (in this case) is expected to guarantee the purchase/sale of the power — at a pre-determined price. It is the deal that shifts the risk of financial loss from the developer to the Government.
The Dunderdale Government imposed just such a “PPA” on NL Hydro allowing for the return of capital, interest and dividends in order to secure the Federal Loan Guarantee for the Muskrat Falls project. In case you have forgotten, that PPA requires that you pay 100% of the costs of Muskrat for only 40% of the power — most of which won’t be needed anyway.
It’s a developer’s dream; a veritable guarantee of a continued stream of profit over the entire duration of the contract (except, of course, if it is beyond the government's fiscal capacity).
The only part of the promise that the public usually hears is ‘short-term construction jobs.’
Camouflage is provided under the guise of “first player advantage.” The role of community support is to stampede the government into another foolish decision under the threat that several other ostensibly foolish governments in Atlantic Canada will jump ahead of us.
The municipal minds behind Corner Brook, Burgeo, Deer Lake, Stephenville and Port Aux Basques seem not to mind being used, perhaps wittingly, as pawns in the scheme.


I’m betting there’s a Mayor Ball out there somewhere!

There are more than a few contractors in Deer Lake salivating at the very thought of even a mini-Muskrat.
And, evidently, Beothuck Energy won’t be satisfied with just a PPA. It wants icing on the cake… and a cherry on top.
The Mayors said that they want the provincial government, the Port Corporation and Beothuck Energy “to map out a collective pro-active plan to secure the opportunity from this investment.”
In late July, the Greater Corner Brook Board of Trade even hosted a luncheon so that speakers from the Port Authority and Memorial University’s Grenfell Campus could discuss “the potential economic impact of developing the industry.”
According to the Western Star newspaper the port corporation’s business development manager told the Board that “the port is positioning itself to possibly do an infill of the Brakes Cove area to create enough land to house a facility to construct gravity-based structures for Beothuk’s wind turbines.”
Wait! There’s more.
Beothuck has to get its wind power to the U.S. market.
On June 13, 2017 the CBC reported Beothuck’s strategy:
“That's designed really to fit within the Newfoundland grid system and to be able to export via the Maritime Link… There's excess capacity on that link and we plan to fill it with offshore wind,” the broadcaster quoted Kirby Mercer.
Mr. Mercer did not say how much, if anything, his company was prepared to pay or how much room there might be on the 500 MW line. Not even Nalcor has that answer — the crown corporation having forgotten to ask the good Dr. Wade Locke if demand elasticity also applies to power, he having omitted the thorny subject from his own boosterism.
All interesting stuff… and what’s really strange is that, after being kicked around for years, the Ball Government still hasn’t told Beothuck Energy to go fly a kite.


Perhaps, as some have suggested, there are some powerful people who want a share of the spoils.
With a billion dollars on offer — and possibly a PPA, too — more than likely the five west coast Mayors aren’t the only windbags keeping keep this project aloft.
Posted by Des Sullivan at Monday, October 23, 2017