The Grand River Keepers (GRK) and the Labrador Land Protectors (LLP) have constituted Labrador's most steadfast opposition to the Muskrat Falls project. Though relatively small in number they have had an out-sized influence on public awareness in Labrador and throughout the province.

Rarely enjoying the unequivocal support of formal aboriginal government or town councils, the issues with which they have grappled – methylmercury and concerns regarding public safety, like the North Spur stability problem - they have advanced rational public policy themes which are important to every citizen.
Their support has come from individual aboriginals and non-aboriginal people alike; individuals who have often felt that the Native Groups and the Town Councils, including the one in Happy Valley-Goose Bay, have been far too willing to take Nalcor’s strings-attached largesse in return for deference and for keeping quiet.

With little funding, the GRK has attempted intervention at the PUB and been rejected. They have campaigned for notice of environmental and other issues across Canada and the U.S. Both the GRK and LLP have written briefs to governments, and have frequently intervened (unsuccessfully) with their Labrador MHAs and Cabinet Ministers. 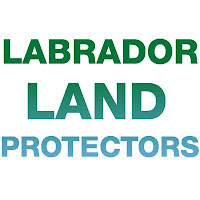 If not support, the GRK-LLP have certainly earned the respect of a great many people within Labrador and without. They are an inspiration to those who are fed up with deaf governments, those concerned about eroding institutions and those determined to speak truth to power.
That is why today’s Post offers a Link to the LLP-GRK’s Submissionto the Commission of Inquiry into the Muskrat Falls project. Once again, they have strained their resources in the determined effort to be heard.
The Uncle Gnarley Blog is not a platform for any particular group but it is a platform for all groups when an unfiltered loudspeaker is needed to warn and to influence change. It is here to tell the public when their political leadership has allowed the values and the principles of the many to be undermined by the interests of the few.
Posted by Des Sullivan at Thursday, March 08, 2018