If new Tory leader Ches Crosbie had hoped to wear the moniker “Landslide” after last weekend’s vote, the Party had no qualms denying him any such expression of unanimity.

The contest was a straight two-way leadership race. With Crosbie winning 57% of the vote against 43% for Tony Wakeham, according to the media, the outcome was respectable but hardly overwhelming.

Wakeham came into the race late and with a communications plan that didn’t include the general public. He exhibited little knowledge of public policy issues, too.

In contrast, Crosbie demonstrated preparedness and a willingness to engage people on the ground and on social media. His legal experience shone through the process; his speech was thoughtful and careful. 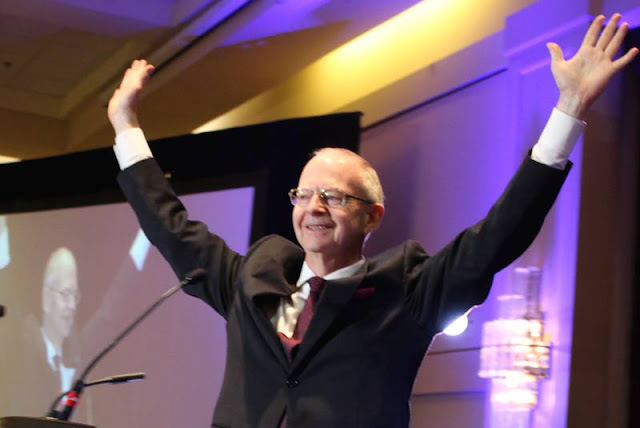 To say that he is not the most exciting politician is an understatement but Crosbie, like his father in the early days of his political career, probably knows he will have to find another reason to convince people why they should like him.

It is not unkind to suggest that, in the excitement department, Dwight Ball has already done much of the heavy lifting; ennui follows either of them onto the stage.

Crosbie’s timing may be fortuitous if only because the public is — or ought to be — tired of the cult of personality fomented by former Premier Danny Willliams. His self-styled Chavismo, noteworthy for its absence of humour, humility, fiscal responsibility, notions of governance or even common sense, is thought in some circles to have set the P.C. Party back, possibly for decades.

Following the Tory-created Muskrat debacle, the public may be ready to dissociate from populists and their jingoistic rants. The next Premier who takes down a flag, or wraps himself in it, might just have to fly from the mast too.

Even if the Liberals have been weak to the point of stupidity, their strategy of suppressing the long-term economic and social consequences of our fiscal position, with Muskrat layered on for good measure, does not negate legitimate questions as to how we have arrived in such a precarious spot.

Crosbie must address how a Party that was once a model for Canada as a force for institutional development in the 70s and 80s could have seen those same institutions crushed or circumvented during the last decade.

And, with respect to Muskrat, it won’t be enough for Crosbie to say: it’s not my fault, I wasn’t there. Crosbie leads the Party that ordained and facilitated the policy decisions that presaged the debacle. It drags on him like a millstone.

Mr. Crosbie can also say that his only job is the constitutional role of opposition to the Government.  But, given the magnitude of the disaster that describes the Party’s decade in power, that approach won’t wash either — especially as the public gets a better handle on the full extent of the crisis and how the Liberals have inexplicably hidden its overall consequences.

In short, it will fall to Crosbie to figure out the words that will herald a new era of integrity in the Party and that get the public to buy in.

Admittedly, Ball's handling of the "bullying" affair helps give the Tories an easy road but discounting another year and a half of amateur hour, we might ask in reference to Mr. Crosbie's mandate: can a political party corrupted by special interests be reborn?

Not easily, for sure. But if it is possible, it is only because our culturally-entrenched two-party system abets forgiveness or denial of corruption and deceit when performed by partisans on behalf of the tribe.

For that reason alone, our party system can’t be divorced from those who define our political values. The outcome of an election, after all, is also a commentary on the body politic, who barely participate — some not at all — but who expect miracles from the process and will slate it when it doesn’t deliver. On this account, the public has some soul-searching to do. The process might achieve greater clarity if a leader emerges who can help identify what needs fixing. Is that person Ches Crosbie?

Certainly he has won himself a big spring-cleaning job which includes decisions both urgent and tricky.

It is only natural, following a leadership contest in which factions and divisions are exposed, that a new leader will want to pursue a course of healing and unification. Except Crosbie doesn’t have that luxury.

Crosbie did not have the support of the majority of the current Tory Caucus. At least four if not five of the seven-member Opposition, including Paul Davis, supported Wakeham — the latter thought to be alligned with former Premier and political meddler Danny Williams. The loyalty of most, but not all, of the Opposition’s support staff, too, is rated as doubtful.

The small size of the Tory Caucus is a huge limitation for Crosbie. He will have to decide whether, in spite of the lack of mutual trust, he should make nice with the Caucus anyway, until after the next general election. Does he appoint Paul Davis to be his voice during Question Period in the House of Assembly, knowing that his agenda and Davis’ are not a match? How could Davis possibly represent the change that Crosbie has spoken of, anyway?

If Crosbie plans to differentiate himself from Williams, Dunderdale, Marshall and Davis, who have brought the Party to the brink, he must manifest real change, not more of the fake variety. He must not only embrace a value system that is fundamentally different from theirs, but he needs to excise from the Party that very group whose arbitrariness, ego and stupidity inspired the harm done to the province.  Each represents dead weight, except only to the group whose patriotism is little more than a slogan of the St. John’s Board of Trade.

Crosbie needs to show that he means business. He should lay down markers early, lest he be risk becoming unseemly like his recent forbears.

That done, Crosbie needs to find some solid candidates to run in the next election.

It’s a hell of a job he has won. He will need more than a few breaks to succeed.

Unfortunately for him, his Party doesn’t deserve any.