Danny Williams' inability to address the issues raised in the Grant Thornton Forensic Audit or answer for why the Commission of Inquiry is unable to find any detailed analysis performed by his Administration on the Muskrat Falls project seems not to have inspired in himself even a moment of reflection. Rather, he returned to the Inquiry evidently for his pound of flesh as early critics, David Vardy and Ron Penney, sat in front of the Commissioner, too.
Williams could be seen lurking on the sidelines, the former Premier still hoping that some of his dignity might yet be salvaged. He was waiting for his brother, Tommy, to land a few body blows on Vardy and Penney. He left disappointed.
Observing Tommy brought to mind a well-known citation attributed to Napoleon, one I had hoped our legal counsel would be mindful of. A paraphrasing of the adage might read: never interrupt your adversary when he is in the process of self-destruction.
It was the Commissioner, however, who wisely intervened, perhaps saving Williams from himself. “I'm not too concerned about all the personalities involved,” said Judge LeBlanc adding, “I don't know what all the love-hate relationships are, and to be quite honest with you I don't really care about that.” 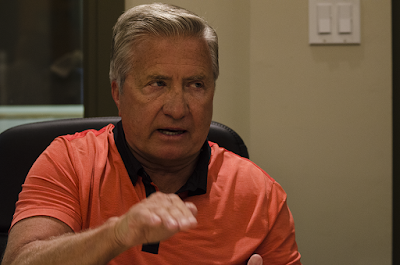 Tommy Williams, acting as legal counsel for his brother and other former NL Government officials, excluding Premier Dunderdale, was loudly complaining that Uncle Gnarley had not joined the Vardy/Penney Panel.
Strangely, moments later Danny was telling the media: “I'm suggesting that the credibility and the weight of the testimony of Mr. Vardy and Mr. Penney is basically insignificant.” The former Premier added: “They're not megaproject experts. They're not experts in anything that's really particularly relevant to this inquiry.”
It's tough for even Danny Williams to have it both ways.
Stepping back from the mayhem that the Williamses had engendered, it might be worth stating that every word I have ever uttered relating to Muskrat has appeared on this Blog. It is all in the public sphere. Vardy and Penney, on the other hand, have written significant interventions directly to the provincial and federal governments, and made submissions to the PUB during the DG2 reference. It made sense that the pair would have an opportunity to bring some of those, and the analysis each bears, to light.
For my part, I am left to assume that both Danny and Tom were among the very late group of Uncle Gnarley readers which often catapults the Blog’s pageview counter into overdrive. Can it be that the two have become so enthralled with narratives like “In Praise of Public Floggings” and “The Limits of Partisanship” that they crave to hear more?
Tommy Williams’ finest moment might have been when he attributed a quote from the public floggings article to Dave Vardy.  He was forced to beat a hasty retreat, having been informed of his error. Of course, he had no apology!
In his parting interview with the press, Danny was critical in two instances of the comments Vardy and Penney had made in answering questions.
The first was a reaction to Vardy’s reference to what rural residents of Newfoundland and Labrador are doing to reduce electricity, which is to burn wood for heat. Mr. Williams asked if Mr. Vardy realized that wood couldn’t replace electricity. Imagine Mr.Williams not having heard of the invention of the wood stove.
The second related to a comment that Ron Penney made about the end of the Upper Churchill contract in 2041 and whether the mechanism of expropriation should be employed. Williams would know that the issue is both complicated and moot, too. It is possible that his mistaken expropriation of the Abitibi Grand Falls Mill – which left the Feds with a large bill after valuation and the Province another one for demolition and environmental clean-up – still weighs.
But to the point, the worry is that, for Williams, the exposures from the Inquiry are less about the facts than about scoring petty victories.
Whatever we make of Napoleon’s wisdom, or lack of it, he likely knew that his failures would eventually cause him to meet his Waterloo.
A society suffering from failed leadership in the 19th century, as much as in the 21st, will exact a price. There are no exemptions, even for Mr. Williams.
Still, a little humility from one whose boastful days are covered in dark clouds, his legacy project now earning the tortuous scrutiny of a Judge, might still engender forgiveness from his once adoring hordes.
While the prospect seems unlikely, Danny Williams should wonder why, after $12.7 billion and the promise of a doubling of power rates without subsidy, he deserves any forbearance at all.
Posted by Des Sullivan at Monday, October 15, 2018