According to some observers, John Mallam, P. Eng. ought to have been — minimally — the Vice-President of Nalcor. He had served in senior roles at Hydro for most of his engineering career and rose to the position of Vice-President of the “regulated” subsidiary — utility speak for an entities under the control of the Public Utilities Board. He now serves on the Nalcor Board of Directors.


On the witness stand at the Muskrat Falls Inquiry, Mallam did not seem to fit the pliant mould that afforded cronyism to run rampant at Nalcor's senior level. Upon Nalcor’s creation, becoming the parent of Hydro and other subsidiaries holding provincial assets including Bull Arm, some senior executives were shown the door following Ed Martin's arrival.

Perhaps it was just that retirement beckoned and that it was time for Mallam to go. Whatever the case, the long-time mechanical engineer exhibited for the Commissioner a level of confidence, clarity and expertise that spoke to why he had been given leadership roles in the Province's once-esteemed Crown Corporation.
Mallam didn't need to say a whole lot. But what he did say had impact. Mallam came ready to drop a bombshell about how Nalcor had lowballed the whole Risk Allocation for the Muskrat Falls project. 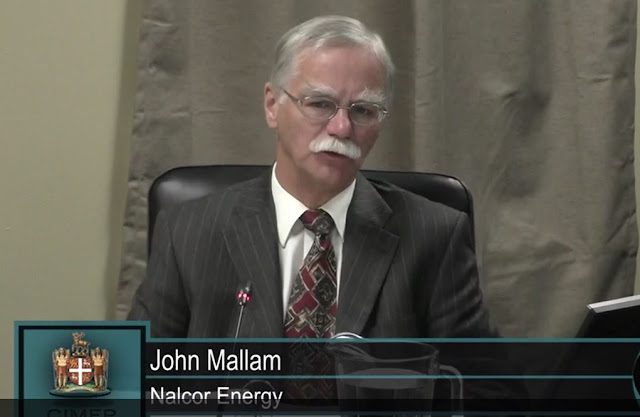 In place of adding to the confusion around the employment of a P factor (rating given the probably of cost under or over estimation) and the failure of Nalcor to apply sufficient contingency risk reserve, Mallam brought clarity to the not-so-simple issue (unless, that is, you possess the iron ring of the engineering profession). Contingency allowances are added to estimates to take care of everything from lack of project definition, incomplete engineering design, inflation, weather, labour scarcity, productivity — and everything in between — especially the Project Schedule. The Contingency Reserve was also an issue of concern for the Forensic Auditor.
Grant Thornton reported that, among other things, Nalcor's decision to lowball the Contingency allowance resulted in the project Risks not nearly being covered. An allowance for Risk — which manifests as overruns.

GT noted that Nalcor may have understated project costs of about $1.3 billion and that the estimate at Sanction ought to have been $7.5 billion (plus financing costs).
Mallam suggested that that even Grant Thornton’s estimate may have been too low. He was a Member of the Independent Project Review (IPR) , a “Cold-Eyes" review team chaired by Derek Owen, an experienced oil industry project manager.
Mallam notes that an updated Risk Assessment was not available to the IPR but believes that Nalcor had only allocated a 10% contingency, when he suggested that the figure should have been much inflated - by “25-50% or higher.” He stated that the cost at Sanction might have been over $8 billion. Concerned Citizens Coalition Legal Counsel, Geoff Budden, doing the math with Mallam, suggested that an even better figure might have been $8.4 billion. Mallam stated that was the right place to start.
Mallam based his assertion on published studies conducted on projects at a similar stage of development. Asked what the perfect P level is, he replied that a P90 is not always realistic. He suggested P70 or even P50 could have been used for Muskrat, but only if the project was more developed (including the engineering) to justify the lower contingency reserve.


Mallam joined the entire IRP Committee in reserving the harshest criticism for the Contingency allowance given the Construction Schedule — which contained no “float” or period of time to allow for delays. Mallam suggested that six months to two years was necessary for this purpose. The project is now two years behind the original February, 2017 Schedule.
The Schedule was given a P1 — or a 1% probability of being met. He noted that the amount of contingency applied to the Schedule was “negligible”. As GT confirmed, Nalcor announced the 2017 target, knowing that it had no chance of success.


IPR Chair Derek Owen took the Witness Stand at the Inquiry in the afternoon. Owen took some considerable time to explain when different P factors might be employed. But as to the Contingency Reserve for Muskrat, he left no doubt that the whole Committee had been like-minded on the matter.  He also confirmed that CEO Ed Martin was informed of the observations of the IPR team and that he seemed “surprised”.
Eventually, Martin will be able to tell the Inquiry why, in spite of the warning, Contingency remained recklessly low at Sanction. He can also inform us why $500 million Strategic Reserve never made it into the project costs, got hidden as a management reserve, and was omitted from the calculation that favoured the project.
Perhaps he can also tell us why the public was never told.
Posted by Des Sullivan at Thursday, October 18, 2018