COVID-19: THE NEW COVER FOR DELAY AND OVERRUNS AT MUSKRAT

It took a Commission of Inquiry to uncloak the deceit that flowed from the Offices of former Nalcor CEO Ed Martin, who thought he should be the one to define the “lowest cost” option and the extent of “cost overruns”.
It seems Stan Marshall is finding some of the tools of deception that Ed Martin left behind.
The Muskrat shutdown — a precaution amidst the COVID-19 pandemic — is now to blame for Marshall’s failure to “finish strong”. “The end is in sight, even through the fog of the COVID-19 pandemic,” the CBC quoted the blustery Stan, neither the CBC nor the CEO willing to measure the fog of incompetence that still inhabits the Crown Corporation.
Finishing on time was never a possibility — at 2% from the start. “Finish strong”, the mantra of the current CEO, is just one more boast that history will record was whipped up more by ego than insight.
Marshall even asserts that COVID-19 “makes it difficult, if not impossible, to be definitive on cost and schedule at this time.” Stan’s $12.7 billion completion figure is history. Even $13 billion melted faster than a snowflake on a trapper’s stove. But, have no fear: "Muskrat falls will be completed a year from" - with a caveat. "All this assumes", says Stan, "the pandemic remains contained, and will not cause us to suspend commissioning again." Who could possibly consider that any other cause might interfere? Might continued incompetence even be a possibility?
The generosity of public money might have been interpreted as the reason Marshall recently dismissed questions about penalties against GE Grid Solutions. That’s the outfit that was supposed to have transmission software ready by the deferred date of August 2019. Stan didn’t say if there is a toss-up between NL and GE as to which is the biggest financial basket case, but he might have mentioned a couple of other reasons the bill didn’t get sent to GE. 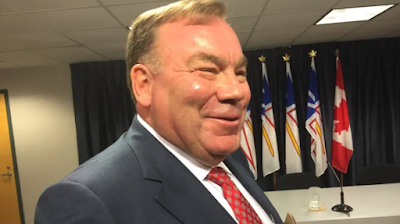 It was with Nalcor’s permission that GE advanced the software from “Factory System Test” to “Factory Acceptance Test” earlier this year, a key step to completion and a likely mistake on Nalcor’s part, according to the Liberty Consulting Group. Liberty discovered that “a significant number of material test failures” were experienced and Nalcor ought to have been aware of them before permitting the software to move to the more advanced testing stage.
Then, too, the synchronous condensers are undergoing massive re-work, without which the power grid would be completely unstable. One turbine may be put into service for a few minutes soon to produce power for an impressionable media. But such a brief shot of juice won't facilitate complete testing of the GE software, anyway. Stan chose not to say those things.
The condensers have been rendered useless by vibration and binding issues. The concrete foundations, built to support the heavy equipment, were improperly installed. Perhaps Stan can send Gilbert Bennett out to explain why he put an electrical engineer in charge of that civil engineering project!
Indeed, without the Liberty Consulting Group, acting for the PUB, the public would never know key details or the dimension of the problems that continue to threaten delay — and increase costs.
Liberty has already warned that Muskrat power will not be available next winter. That is the fifth year with Stan Marshall at the Nalcor helm. Remind me again what he brought to the Project?
Even the January blizzard was invoked by Marshall as contributing to the Muskrat delay. It surprised no one that Astaldi wasn’t aware that winter came to Labrador. But Nalcor, too? Stan, Gilbert and Paul — the three are cozier than a party on Italy’s Amalfi Coast!
As some say, it’s an ill-wind that doesn’t blow someone some good.
But a pandemic?