MORE "INCIDENTS" ON LIL PILE ON COSTS AND POWER INSECURITY

A new “Major Incident Announcement”, reported internally at Nalcor and, otherwise to the PUB, reports additional damages to the Labrador Island Link transmission line (TL). It stated that “While conducting repairs to the electrode on conductor 1…the electrode conductor 2 broke and fell to the ground.” The Report is dated 02/07/2021. It also states that during the operation, pieces of ice fell to the ground “in the vicinity of employees” causing work to be stopped pending an “evaluation” and preparation of a “safe return to work plan.” (Nalcor should clarify if this was the incident that occurred on February 3, 2021 so that the public can see how many of those incidents have occurred and when.)

Nalcor’s reported an earlier January 11, 2021 incident, made to a select mailing list, about damages on 8 towers (the electrode cross arm circled in red in the picture below is reported by Nalcor as the location of the damage on the towers . We now learn from the Liberty Report for the PUB that "16 areas have been identified as experiencing electrode line conductor damage..."

Multiple engineers have confirmed for the Uncle Gnarley Blog that the damages from icing on the LIL are far more serious than Nalcor admits.

Reports also confirm that Nalcor has asked Valard, the original LIL contractor, to organize a crew of more than 50 workers, based in Goose Bay. Another crew is situated in Forteau, to begin the repairs. Valard has a contingent located in Churchill Falls where they are completing an insulator replacement contract.

The latest towers requiring repair are located about 70-80kms along St Paul’s River Road in the Crooks Lake area which is about 25 kl west of DC2 on the map shown (below); that is about 150 kl. southeast of Goose Bay. 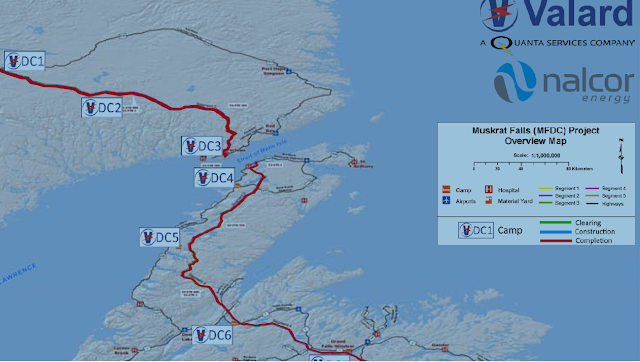 Upon reviewing the brief incident alert, one engineer consulted indicated this raises major concern for tower structural reliability.  “Presumably Valard, a leading transmission line builder, sent a very experienced crew and should have been able to do this work without incident.  The loss of Electrode Line 2 with workers on and around the towers is something of a stunner.  Cold weather repairs with higher line tension should have been included in the design.  The loss of one wire this early in the life of the system is bad enough but to have another fall off during a repair, really seems to point to unforeseen critical weakness in the tower design.  An independent design review appears warranted”, the engineer advised.

Limiting massive structural damage, advises another Engineer, are ‘anti-cascade’ towers situated every 2 km from a given section.  ‘Anti-cascade’ towers are used because other towers can’t be relied upon to resist damage from sudden unloading of the cable tension, in the case of a dropped line.

The second engineer advises that, considering the same difficult weather conditions that affected a very large area, we should expect to hear of even more damages when a full inspection is completed.

Local reports suggest that icing as thick as 10 inches had built up on the transmission towers.

The engineer notes that the problem of the latest tower failures is magnified, because they are located in an area very difficult to reach, except from the air.

Damaged towers within 140 kl or so of Goose Bay are an ‘easy’ fix “for a good contractor”, he suggests. But that is only because, in that area, the line runs along the Trans Labrador Highway (TLH). Away from the TLH, farther southwest - after the “first 140” – access and off-road conditions are a “logistical nightmare”, especially if big crews and heavy equipment are required to make the repairs. In the St. Paul’s River/Crooks River area bridges were pulled back after construction of the line was completed. The Liberty Report notes that some repair sites require "snow clearing of approximately 65 km. (For reference purposes, this is equal to 3 times the length of the Witless Bay Line.)

Ground access is a massive problem when snow volumes are large. Labrador has gotten a lot of snow this winter (except Labrador is always the recipient of those superlatives). Access during the spring thaw is almost impossible.

The engineer states that a “fix” required midway between DC2 and DC3 (denoted on the map above) could require a repair time of 4-6 months. He adds: “any access to these towers will require ‘A LOT’ of clearing if heavy equipment is necessary.”

Nalcor’s problems on the LIL are of their own design and are likely only beginning. The "return period" is a metric that indicates the capacity of the system to withstand loading pressure from icing or other forces. Newfoundland Power’s Consultant confirmed for the PUB that the LIL has only a 50-year return period.

The Commission of Inquiry advises that they found “no evidence that a decision to increase the return period of the line was ever made…”  The Commission stated that “A 1:500-year return period is suggested for high-voltage lines that “constitute the principal or perhaps the only source of supply to a particular electric load.”” (Vol 1, p. 40) This standard was sacrificed by Nalcor in pursuit of project sanction based upon the anticipated savings from closing the Holyrood Thermal Generating Station (HTGS).

The Commissioner stated that Nalcor’s refusal to account for a higher return period is “consistent with Nalcor’s pattern of underestimating the likely costs prior to Project sanction.”

The current situation on the LIL offers many lessons; some of them we have heard before.

Perhaps, the most important is this reminder: If Nalcor had been permitted to shutter the HTGS, the Avalon Peninsula would likely now be in the midst of #DARKNL.2 - just 6 years after the first debacle, in January 2014. If the public is still oblivious to the inadequate AC power transmission capacity to the Avalon, they need to know that the problem is still not remedied. Only a functioning HTGS can compensate for a failed DC Link from Muskrat Falls.

In addition, while the commissioning of Turbine #2 is a shambles, only a trickle of power from Turbine #1 is being transmitted over the LIL as a result of these ice related damages. This should serve as a reminder of the economic and life safety risks that accompanied Muskrat “madness”.

The PUB’s decision to reduce the frequency of the Reports on the LIL provided by the Liberty Consulting Group, from monthly to quarterly, is both unwise and untimely. It is also a decision that threatens transparent oversight. After the abuse of process that occurred prior, during the DG2 Reference, and after project Sanction, who should know better than to let their guard down?

The public has never received meaningful disclosure from Nalcor or GNL. They have not received it in the present situation either – not from Nalcor, not from the Minister of Industry, Energy and Technology or his predecessors. Still, for Andrew Parsons to not be out front on this issue - showing Nalcor some leadership in matters of transparency and truthfulness - does not augur well.

For the public, it is too late to look for disclosure when the lights go out. But, if there is a silver lining to be found in this new and emerging issue, it is that Holyrood can never be shuttered, NEVER, without an alternative back-up Plan. Sensible people should flog Nalcor's "international experts" - or a GNL politician - if the idea is raised ever again.