FUREY’S ELECTION CLAIM NOT A “MODEL” OF HONESTY

Premier’s Furey’s claim that he had a window of opportunity to call a General Election when “the (Covid) numbers were low” and that “no one could have predicted the outbreak that occurred” simply does not square with the facts.

The two leaders of the Opposition and the media are right in calling on the Premier to release the probabilistic modelling data “from different jurisdictions” that he says helped him make the call.

At this point, the issue is less about an ill-timed election than it is about the Premier’s integrity. Furey could have said that the Covid numbers in this province were low – and they were – and that he took a gamble - and lost the bet. That is not what he claims, however. He has  fabricated an argument around evidence of “modelling” for which no known agency has claimed ownership. The knock-on implications of his assertion should not be dismissed either.

Had Furey said that by “other jurisdictions” he meant the Public Health Agency of Canada where Dr. Theresa Tam is the Chief Public Health Officer, the public could have taken comfort that he was, at least, consulting people with credentials.

Except that Dr. Tam would have given him no encouragement to proceed.

Here is the proof: On January 15th – the day of the election call - the Agency released a 13-page analysis called “Update on COVID-19 in Canada: Epidemiology and Modelling.” The study showed that the pandemic was worsening in many provinces; it called for a redoubling of efforts to avoid the requirement of doctors to make “impossible choices” about who might get an ICU bed.

In this province, an unmonitored system of quarantine combined with the movements of 10,000 “rotational” workers – many working in Covid-19 hotspots, especially in Alberta - require that we take national trends seriously.

The Health Canada Update gave a “short-term forecast” in which Premier Furey ought to have been most interested. It warned of a “continuation of rapid growth” in the spread of the virus. It offered a longer-range forecast too: “Overall for Canada, we remain on a rapid growth trajectory”.

Dr. Tam’s Update counselled “quick, strong and sustained measures are needed to interrupt rapid growth and maintain COVID-19 control. We must redouble efforts,” the Health Agency suggested. Even PM Justin Trudeau wasn’t out saying we need an election as much as he might have liked the idea. He said that “We need to keep reducing in-person contacts (and) it is “the only way to get these numbers down.”

Now, partisans have a strange way of condoning, even forgiving, the deception exhibited by their favourite leader. Republicans in the U.S. are not the only deniers, as much as some believe.

Lest one think it unfair to point out the warning from Health Canada hours after Furey announced the general election, a December 11, 2020 Update from the same Agency also warned: “Short-term forecast indicates continuation of rapid growth” and stated that the “Longer-range forecast shows overall...Canada (remains) on a rapid growth trajectory.”

Had that Update offered a contrary prediction, we might cut Dr. Furey some slack. But as it stands, the evidence is not going in his direction. 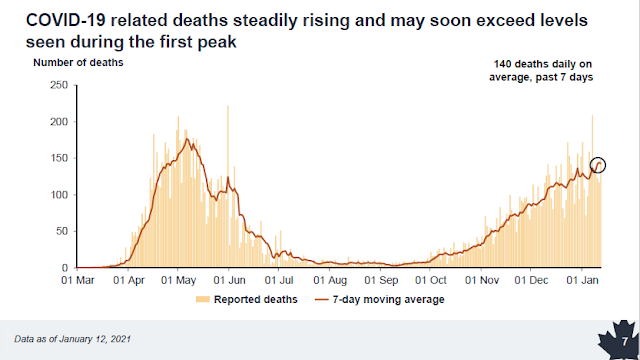 Reportedly Dr. Furey has a masters degree in epidemiology; he would have known that that all the signs - based on the science of predictive modelling - pointed not to fewer but to increasing outbreaks and spikes across Canada during the winter and into the spring.

He knows, too, an election is a contact sport; it is among the least effective ways to safeguard against community spread of any virus, especially one as virulent as Covid-19 and its variants.

That said, who did Dr. Furey consult in the hours before he arranged to visit the Lieutenant Governor?

Obviously not Dr. Tam who would have graciously offered him a "heads up"  and reminded him of her December 11th missive, too.

Likely, Dr. Fitzgerald’s staff had already known of the latest Health Canada forecast, so her Office is another unlikely source of encouragement for the election call.

Highly respected scientist, Dr. Proton Rahman, confirmed last week that due to the absence of specific local data for infection, predictive modelling of outbreaks in this province is “not possible”. Furey certainly did not act on his advice.

So, again, who did Furey consult?

The public right to know includes confirmation as to whether another Agency – private or public – is handing off “voodoo” statistical analysis, giving it the pretense of science.

Based on Premier Furey’s assertions, Health Canada might now be wondering if politics causes deceptive lapses of a kind even more easily modelled than viral spread!

Seriously. The Premier needs to “fess up”. He should stop using the screen of Cabinet confidentiality on which he still relies, giving cover to a “gamble” that was his toss; one that has left a province in crisis in even a greater mess.

The province will muster through until a new Government is constituted. What it will not be able to endure, however, is another Premier lacking the capacity to be forthright.

It is not a good start from a fellow from whom much is expected. While people rightly lament the absence of a duly constituted Legislature, if all they get is a leader that possesses neither the ability to speak honestly nor the spine to “own up” when mistakes are made, the election outcome is of little consequence anyway.