THE CONTINUED BECLOUDING OF ELECTRICITY PRICES by JM

On July 12, 2014 the CEO of Nalcor wrote a Letter to the Editor which was entitled “Muskrat Falls Remains the Best Option”.   Its intent was clearly to counter some of the recent discussion about the final costs of electricity within the province.  Unfortunately, it did little to remedy my concerns about where electricity rates in the province are heading.
We should begin with a simple clarification.  Nalcor CEO, Ed Martin quoted that:

“In 2018, electricity rates for households on the island are projected to be 16.4 cents per kilowatt hour (kWh), which is about $249 for an average monthly bill, approximately half a cent higher than the rate estimated at sanction of the Muskrat Falls project (15.9 cents/kWh)”.
Unfortunately,  Mr. Martin is not correct.

At project sanction the rates projected by Nalcor was 15.2 cents/kwhr. 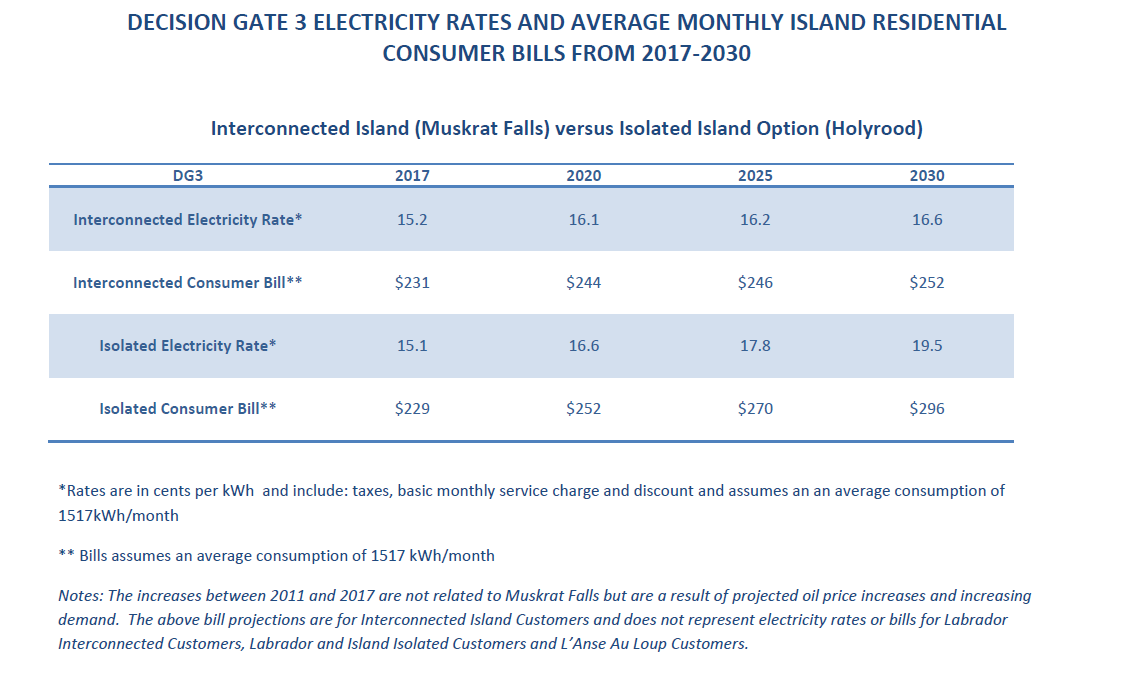 Therefore, the increase from project sanction is 15.2 to 16.4 cents per kwhr, or about 7.8%.  This is not a major discrepancy, but unfortunately it continues to undermine Nalcor’s credibility when it comes to rate projections.

The next sentence in the letter contains the following:

“Looking out to 2020, electricity rates will be around 17.3 cents/kWh or about $262 for an average monthly bill. This includes anticipated rate increases with Muskrat Falls in service and all planned capital projects by Hydro on the island”
This statement provided slight comfort as it confirmed that the cost for the third line to the Avalon was correctly included in the projections at project sanction[1].  However, we ought to ask: does the phrase “on the island” imply that the planned third line to Labrador West is not included in these rate projections?

Nalcor continue to obfuscate the discussion about rates by not providing clear language within these public releases.   Why, I wonder, can they not simply release to the public a detailed assessment of how the rates are calculated?

All Nalcor need do is release a basic excel file detailing the items what items are included in the calculation, and their cost.  This information would be of enormous assistance to interested parties.  It will eventually be released to the PUB, so why not now?

The very next sentence within the release was perhaps the most disconcerting:

“When Muskrat Falls is fully operational and our province is powered almost exclusively by renewable energy sources, rates will stabilize for customers, increasing on average around one to two per cent per year”
To the casual reader the statement may seem innocent, almost comforting.  However, it represents a major departure from the original plan.  Part of the argument for Muskrat Falls was that rates would stabilize over time.  Following the initial rate shock, prices would effectively stay the same.  With the passage of time, inflation would ensure that the real cost of electricity would decrease.

As far as the Author is concerned, this was the only real reason to proceed with Muskrat Falls.  Over time, the unit rates would decrease in real dollars.  Now Nalcor are projecting that following the initial 46% increase in electricity rates (2011 to 2017)[2] rates will continue to increase 1-2% each and every year!  This is best communicated graphically[3]: 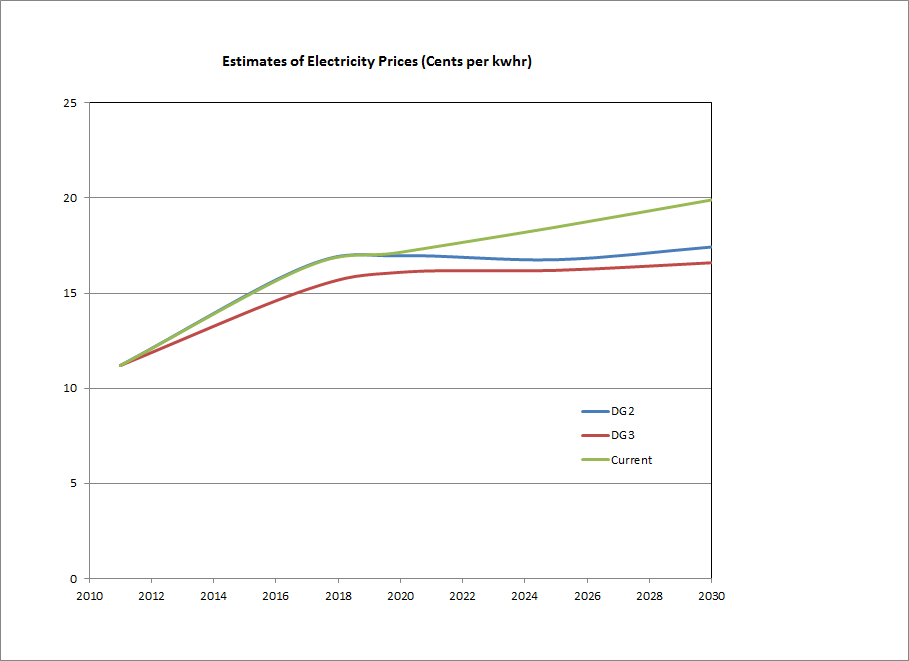 Nalcor should be challenged to immediately verify this statement regarding rate projection.  If true, it reflects a major departure to the rationale for the project. Indeed again, if true, it suggests the online rate calculator, provided at DG3, was incorrect and misrepresented the benefits of the project.  Likely, it implies that the Power Purchase Agreement (PPA) has been adjusted to further backload the cost recovery of the Muskrat Falls project.

Nalcor has never had a consistent message when it comes to the pricing of the Muskrat Falls project.  Since the DG2 decision they have refused to provide the public details about the stand alone cost of Muskrat power delivered to the Avalon Peninsula.

Nalcor need to clear the air, share the numbers, and let people have transparency.  Nalcor need only to look to their partner for such guidance.  Emera’s submission to the UARB is a benchmark in public disclosure, and education.

Nalcor need also to provide visibility on the additional sensitivities which will potentially have a further, dramatic impact on the rate projections.  These sensitivities were assessed by the Author in Volume 11 of the discussion paper series  and are again provided to the reader:

*    Hydro Quebec are successful in their declaratory judgement regarding the
interpretation of the 1969 Power Contract.

*   Third line to Labrador West which government has advised will be partially recovered
by the island ratepayer
* Vale and other industrial customers are provided energy at a lower, subsidized rate.

*    There is a 5% reduction in the amount of energy used, due to the massive increase in
the price of energy in the province.  Price will impact demand.

Nalcor’s strategy, to date, has been to becloud the issue of what this project will ultimately cost, and the nature of the real risks to the Island ratepayer.  The public should not accept such a situation.

Given the size of the expenditure and Nalcor’s behaviour, it is not difficult to see why Muskrat needs greater public oversight.  Indeed, Nalcor’s abysmal record of meeting project estimates should demand it.

[1] If the reader references Figure 4 of Volume 11 of the JM discussion paper series "Consumer Electricity Prices From Muskrat Falls" there is a slight peak on the “existing asset cost” from 2012 to 2016.  Can it be assumed that this is the cost associated with the third line?

[3] The sources of information are:  DG2 data is from PUB-Nalcor-5 provided on the PUB website; DG3 data is provided from the table referenced above; Current projections is based on the July 11 letter to the editor.