Faced with having to admit “cover-up” at Waterford Valley High, the Department of Transportation and Works asked the contractor to accelerate installation of the lateral steel supports which were overlooked during the construction of the School.

Double overtime, nearly $100.00 per hour, was the incentive for workers to work longer hours.

Originally, Government was prepared to continue to let the School operate until Christmas, even though the building failed to meet National Building Code standards. The disclosure of this second “cover-up”, the first occurred at Roncalli, caused the work to be rushed. As a result, the final lateral support was installed at the end of last week.

This should not be the end of the matter. 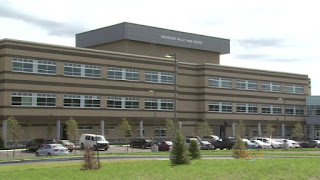 When this Blog demanded that officials within the NL Eastern School District, and the Ministries of Education and Transportation and Works, produce proof that a structural engineer had “signed off” on the structural work, prior to opening in September, senior bureaucrats stonewalled. They hoped the issue would go away.

When the phones started to ring, following the Blog Post, a senior NLESD official was forced to explain the problem.

Parroting Transportation and Works officials, NLESD told them: “Inspections of our school identified some walls requiring lateral supports; these are partition walls between classrooms” (Underline added).

Parents were supposed to read the word “only” into the phrase "these are partition walls".  The NLESD downplayed the importance of the missing steel supports.

The NLESD spokesperson did not tell parents that the concrete block walls weigh several tons; that the purpose of the lateral supports is to prevented them tipping over; that the construction is very similar to the wall that collapsed at Roncalli School.

The NLESD also did not tell parents the failure rendered the school “NON-COMPLIANT” under the National Building Code – and thus, unfit for occupancy.

The contractor’s failure to complete all the steel structural elements left two possibilities. Either:

a.         The certification by the structural engineer was improperly issued; or
b.         No certificate was issued (i.e. that officials unilaterally took a decision to open the school without any “sign off”)

The comments of the engineer who advised this Blogger bear repeating:

“There is no grey here; either the walls conform to National Building Code standards or they don’t….the Code is very precise; the structural members, including those missing lateral supports, are required to accommodate all the loads which the design engineer has calculated and on which he would have based the design specifications. So, someone has made a decision to occupy a sub-standard structure.”

Politicians and bureaucrats hope they have escaped rebuke and an admission of complicity.

They should not get off so lightly.

Let’s be clear about two matters:

First, when this Blog issued a call for the immediate release of the Structural Engineer’s Certification on Friday, November 6, 2015  the demand could have been met within 5 minutes. NLESD could have, and should have, attached a copy of the Certification to the email it sent to the parents.

But the Certification was not produced then, or since.

Second, while no politician or senior bureaucrat should be excused, the behaviour of NLESD must be singled out.

Accordingly, if the CEO of NLESD cannot provide proof of the structural integrity of Waterford Valley High School, when the facility opened in September, he should begin the parade of officials tendering their resignation. Those involved, in the two government Departments, should follow.

This is a lapse of judgment that cannot go unpunished.

Children need educators who have their back.
Posted by Des Sullivan at Thursday, November 19, 2015