When NLESD chief, Darrin Pike, gave a tour on September 3rd, 2015 to Premier Paul Davis, the cabinet, and community members, the brand new $38 million Waterford Valley High School was not ready for occupancy.

But the 800 students of the school and their teachers were permitted to start classes anyway in early September. They could not have known a “cover-up” was underway.

The contractor had failed to install steel wall supports which were part of the structural steel package necessary to warrant a “sign-off” from the structural engineer.

The metal braces are supposed to be bolted onto the classroom ceilings. The end of each rectangular plate butts up against the cement block walls to support them. Each classroom was supposed to have several of the braces installed as per the design documents.

Though the contractor neglected to install the structural supports, the School opened anyway.

No one disclosed the problem to the public. 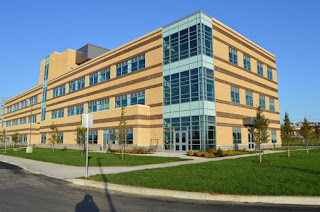 Not one of those authorities undertook to inform the public, or even the parents of the 800 students.

This is the second time in as many months this blogger has exposed deception by those same governmental authorities.

Uncle Gnarley Blog revealed, on August 31, 2015 the “cover-up” of a collapsed concrete block wall at the Roncalli School Extension at Airport Heights.

On Monday, October October 2, 2015, based on information obtained under Access to Information legislation, known as ATTIP, a Blog post confirmed that the same authorities kept the School open, despite being forced to close a fire exit for fear the communicating wall might also collapse.

An almost complete failure to perform inspections on the contractor’s work was a major contributing cause of the structural problems experienced at the site of the $20 million Roncalli School Extension.

At Waterford Valley High School, welders work into the night; they can only start work when classes are finished for the day.

The T-Bar ceiling is removed and installation of the neglected structural work begins. The job will require several more weeks before the school meets National Building Code Standards. 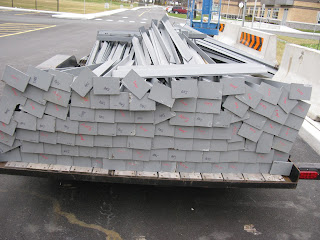 The structural steel, erected at the early stage of construction, has already been sprayed with fireproofing insulation.

The space above the ceiling tiles is full of wires to hang the ceiling, plumbing, duct work and electrical wiring. The structural supports, laying on a trailer in the School parking lot, must be lifted individually and navigated through the maze and fire proofing insulation, some of which is removed before the missing supports can be installed.

Before school starts each morning, everything must be cleaned up and the ceiling tiles put back in place. Presumably someone will have to go back in later and apply fire proofing to the newly installed supports.

Cover-up and deception appears to be a recurring theme of this Government. Not just politicians, but senior public servants, too, seem to have embraced the practice.

There will have to be a public accounting by all.

While the 800 students, and their parents, waited a long time for the Bishop’s College-Booth Memorial replacement, no parent wants their child attending a school unsafe because structural elements of the building are missing.

As it stands, Waterford Valley High School is not ready for occupancy.

The school should not have opened.

The public should demand answers.

COVER UP AT RONCALLI