Indeed, the contracting structure is so complex that the utility of their release to the public is moot, as no private individual or interest group could ever afford the legal team to review them in detail.

Retrospectively, the greatest injustice to our own 2012 PUB review of the Muskrat Falls project is that the Emera deal was not included in the terms of reference.  The current PUB investigation into the reliability of our electrical system, after Muskrat Falls, clearly demonstrates the importance of the Maritime Link to the future of our electrical grid. The exclusion of the Emera deal is another example of how political decisions railroaded this project, to the detriment of the public's long term interest.

Make no mistake Emera and Nova Scotia are the principal beneficiaries of the Muskrat Falls project.  The original 20 for 20 deal, (20% of the energy for 20% of the cost) has now been revised by conditions imposed by the UARB.  Nova Scotia ratepayers will have access to nearly 2500 GWhr of energy (~50% of the energy), while paying less than 15% of the total project cost.

Table 1:  Summary of Project Costs (Not Including AFUDC Amounts)

In addition, as discussed recently in my post on this Blog entitled Are You Ready Tp Pay To Power Nova Scotia?", if the UARB does not approve the current application by Emera for early commissioning of the Maritime Link, Nalcor may be exposed to a portion of the “Unapproved Overrun”.  The decision could cause Nalcor to be exposed to costs of up to $100 million over the next 3 years.  Such an outcome would place significant additional pressure on Nalcor’s profitability and cash flow.

Can the deal with Emera deviate any more from the original sales pitch made in 2010 by Premier Williams?

Following last week’s post, a colleague of mine directed me to the most recent investor relations presentation  from Emera.  It contained an infographic on the Muskrat Falls project together with the quote – “Emera to invest 600 Million, for a 59% partnership capital in the Labrador Island Link” (Page 12 of the Investor Presentation). See the area within the red broken line in the Exhibit below. 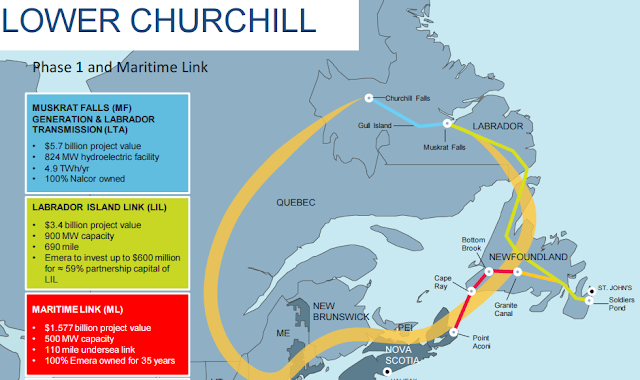 Although I have determinedly followed the machinations of the Muskrat Falls project since 2011, I have never heard of or seen reference to 59% of the Partnership Capital. It having been brought to my attention, I could only wonder what it meant.

First, to refresh the reader's memory, the original 2010 deal entitled Emera to 29% of the Labrador Island Link.  The arrangement was disclosed by Nalcor to the PUB in July 2011 (Page 27) per the terms of the term sheet signed in the same year. Emera were also entitled to own up to 49% of the Lower Churchill Project transmission assets, based on the following  principles:

LTA      100% Nalcor Owned
ML       100% Emera Owned
LIL        Percentage based on the estimated capital costs of each transmission asset at
sanction of the Labrador Island Link, adjusted when the actual costs are finally
determined.

The Maritime Link has been largely delivered on budget while the cost of the Labrador Transmission Assets (LTA) and the Labrador Island Link (LIL) have increased.  Thus if Emera are permitted to keep 49% of the total ownership, we must conclude their share of the LIL increased from the 29% level contained in the original deal.

The following table provides a summary of the calculation used to determine Emera’s percentage interest in the LIL in order to maintain the overall target of 49%.

Table 2:  Summary of Emera Ownership of LIL to Maintain 49% of Transmission Assets

Yet that is not what Emera are advising. The Company is telling investors that they have 59% of the share capital.  The obvious question is: what is this new arrangement based upon?

Admittedly, the complex legal agreements and multi layered companies in the LIL make it all hard to understand.  However, as the saying goes let's follow the money.

Below is a copy of the “Sources of Funding” provided by Nalcor.  This graphic confirms that Emera has $800 million invested in the LIL. Of that sum, Nalcor has stated that $400 million is invested as equity, and $200 million is provided under the “Allowance for Funds Used During Construction” (AFUDC). What, then, is the remaining $200 million investment used for? Does the total $600 million equity investment account for the increase in share capital to 59%? The total cost of the Labrador Island Link is now estimated at $3.5 billion.  The federal loan guarantee requires a debt to equity ratio of 75:25 for the LIL, with specific cash reserve requirements to maintain a required debt servicing level over the life of the project.  This cash reserve is what is identified by Nalcor in the above graphic, as $0.7 billion.

Again, we must ask: has Emera now effectively increased their investment to a level where they will also obtain 59% of the profits accruing to the Labrador Island Link? It is not a secondary question especially given that the Company will receive the allowable 8.8% return on its equity contribution.

If true, Emera are entitled to make $50-60 million in annual profits from the Newfoundland ratepayer.  This is a far cry from what was communicated by Nalcor at the beginning of this project.

If Emera is now entitled to that share of the returns from the LIL, as it seems, we might also ask if Nalcor’s cash flow position (and that of the government’s) forced them to go to Emera looking for additional equity contributions - just to maintain the 75:25 debt to equity ratio on the LIL as required under the Federal Loan Guarantee?  Has Nalcor used the complicated Class A and Class B share structure in the contracts to allow Emera to increase their equity while respecting the 49% limit on transmission ownership?  In short, is Emera effectively bankrolling Nalcor?

It is interesting to note that this change occurred between March 2016  when Emera - not Nalcor - advised they had 37% ownership, and May 2016 when the figure rose to 59% of share capital. Could this have been one of the final acts of Ed Martin, and the board chaired by Ken Marshall?  When did the government become aware? Are they aware of it now?

If this is the case, Nalcor and the Government of Newfoundland have silently permitted a Nova Scotia company to essentially take a majority stake in this vital transmission asset!

With annual profits expected in the $60 million range, Emera will earn almost as much on the Labrador Island Transmission system as Newfoundland Power makes over its full operation (approximately $80 million annually).

Unbelievably, we will soon be asked to commission the LIL early to supply RECALL energy to Nova Scotia in order to facilitate the UARB’s approval for the early commissioning of the Maritime Link.  Nalcor will likely have to still pay a portion of any unapproved overrun to Emera.  NL ratepayers will then be expected to pay 100% of the LIL costs – including ALL the cost overruns – while 59% of the profit will flow to Emera.

Readers might remember that the return on equity associated with the Muskrat Falls Generating Plant is back end loaded - which is to say Nalcor had intended to subsidize the rate charged ratepayers in the early years after commissioning by delaying collection of the return on equity. If 59% of the profit from the LIL is due Emera, the Province’s ability to lower rates is severely compromised. The government's ability to mitigate the predicted sharp increase in electricity rates to the consumer has largely dissipated.

Back in 2010, when the term sheet was signed with Emera, the public listened to the leadership of the province, and Nalcor.  They trusted them. They did not demand a diligent review of the project.  Now that the province is running out of cash, Emera are well positioned to take advantage of the massive over-runs on Nalcor’s portion of the project.  All the while they have efficiently executed the Maritime Link on time and on budget.

Emera are successfully building the foundations of their very own Newfoundland and Labrador Energy Warehouse.  Their success is underpinned by an opportunistic deal, and a weak partner.

How much more ammunition do we need before there are real calls for a public inquiry into this project?
Posted by Des Sullivan at Monday, March 06, 2017