THE DISPARATE RAMBLINGS OF AN INCOHERENT GOVERNMENT

Don’t waste your time reading the Liberal Government’s Speech from the Throne. It contains the ramblings of a group that can’t put one foot in front of the other.

That is unfortunate. If there was ever a time when the province needed a clear plan and someone with the ability to communicate it, it is now. In the last Speech from the Throne, the Government promised “decisive actions… with Budget 2016 followed by… medium and long term actions…” Those are still absent. Then, too, it has been a year in which fumbling — from library closures to Ed Martin’s severance — compounded by Ball's own incapacity for articulation, has left the government severely weakened.

This year it needed to be ready with a coherent document that presaged a Budget styled for crisis. It could muster no such a strategic focus.

The Throne Speech and the Budget — whether well thought-out or duds — expose the intellectual and policy depth of the government. At a time when the Ball Administration has earned one of the lowest approval ratings in the country, what better time to exhibit policy heft and the determination to turn things around.

Apart from giving appropriate acknowledgement to the Newfoundlanders and Labradorians who made the ultimate sacrifice in war, the first five pages essentially constituted a compliment to the achievements of others. They included Katarina Roxon, Kaetlyn Osmond, Team Gushue, the skilled people behind Take The Shot Productions, and others — all having demonstrated exemplary leadership, talent and persistence on an international scale. Even the chefs responsible for making the province an "international foodie destination” were recognized.

Of course, we are proud of them all. But, ultimately, the Throne Speech is supposed to describe not the achievements of others but the government's own, especially its immediate legislative and policy agenda.

The Lieutenant Governor can only have been bewildered by the onslaught of verbiage. Thirty-one pages of minutiae — not dissimilar to the last one issued by the Tories. That’s the one this Blog described as having “the finesse of a chainsaw”.

It’s too bad really. The Throne Speech was never a document that caused the public to queue for the next serving. Still, for policy wonks, public servants, crown corporations, and even external watchers like the federal government, as well as the lenders, public policy groups, and others — including Judges — the Throne Speech offers a glimpse into the intellectual prowess of a government facing incredibly challenging times. It is a record of their intentions, their political savvy, their conviction and purpose. It is an opportunity to give proof that at least some of their ideas have a shelf-life beyond the next election. 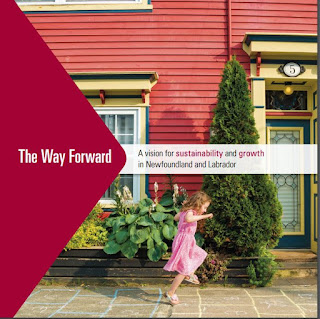 Perhaps, if these were normal times, we might not care if the government let a group of mid-level public servants paste together a litany of second-rate ideas and programs. But these are not normal times. The province is suffering a fast-unfolding fiscal crisis. We can’t afford to let the PR types in Executive Council force-feed the Premier with the innocuous and the vacuous. I am referring to “The Way Forward”, the government’s self-assessed economic and social policy road map, which even its friends have determined is disconnected from our fiscal realities.

The Throne Speech did acknowledge the burden of the Muskrat Falls project, but it offered no proof that the province would be any worse off had it been shut down. Nor was there any expression of regret that, in Opposition, they supported Muskrat, in consequence of which they miserably failed to hold the Tories to account.

It seems trite to say that a fiscal crisis deserves a singular focus. But a line or two blaming the Tories for Muskrat or castigating their free-spending ways does not constitute an appraisal of our circumstance, and is most certainly not a clarion call for collective action. No one wants or expects a government to be the voice of doom and gloom. Still, after more than a year in Office, and amid persistent claims that it will consult with the electorate, the government has only itself to blame if public expectations continue to well exceed our fiscal capacity. 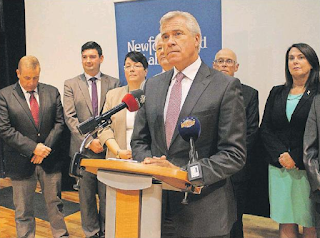 The Throne Speech lays claim to a “leaner, flatter management structure” and commits to “addressing a deficit and a debt that will overwhelm our children and grandchildren in the absence of action” but the government won’t say how it intends to stare it down. What do the claims: “we will do better with less”, “we will collaborate”, and “we will challenge ourselves to remain ambitious, responsible, and accountable” actually get you? Worse than rhetorical flourish, it contains all the portents of Cathy Bennett girding for a side-show.

On jobs — for which I have always believed every government takes far too much credit when the jobs are created, and receives too much blame when they disappear — it promises - dare I repeat it - a Cabinet Committee.

Part of its self-described vision “… includes a commitment to increase mining activity…” It is a sensible objective, but it is not a vision. And even that much contains more than one caveat: government can barely influence mineral exploration, make the necessary private investment appear, or be anything more than a bystander given the cyclical character of the international commodities market. That is the kind of chatter that exposes the government's ignorance about economic policy.

Then, too, the Speech pursues aquaculture, tourism, and food security. On the social side it comments on the “need to address mental health and addictions” and commits “to a strong health and community care system”. It speaks to supporting women, seniors, children, affordable housing and a plethora of other groups, programs and services.

But what government is not committed to those things? What Throne Speech, at one time or another, has not included all those priorities as essential items on the public agenda?

The question the public wants clarified is this: what are the Liberals going to do differently?  What are its targets? What is the time frame for their implementation? How much can it do and yet still deal — meaningfully — with the fiscal crisis? Or is all the self-congratulation and verbiage cover for kicking the can still further down the road?

In health care, for example, where the axing of 93 positions was just announced - will the lay-offs result in poorer care and longer queues? Or does the government have a new model of health care management, in pursuit of which it has spent the last year consulting with governments across Canada and elsewhere whose lower per-capita expenditures contain proof that even this country offers more effective models of delivery?

Did anyone notice that the saving from the management cuts amount to only $8 million.If we are ever to fix a $1.58 billion hole in the current account budget, the notion of death by a thousand cuts may seem far too few.

In a nutshell, the Throne Speech offers no meshing of policy, strategy, or politics. It is exactly what it manifests — the disparate ramblings of an incoherent government.

His Honor was given a grab bag of self-aggrandizing, half-thought-out ideas snatched out of The Way Forward. It seems the government expects that the gloss of a different cover might allow them to shine.

There’s still the chance that the Budget Speech will do better.