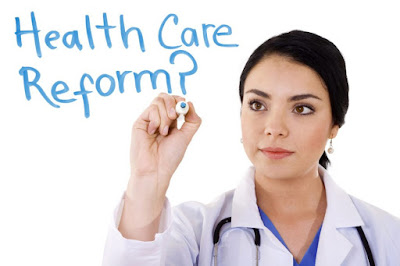 The government has stated that it plans budget balance in 2022-23 — which few believe — but the achievement over the next six budgets equates with annual cuts to health care of around $95M...a figure that is higher when the effect of fast-rising debt servicing and related costs — like the deferral of pension contributions — are factored in. But, again, let’s keep the arithmetic straightforward.

A cut of $7.6 million against the total problem of $569 million or even against $95M in one year — suggests more cuts are inevitable.

When? That’s another story, but I’ll take a guess at the end of this piece.

Still, the health care conundrum is obvious: what will the system look like if we cut over half a billion dollars from the budget — even over six years? What can we expect if we don’t?

This post is not intended to deal with such weighty topics. That will take some time, even after the Budget is delivered on April 6th.  Today’s post is intended to provide readers with a documented appraisal of the enormity of the challenge — one that is singularly ours.

The numbers are important to understand because only they can give some context to any remedy.

Secondly, it seems clear that we have to put forward a new “model” of how health care should be administered. And we have to do it soon. Creating a longer queue for health services with cuts to personnel won’t work. The inescapable fact — even if it seems cliché — is that we have to do more for less. We have to both change the system and cause operating costs to drop.

The post “Dr. Parfrey’s Refreshing Frankness“ triggered much interest. Possibly it exposed the nasty truth that we have not been good stewards of this gift of wealth, education, and technology.

The raison d’etre of Parfrey’s group “Choosing Wisely NL” needs no further explanation. They just need to get to work. We need other such groups with similar goals in different areas of heath care. We will have to co-ordinate those efforts on an urgent basis — without getting mired in hundreds of studies and slowed by an even larger web of bureaucracy.

The announcement by the Health Care Corporation of 176,000 missed specialist appointments — ‘no shows’ — last year alone, also resounds. That figure is for Eastern Health. Presumably the other Boards have a story that matches that one. Who is minding the shop? Indeed.

Is the public willing to countenance waste while queues for consultations and treatment get longer? Is health care such a 'sacred cow' that it is above scrutiny?

It is worth reminding that other provinces have managed their health care systems better.  We invoke the “rural” card — putting blame on a dispersed population — as if ours is the only rural jurisdiction in Canada.

A series of exhibits prepared by the Canadian Institute for Health Information will help provide a better understanding of this and other issues raised in this piece. All but the first formed part of a presentation by Dr. Wade Locke to the Chartered Professional Accountants in February. The remarks contained within the exhibits (mostly highlighted in red) are solely his work. Outside the exhibits, unless noted, the editorializing is mine. This exhibit was part of the Budget document for the current fiscal year (2016-17). Health and Community Services consume $2.95 billion or 40.8% of all current account expenditures. Health care, alone, represents 36% of the current account.

Prior to 2006, NL’s expenditures remained below the Canadian average. But after 2007, as the province began to record increasing oil-related revenues, the cost of health care and virtually all government services also increased dramatically; health care disproportionately. By 2016, the cost of health services in NL had grown to 115% of the Canadian average. 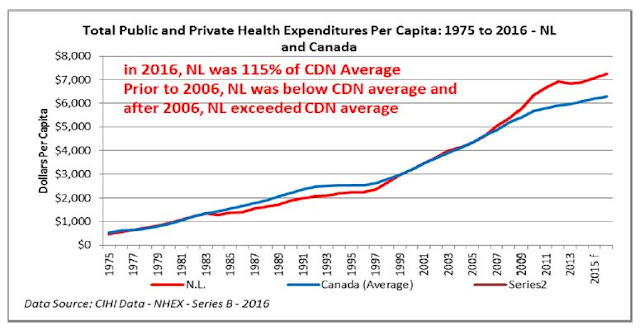 Nova Scotia, in contrast, has been more disciplined. Note in the next exhibit how expenditures in NL began leaping ahead of NS and the other Maritime provinces by 2009. 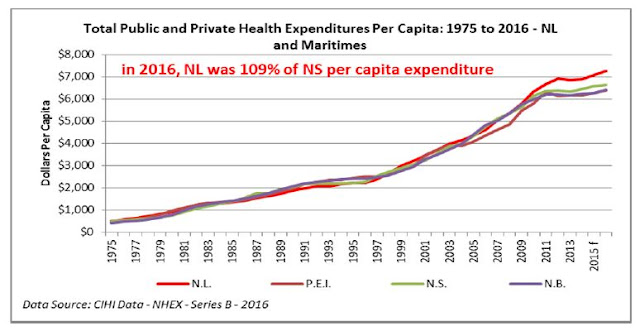 Health care costs in Ontario and Quebec did not come under the spell of a “goldilocks” megaproject economy, as they did in NL. Those provinces benefit from the scale economies afforded by a large urban population, but they have large rural areas too.

The rural card is trotted out by NL politicians even as already noted. Saskatchewan and Manitoba can easily make a similar claim. Still, we manage to spend more per capita. 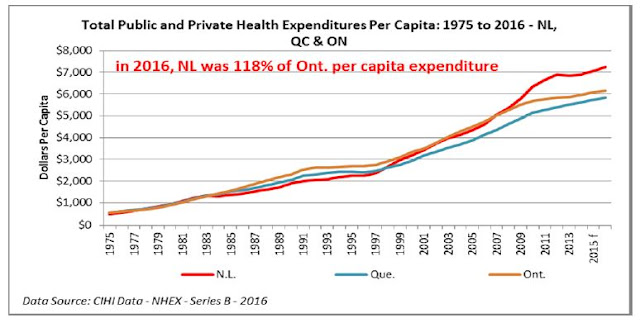 NL failed to stay in line even with Alberta (see next exhibit) which has sustained higher economic or GDP growth and higher population growth, too. 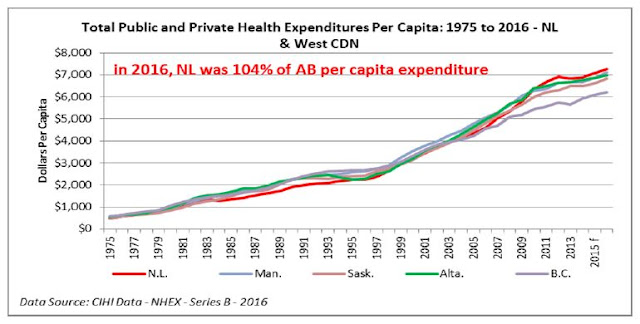 A couple of other statistics the Memorial economist used were also striking. The per capita health care expenditure on the 85‐89 age category “is 54% higher than Canadian average”. He noted: “If no other cost drivers change (doctor’s salaries, cost of band aids, etc.), then the median age (currently 45 years) person’s health cost will increase by 48% in 10 years, increase by a further 61% in the next 10 years or in 20 years time, it will cost 139% ($3,706 to $7,363) more to treat that person.”

In short, NL can’t afford the status quo — even if that is what the government chooses.

The question we need to ask is this: will health care remain a ‘free-for-all’ and broke, or can we manage it better, retain its universality, and keep it ‘free’ from both fees and queues?

Likely, Parfrey’s lament over waste of health care resources reflects the tip of the iceberg — which suggests more for less is actually possible.

What do we need to hear from the Premier and the Minister of Finance?


That politics will be taken out of health care? That would be nice. But it's too much to expect.

The government needs to take the basic steps towards a new health care management model. It should attack inefficiency, exact financial penalties on waste, provide publicly available costing for medical procedures, employ the logistics of the construction industry (though not Nalcor’s), and deal with rural medical services that are patently unsustainable.

MCP needs reform. It still pays ophthalmologists, for example, for work now largely done by machines and new technology as if they were never invented. The government's drug program is costing far too much. Physicians' compensation should be tied to any new productivity model. Telemedicine, incubated here decades ago, must be better utilized as part of rural medical services. Those are just a few items for a reform agenda.

Major decisions on the health care architecture also need to be taken.

Can we afford hospitals in both Grand Falls and Gander? The hospital in Port aux Basques, having opened a new one in Stephenville? A billion dollar hospital for Corner Brook? Certain medical services, like dialysis, in small rural centers?

If the Minister of Finance makes no mention of a new management model, you are right to despair that this government will ever intelligently deal with our fiscal nightmare.

Can we do better with less?

In a system that now spends well over half a billion dollars more than the pro rata share of total revenues — each and every year — we have no choice.

I doubt that the Ball government will see it quite that way.

Most likely, the cuts announced last week just got the bad news out of the way. I’m betting that it will kick the fiscal ‘can’ down the road — again. The Finance Minister will invoke the “Wiseman Plan” (Tory Finance Minister under Paul Davis) — based upon the most optimistic scenario for oil prices and offshore production and, of course, hope.