The report would have identified what had gone wrong, defined an immediate fix of a gap in construction or inspection practices, and determined whether anyone had signed off on any part of the installation without first performing their due diligence. In such a case, the report would have also confirmed their replacement.

Indeed, no manager - unless he is completely clueless - would ever give the OK to place concrete in forms without first knowing all the causes which led to the failure.

The scheduled work entailed a large concrete pour. It was not the last — not even close. The necessity to proceed safely — keeping in mind the schedule — would have signaled the importance of quickly getting to the bottom of the incident.

But management on the project, being what it is, did not order the concrete to be kept wet for easier removal and inspection. Days of men and jackhammers removing the material, weeks later, conjures an image too foolish to describe.

The Independent Engineer offered a glimpse into Nalcor's inspection and diligence practices in his Report dated November 2, 2016 — based upon a site visit which occurred July 11-15, 2016.  I noted in a Blog Post dated December 8, 2016 the following excerpt, the IE's Report having been released to the public only days before:

If the Independent Engineer was able to report "design issues, faulty materials [including] dry rot..." roughly six weeks after the incident, Nalcor must have known too — likely much earlier.

On December 9, 2016 I placed the following request to Nalcor via ATIPPA. Nalcor's reply is seen at the end of the excerpt:

Nalcor knew — certainly by July 2016 — why the formwork had collapsed but it had no Report to offer, even in December 2016. The investigation, Nalcor said, is "not yet complete".

On March 23, 2017 — nearing the one-year mark of the incident — I wrote, again, asking for the Report. The following excerpt confirms the request:

Another month went by.

On Monday, April 24th, 2017 Nalcor offered this reply to the ATIPPA request:

After more than a year of trying to complete (or is it hide?) a Report on a single incident — albeit one having the potential for a fatal consequence — Nalcor could not suppress its arrogance, using a rarely invoked clause to delay the Report some more.

Was Nalcor upset that a citizen had not forgotten the incident, refusing to let it to be quietly filed?

As it stands, the report will show up when he sees fit — sometime during the next 30 days.

The simple truth is that  Nalcor can count itself very lucky — based upon private reports of the incident — that they do not have to answer for at least one death, given that one or more of the workers was practically buried under the wet concrete.

What would have been wrong with Gilbert Bennett - or Project Manager Paul Harrington - standing up in front of their workers and the public as concrete began to pour again to explain what had gone wrong and the lessons they had learned.

At minimum, they owed that to the workers who nearly lost their lives.

But the lack of transparency continues - there is no leadership from Stan Marshall and none from the Ball government.

Think about it. What can Nalcor boast, if not even a good safety record?

If the public thinks anything has improved, they should look at Nalcor's project report for February, 2017 which was issued April 17, 2017. There were three lost-time accidents in that month alone. For the project to date -12 lost time accidents (see exhibit below). Again, for Hebron there were zero!

That is a disastrous record for Nalcor and no one - not even a Trade Union Head has a word to say. If Muskrat was headed by real management there would be firings and full reasons given. 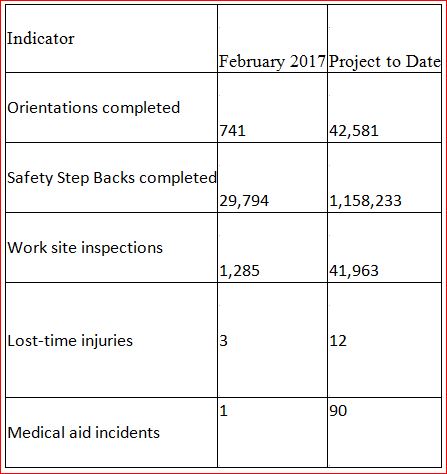 How long will the public stand for it?
Posted by Des Sullivan at Thursday, April 27, 2017